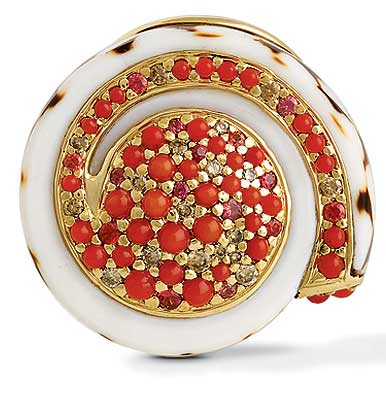 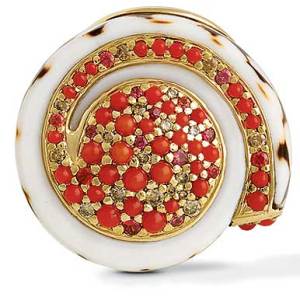 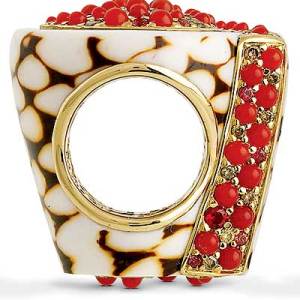 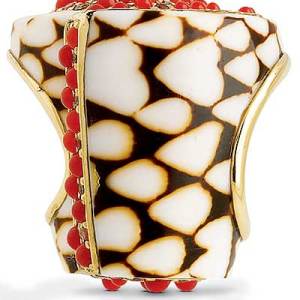 “Do you want to see magic?” asks jewelry designer John Hardy as he reaches deep into his pocket and pulls out a vibrant orange rock the size of a large grape. The nearly translucent stone radiates with a mysterious sparkle from deep within. Hardy, in Las Vegas for an annual trade fair, had just acquired the extraordinary boulder Mexican opal at a neighboring gem show from a dealer who accepted only cash. “I emptied my pockets on the table, and he took everything except my spare change,” he says, mesmerized by his latest acquisition. He envisions the stone set with deep red rubies and sparkling orange garnets in a gold ring. The design will be part of his Cinta collection, which features uncommon gems, minerals, and even seashells in imaginative, one-of-a-kind designs.

“Cinta means love in Indonesia,” explains Hardy, who lives and works on a picturesque mountaintop in Bali. The Cinta collection evolved from designs he began making for his wife, Cynthia, when they first met 16 years ago. Over the years, Hardy has become increasingly fond of making unique pieces because it allows him to create anything he desires, free from the concerns of producing multiples. “My greatest joy is making one-of-a-kind artistic pieces that won’t appear again,” he says.

Hardy’s latest Cinta series is made with exotic South China Sea seashells that are set with an ombré of sparkling colored diamonds or sapphires and fashioned into chunky rings, earrings, necklaces, and bracelets. The juxtaposition of natural shells with sparkling, brightly colored gems is particularly striking. Another new design features rutilated quartz that he discovered in India and set into voluptuous round rings and pendants accented with colored gemstones.

Hardy’s boyish enthusiasm and fascination with gems keep him constantly searching for unusual and unexpected stones and materials. Cinta gives him the opportunity to be more experimental and adventurous than do his flourishing sterling silver and gold jewelry and home collections, which are intended for a broader audience. “The Cinta pieces can be hard to sell because not everyone understands the magic and rarity of the gems,” he explains. “Sometimes I simply can’t part with certain pieces, and those go to Cynthia.”