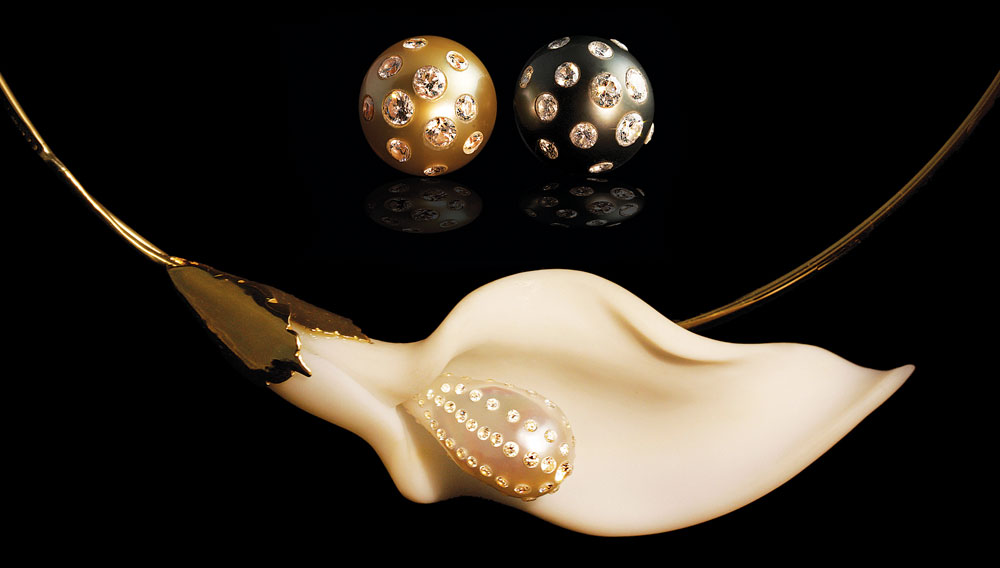 Nearly a decade ago, after a long operation to repair an intracranial aneurysm, Dr. Russell Trusso, a Cleveland-based neuroanesthesiologist, left medicine with a life-changing resolution. He was determined to launch a new career that would enable him to give expression to his long-suppressed interest in the arts: He would become a jewelry designer.

Trusso approached his new vocation with the same seriousness he had given to his medical career. He served as a goldsmith’s apprentice for nearly three years, during which time he mastered age-old techniques such as melting and mixing his own gold alloys and stretching gold nuggets into sinuous wire. He applied his nimble fingers and skill at handling fine-precision tools to transforming gold, gemstones, and pearls into intricate designs. When he decided it was time to strike out on his own, he built a glass gazebo that doubles as a studio on the grounds of his home. This workspace also gratifies his passion for horticulture, offering views of his elaborate gardens and orchid-filled greenhouse, which are filled with the exotic blooms that provide the inspiration for his jewelry.

For a recently completed necklace, Trusso plucked a perfect calla lily from his garden, dried it in silica gel and sand, and sent it to a master stone carver in Idar-Oberstein, Germany, a town renowned for its carving traditions. The artisan precisely replicated the flower in smooth, white agate and returned it to Trusso, who set the sculpture with a large diamond-studded South Sea pearl and placed it on a simple gold-wire necklace. Other objects in his collection of jeweled botany include a series of gem-studded, handpainted enamel orchid brooches and flower pieces carved in turquoise, jade, amethyst, tourmaline, onyx, and other semiprecious stones.

His celebrated Dew Drop Diamonds designs, which resemble drops of water and feature pearls embedded with diamonds, expand on these garden motifs. “I like the contrast of sparkling diamonds set in an organic substance without any metal,” says Trusso, whose pieces exude a feminine elegance. To achieve this sublime subtlety, he collaborated with a scientist who specializes in adhesives to create a substance that enables him to secure the diamond to a small seat carved in the pearl; this transparent adhesive, for which Trusso is in the process of obtaining a patent, allows light to reflect within the stone.

The availability of Trusso’s pieces is limited because of the time it takes him to craft each component and set the gemstones by hand. He refuses to train artisans to work for him, and he values the authenticity of his work over commercial success. “If I trained others to help make the pieces,” he says, “then they wouldn’t be mine.”