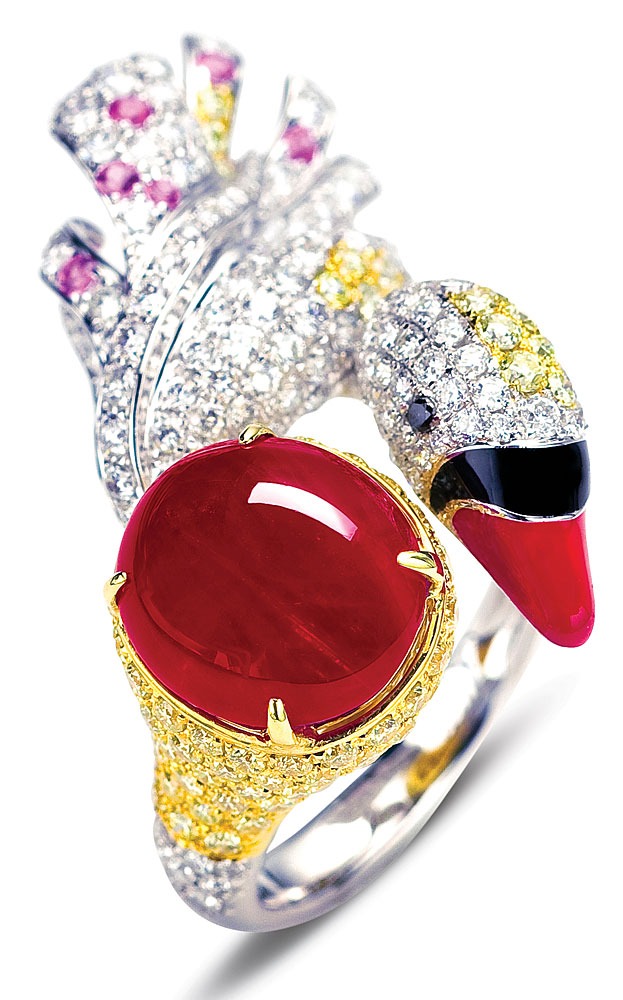 “Jewelry should be like a melody,” says classical-cellist-turned-designer Anna Hu. “It should move gracefully with curvatures, dangling drops, and a beautiful finish.”

That the 32-year-old’s two passions should inform one another is natural; yet Hu never deliberately chose to transfer her talents from string and bow to stone and precious metal. Rather, the career change came about by an unfortunate stroke of fate.

Born in Taiwan, Hu was a child prodigy who received national awards for her cello performances. At the age of 14 she moved to Boston to study at the prestigious Walnut Hill boarding school and, later, at the New England Conservatory of Music. But just as she began her professional career in earnest, she was diagnosed with a chronic form of tendinitis that forced her to abandon her musical ambitions.

The artist in her prevailed, however; she applied to her new career as a designer of fine jewelry the mathematical precision, mastery of nuance, and instincts for balance and rhythm that she had developed as a musician. Within a decade, she earned master’s degrees in art history and arts administration, as well as a graduate degree in gemology. She also worked as a gem buyer at Van Cleef & Arpels and in jewelry production at Harry Winston. In the latter position, she worked closely with jeweler Maurice Galli, from whom she learned the techniques of traditional European craftsmanship that remain the benchmarks of haute joaillerie.

This focused, rigorous activity provided the perfect prelude to Hu’s solo debut: The Anna Hu Haute Joaillerie boutique, which opened its doors in December at New York’s Plaza Hotel Retail Collection (an appointment-only salon has also opened in Tainan, Taiwan), showcases her one-of-a-kind premier collection in a serene, museum-like environment. New York’s Metropolitan Museum of Art furnished her inspiration for the space. “My favorite room at the Met is the Egyptian gallery,” she says, “because the refined, minimalist design allows the art to pop out.” Shades of platinum gray and ruby red, stone floors, silk walls, and minimalist Swarovski chandeliers offset the colorful pieces that rival those of legendary jewelry houses like Harry Winston and Bulgari.

Hu’s sharp eye for quality gems is a legacy from her parents, prominent importers and exporters of high-end stones, who encouraged her to eschew the use of semiprecious stones in favor of rubies, sapphires, emeralds, and diamonds. Yet as impressive as these raw materials are, the essence of Hu’s artistic vision lies in her diverse designs. Rather than establish a signature style, Hu allows each piece to evolve in her imagination: She begins by sketching her ideas and selecting stones of the right color and shape with a design team, before presenting her final concept to the craftsmen in New York and Paris who help forge, cut, and set the finished item.

Her love of classical music has influenced her work, but few of Hu’s musical allusions are explicit. Still, a few pieces in her collection represent more direct interpretations of a composition, as in the case of the Swan ring—a tribute to “Le Cygne,” the thirteenth movement in French composer Camille Saint-Saëns’ Carnival of the Animals, written in 1886. “It was the hardest piece I have ever mastered on the cello,” she recalls. “But it is also my favorite piece of music.”

Hu’s latest collection of diamond rings also evokes her former vocation. The rings’ subtle curvatures echo those of the lute, while their pear-shaped diamonds suggest music notes. “Music,” she affirms, “is never far from my heart.”