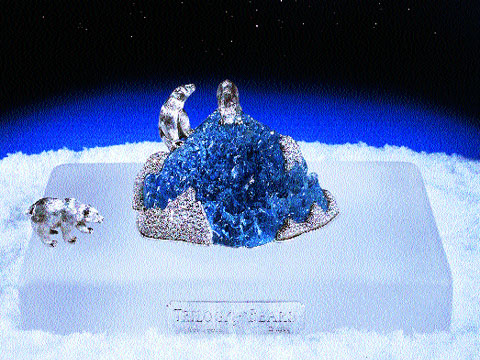 A few years ago, when jewelry designer Henry Dunay discovered a rough 2,400-carat aquamarine on one of his yearly gem-buying trips to Idar-Oberstein, Germany, he envisioned the North Pole. Rather than cutting the stone into smaller gems for his jewelry collection, Dunay spent three years carving and crafting the enormous aquamarine into three separate sculptures, accented with platinum and diamonds, which depict serrated, icy mountains, playful polar bears, and sparkling sea.

Dunay says he is increasingly inspired to shape precious minerals into one-of-a-kind art objects rather than break them up for jewelry. “I try to keep the stones in as natural a form as possible and build the design around the mineral using metal and gems,” he explains. While his jewelry is still the mainstay of his art, Dunay adds, “This is a time in my life when I want to express my artistic point of view without any limits.”

Dunay joins an exclusive group of jewelers and stonecutters who are known throughout the world for their unique objets d’art made from precious minerals and gems. “The rough stone tells us what it wants to be,” says Hans-Jürgen Henn, a fourth-generation stonecutter at Gebr. Henn in Idar-Oberstein, one of the premier gem-cutting centers of the world. “We look carefully at a stone’s inclusions and imperfections, and we follow its unique marks.”

In his constant search for high-quality, large gems, Henn will depart at a moment’s notice for remote gem mines to evaluate the latest discoveries. He often works with rock crystal and aquamarine from Pakistan, tourmaline from Afghanistan, and green beryl from the Ukraine. While he is best known for his menagerie of gemstone animals, one of his most notable masterpieces is a rare 10,000-carat aquamarine sphere, which sold for about $4 million to an American gem collector a few years ago.

Manuel Carrera, president and artistic director of the Spanish jeweler Carrera y Carrera, is among the artisans who accept unique special commissions. For Nicky Oppenheimer, the scion of the De Beers diamond business, he created a cricket match designed on a malachite base. Each figure was crafted in enamel and gold to resemble the actual players on Oppenheimer’s own cricket team.

Unlike artists who work in traditional media, these designers must rely on the availability of exceptionally large gems to create their masterpieces. And, they never know what discoveries are waiting to be unearthed. For instance, a stone dealer recently approached Dunay with four rough Burmese rubies weighing a total of about 700 carats. “These stones have a Buddhist feeling,” he says. “The colors and inclusions signal peace and serenity.” Dunay’s vision of a ruby mountain with a small Buddhist shrine is already in the works.