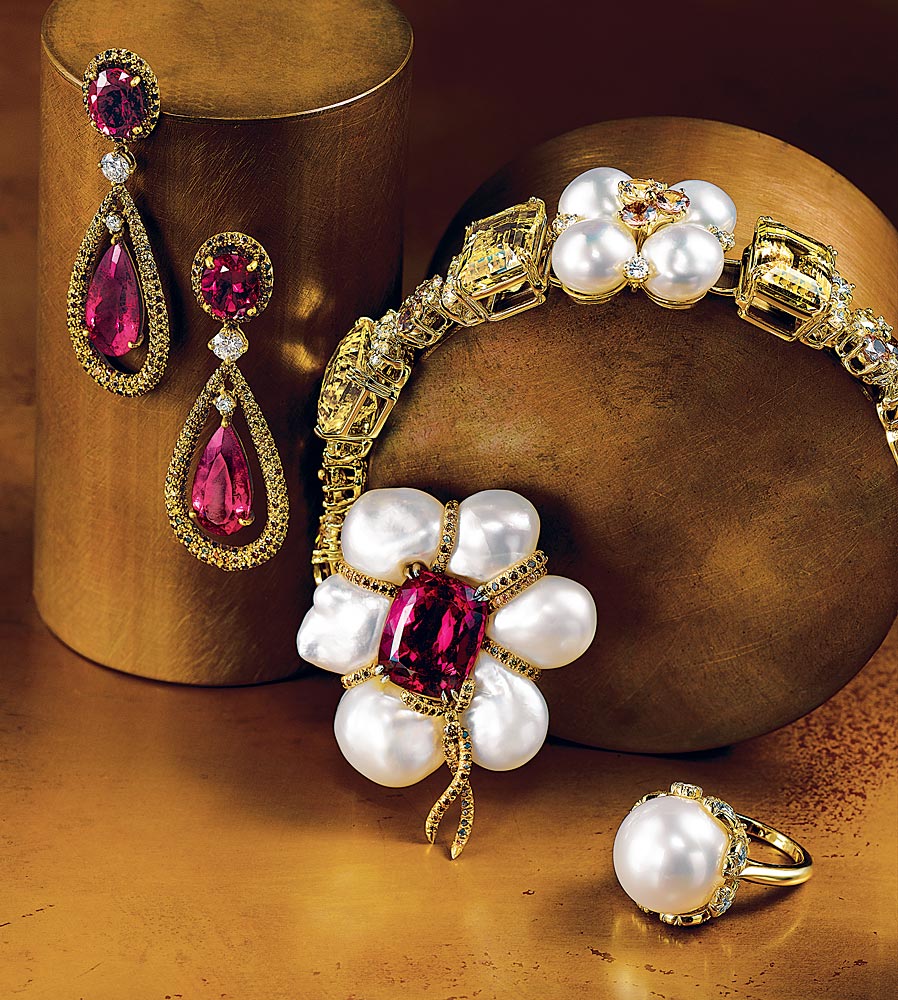 Last December, at Sotheby’s Magnificent Jewels sale in New York, the auctioneer’s gavel came down on an astonishing bid of $82,000 for a pair of earrings made of baroque keshi pearls and diamonds, whose estimated value had been $18,000 to $22,000. Nothing about the relatively classic earrings, created by a little-known designer named Donna Vock, immediately suggested such a lofty sale price, but the difference was in the details. “These earrings were not earth-shattering in terms of design,” admits Vock, whose jewelry Sotheby’s has featured in several of its auctions over the past few years. “What makes them special are the color, shape, and quality of the pearls, and the way the design is assembled.”

Vock’s subtle eye for the interplay of related elements—a skill she employs when selecting pearls and gems for her pieces—is not unlike that of an interior designer. “A great decorator can pick from 100 shades of white paint or fabric to find the best variation to pull a room together,” she explains. Just as a decorator shuffles fabric swatches and experiments with various levels of ambient light, Vock meticulously chooses each gem, laying out assorted pearls and stones on a table to scrutinize their colors, textures, and lusters. She observes them over the course of several days in natural, artificial, and evening light before arriving at the final combination.

Vock has honed her design skills for more than two decades, first as a diamond buyer for Tiffany & Co. and jewelry wholesalers, and later as an independent designer for such prominent retailers as Neiman Marcus. Two years ago she introduced her eponymous collection, whose designs highlight rare and exceptional pearls supplied by her husband, Alex Vock.Alex is the proprietor of ProVockative Gems, a premier dealer in the South Sea treasures.

“I love working with pearls, because they serve as a neutral platform with any colored gems,” Vock says. Her favorite pearls are the South Sea keshi varieties, which she admires for their deep luster and unusual shapes. “They are similar to baroque pearls, but softer and without the deep crevices that are typical of a baroque,” she says.

Vock pairs keshi pearls with uncommon combinations of colored gems, such as deep rubellites and brown diamonds or soft green beryls and aquamarines. With all of her pieces, she closely monitors production, making daily visits to the few New York City ateliers charged with translating her concepts into reality. (Her designs start at about $4,000 and can exceed $500,000.) But not all of the concepts begin with the component gems. Clients often commission Vock to revitalize their classic heirlooms.

For one recent client, Vock restrung a white South Sea strand with pieces of raw blue coral. “The contrast of the smooth, white pearls with the bright, textured coral made something classical very versatile and chic,” notes Vock. “Pearls are not just predictable, classic jewelry that your grandmother wore; they can be distinguished, individualized, and unpredictable.”