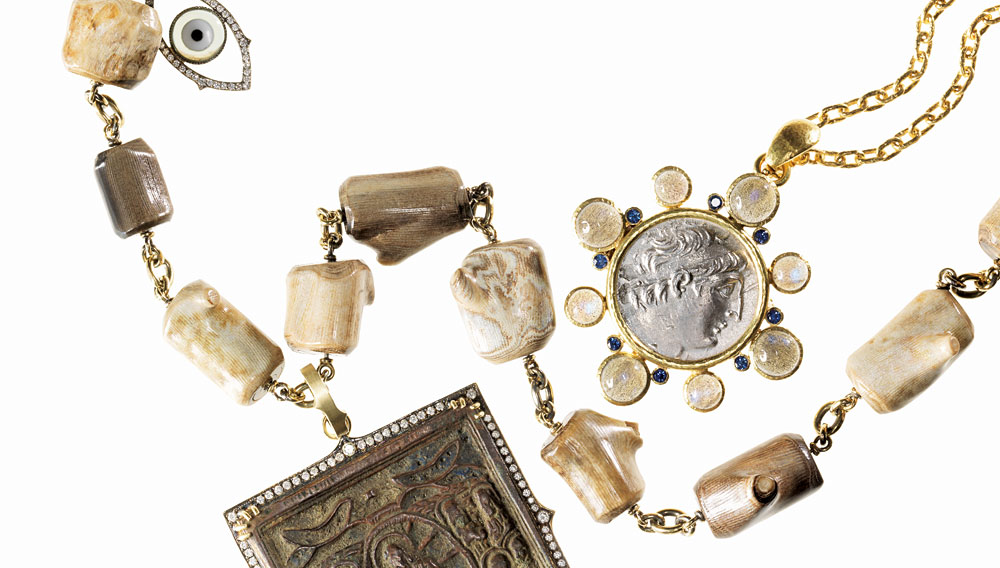 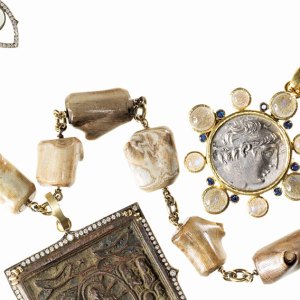 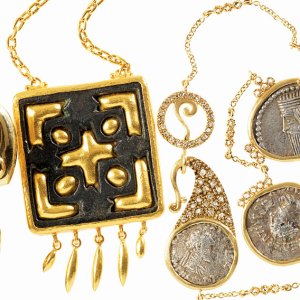 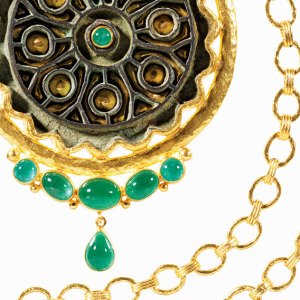 While hunting for antiques, Sylva Yepremian, the jewelry designer behind Sylva & Cie, stumbled on a cache of 19th-century bronze Russian icons. The small treasures, each of which depicts a finely sculpted biblical scene intended to serve as a protective talisman for travelers, captivated her. Yepremian bought the roughly 20 pieces, framed them with tiny diamonds, and set them on a series of graceful necklaces, including one fashioned with chunks of Jur­assic coral. “There is something very compelling about the images,” she says. “They don’t require much altering. I wanted the wearer to enjoy it as an original relic.”

Like archaeologists digging for ancient ruins, Yepremian and other jewelry designers are scouring the globe for antiques and artifacts to incorporate into their collections. Miniature antiquities, such as pieces of Roman bronze dating to 100 AD or Greek coins from 350 BC, are being transformed into modern-day ornaments with contemporary settings and luxurious gemstone embellishments that lend the pieces an up-to-the-minute edge.

“The pieces I use are the survivors of man’s early cultural history,” says Coomi Bhasin, the New Jersey proprietor of Coomi. The designer is influenced by her Indian heritage, and instead of a high shine, Bhasin’s 20-karat-gold designs have patinas that suggest family heirlooms. Her newest collection features Indo-Greek, Parthian, and Roman coins set in Indian-inspired gold paisley patterns with rose-cut diamonds. Last spring she created a series of one-of-a-kind pendants using ancient glass vessels. Bhasin is fascinated by the antiquities’ beauty and sense of mystery. “When I hold an antique piece in my hand,” she says, “it connects to something within me.”

The New York City jewelry designer Alberto Petochi, who recently launched the 1884 Collection, has also delved into his personal history for his pieces. Inspired by his grandfather’s collection of ancient Roman coins, Petochi sets re-creations of Roman coins, as well as a limited number of ancient coins, in 18-karat-gold settings with gemstone accents or on colorful sapphire-bead necklaces. The pieces are made at workshops in his hometown of Rome.

Another jeweler, Gurhan Orhan, divides his time between Istanbul and New York, and he integrates collectibles into designs that exude a Turkish sense of style. He characterizes placing ancient Roman bronze pieces in hand-hammered, 24-karat settings as “reincarnating” them and giving people a chance to enjoy them in a new way.

Elizabeth Locke, a jeweler based in Northern Virginia, also embellishes her designs with ancient coins (from Greece, Rome, and the Byzantine Empire), as well as other collectibles, such as 18th-century mother-of-pearl gambling counters and intaglios made from Italian Renaissance molds. The hunt for precious objects has taken Locke around the world, a quest that has been frustrating at times: For the past 15 years, she has searched for 13th-century Indian coins with no success. But when she does uncover great treasures, “they become small, wearable works of art,” she says, “not to mention excellent conversation pieces.”