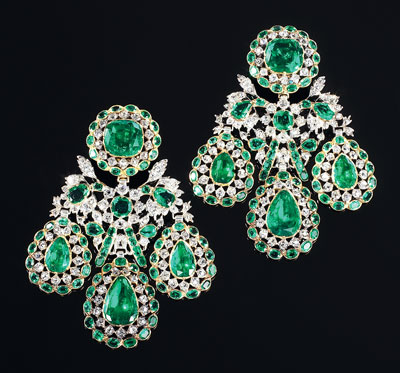 The tiny Stephen Russell boutique on New York’s Upper East Side is a destination for those seeking extremely rare period jewelry, though its treasures are anything but antiquated. “This doesn’t look like old-lady jewelry,” asserts co-owner Russell Zelenetz, as his partner Stephen Feuerman unveils a recently acquired 1912 Boucheron choker with diamonds that cascade down the décolletage. “This necklace drapes like a piece of fabric, and it’s tailored and light,” says Feuerman of the $650,000 design.

The Edwardian-era necklace shares a display case with a pair of circa-1780s Iberian emerald chandelier earrings, a streamlined 1930s Cartier Art Deco aquamarine and diamond bracelet, and a pair of recently completed earrings featuring natural blue, pear-shaped sapphires totaling 53 carats. When Feuerman saw the twin stones, he realized he likely would never find a comparable pair, so he purchased them on the spot and later combined them with old-mine-cut diamonds to fashion the $480,000 earrings. It is not by chance that Stephen Russell’s modern designs blend so well with the shop’s vintage treasures. Although the pieces may be from different eras, they all reflect the partners’ tastes. Indeed, Zelenetz and Feuerman have passed on purchasing valuable vintage pieces with strong provenances because they did not care for the style.

They also have purchased entire lots of mostly lackluster pieces just to attain one prize that captured their fancy. Recently, a woman who visited the store offered to sell them her collection of about a dozen pieces, but only as a whole. The partners were enamored with a rare 1950s Cartier gold, ruby, and diamond bracelet that was part of the cache, so they bought the lot and then resold those items that did not meet their finicky standards.

Despite such fussiness, when it comes to acquisitions, both men are warm and gracious toward their clients. More likely to greet their customers wearing open shirt collars instead of slick suits, these forty-something family men (each is married with two children) met while in their 20s and have been in business together ever since.

The partners never tire of retelling their favorite buying anecdotes, such as the story about the time a few years ago when Feuerman was stranded, because of bad weather, in Dallas. After finding the addresses of local jewelers in the phone book, he paid visits to several of them. At one of these establishments, amid an abundance of what he refers to as “crap,” Feuerman found a rare 1930s Patek Philippe timepiece. Another tale involves a trip to Mexico City for a friend’s wedding, where he met a woman who sold him a highly prized Art Deco Egyptian Revival pendant necklace. “We find things in the weirdest places,” Feuerman says. “The best pieces usually come from private individuals who’ve had their jewels hidden in a safe for years.”

Zelenetz and Feuerman say that, because of a surge in vintage jewelry’s popularity, in recent years it has become much more difficult to find outstanding pieces. Describing what he calls his “incurable sickness” for acquisitions, Zelenetz remarks that when he does manage to land truly special jewels, it can be difficult for him to let them go. “I like to preen over them for a while and share them with our clients,” he says. “Sometimes I feel deflated when a fabulous piece sells quickly.”