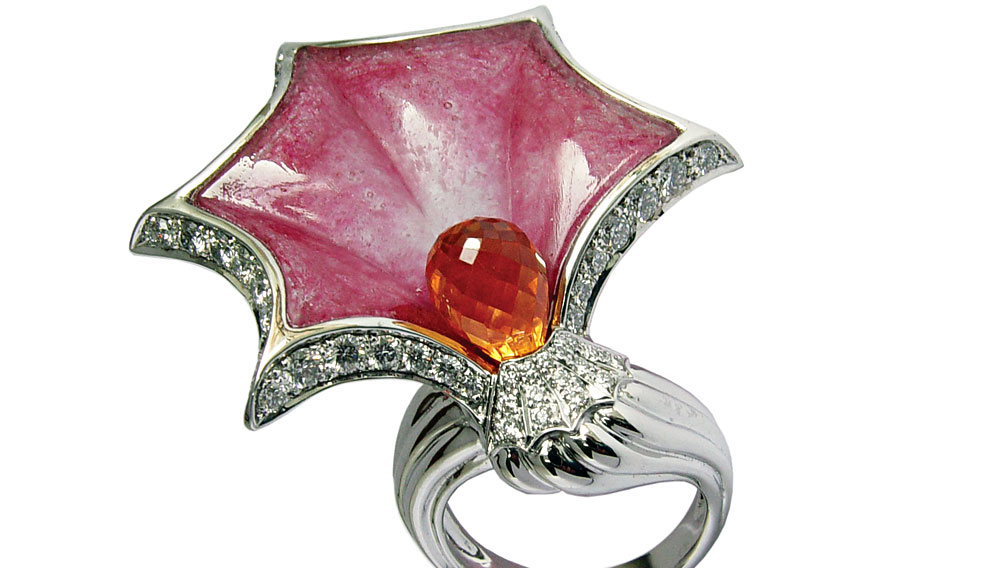 At the turn of the 20th century, Joseph Marchak was known as the Cartier of Kiev, a talented jeweler and craftsman of gold and silver objets d’art with a following that included the elite of Russia.

He opened his first workroom in 1878, when he was just 24, and continued to create finely wrought gold and silver candelabra, cigarette cases, and statuettes, and splendid gold-and-diamond mesh bracelets and necklaces until his death in 1918. The following year, the Russian Revolution drove his family to Paris, where his son Alexandre established the Marchak jewelry house on the rue de la Paix. The younger Marchak flourished for decades with his own colorful designs, but eventually the business closed in 1987.

Now Marchak is in the midst of a comeback, with a series of international exhibitions, a fresh Parisian salon, and new designs that capture the founder’s playful spirit. Joseph Marchak’s great-grandson, Parisian plastic surgeon Daniel Marchac, revived the name, and a fanciful by-appointment Parisian boutique opened in 2005, allowing clients to see the jewelry along with original illustrations of early designs, images, and documents tracing the designer’s heritage. The collection has since become noteworthy for artistic, colorful gemstone pieces, and was shown at Dorfman jewelers in Boston earlier this year.

The new house of Marchak is being led by Dominique de Blanchard, who also has a deep connection to the brand: She owns a small, prestigious Parisian jewelry workshop established in 1830 that once made Marchak jewelry designs. In addition, de Blanchard has the guidance of Bertrand Degommier, a key designer for Marchak since 1958, who is bringing the house’s signature Russian soul and craftsmanship to new designs.

“When you sell high jewelry it is about more than the sum of its parts—gold and stones,” says de Blanchard. “We are selling dreams, stories, romance.” The new pieces include a playful series of animal brooches made of mink with diamond accents. Another series features pâte de verre, an old technique in which a paste of glass is fired to create a painterly look with a high-gloss finish. One brooch features a gold frog decorated with pavé diamonds perched on three large blue pâte de verre lily pads. Prices start at about $4,500 for a floral pâte de verre ring and go up to several hundred thousand dollars for elaborate pieces. Marchak also creates custom designs. “People want more individualized design today,” de Blanchard says, “and we are going back to a more personalized way in jewelry.”