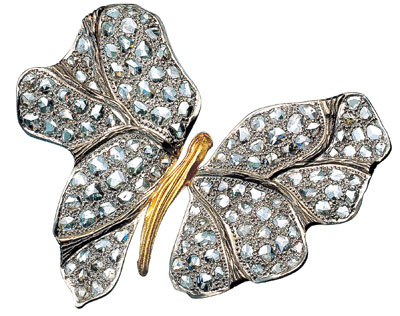 Even a piece as voluptuous as the diamond-covered butterfly brooch that Lina Fanourakis recently sculpted manages to exhibit the understated character that defines her work. The gold from which Fanourakis formed the brooch is a muted gray, and the rose-cut diamonds radiate a soft glow instead of the intense sparkle that modern multifaceted stones project. “Lina’s diamond designs are luxurious and subtle at the same time,” says Patricia Faber, co-owner of New York’s Aaron Faber Gallery, which has been carrying Fanourakis’ collection since 2000.

“I prefer treating metal and diamonds in an unassuming way,” explains Fanourakis, who last October opened a boutique in Paris, her first store outside of her Greek homeland, where she has four shops and a manufacturing atelier. A petite woman in her early 60s with mesmerizing dark eyes, Fanourakis has been cultivating her distinctive style for 35 years. She established a jewelry studio in Athens in 1971, which she closed after marrying Leonidas Fanourakis, whose family had been in the jewelry business since 1860. She soon took a position in his company, Fanourakis, and eventually became its principal designer. Lina quickly overhauled the jeweler’s collection by replacing its traditional ethnic designs with modern shapes and forms, such as her rose-cut diamond pavé Chinese Hat ring, formed in a convex shape that curves around the knuckle.

Before entering the jewelry realm, Fanourakis was a sculptor and a costume designer. This background resurfaces in her ability to drape sheets of gold as though they were swaths of silk. Her Scarlett O’Hara cuff, for example, depicts a golden corset laced with a diamond-encrusted ribbon.

Fanourakis’ latest creations are botanically correct poppy and anemone flowers with petals made of various shades of gold—from rose to gray—and 22-karat gold pistils. Rather than applying a more common glossy enamel finish, she painted some of the blossoms to achieve a subdued matte effect. This treatment is consistent with the subtle nature of her jewelry designs, which, she says, are influenced by her perception of the Greek temperament. “The Greeks express themselves in an understated manner,” says Fanourakis, “and my jewelry reflects our culture in that sense.”