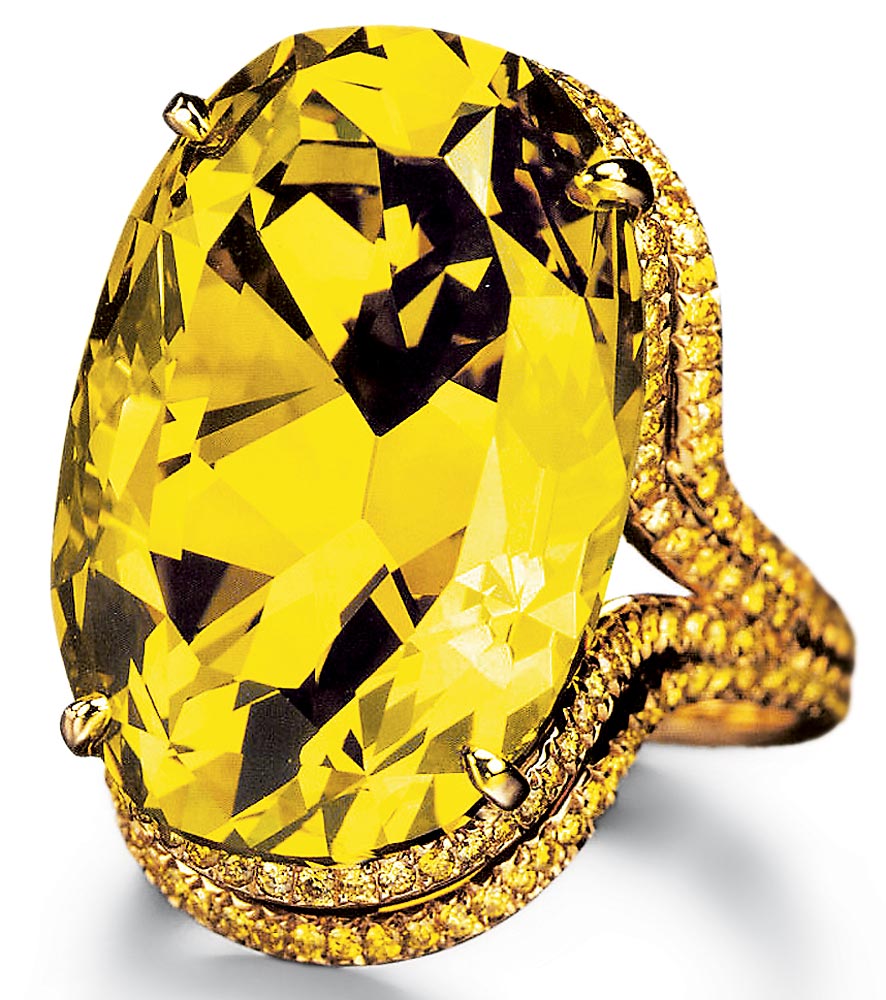 In the late 1950s, an expert at the Gemological Institute of America (GIA)—the world’s leading nonprofit institute devoted to gemological research and education—graded an unusual green diamond. After conducting a thorough examination of the stone, he carefully placed it in the laboratory’s safe and left for the day. When his colleague arrived at the laboratory the following morning to make his own assessment of the treasure, he discovered that the green diamond was gone and that someone had deposited a yellow specimen in its place.

A frenzied search ensued as the technician scoured the lab in search of the missing gem. Some time later, his panicked hunt came to a startling end when, upon returning, he found the green diamond precisely where he had left the yellow one. That was when it occurred to him that the two stones might be one and the same. Scrupulous inspection of the gem in varying levels of light revealed that his hunch was correct: He had in his possession an entirely new category of diamond.

Since that day, the mysterious chameleon diamond has astounded and bewitched even the world’s most eminent gemologists with its shifts in color, from green in bright light to yellow in darkness or at high temperatures. Named for the lizard that changes its hue to camouflage itself, the chameleon diamond is extremely rare, and typically it is found in small sizes of two carats or less, according to Tom Moses, senior vice president of laboratory and research at the GIA. These facts about the astonishing stones make even more incredible Chopard’s recent unveiling of a nearly flawless, 31.31-carat, strawberry-size chameleon diamond—the largest known specimen of its kind. “I was flabbergasted when I laid eyes on the stone,” says Caroline Gruosi-Scheufele, copresident and design director of Chopard, which has not divulged the circumstances surrounding the diamond’s acquisition.

Exactly how the diamond changes color is equally perplexing: Although experts have linked the phenomenon to the stone’s high concentrations of hydrogen, nitrogen, and nickel, the process has not yet been fully explained. While the stone’s chemistry remains unclear, the design possibilities inherent in the gem’s changeable color were immediately apparent to Gruosi-Scheufele, who set the $10 million diamond in a simple ring surrounded by tiny yellow diamonds.

Few among the curious will have the opportunity to view this wonder firsthand. It is not showcased in one of Chopard’s international boutiques; Gruosi-Scheufele privately presents the piece to VIP clients who have a deep appreciation of rare stones. “It is for the connoisseur who already owns other important jewels,” observes the GIA’s Moses. He likens the purchase of a chameleon to buying a peculiar classic car: “A car collector most likely buys his Ferrari or Aston Martin first, but he also wants to acquire a less recognized but striking collectible, such as the Duesenberg, to round out his collection.”

The $10 million chameleon is part of Chopard’s burgeoning high-jewelry collection, which over the past few years has come to represent the house’s prowess in acquiring collectible gems and executing complicated designs. Other captivating jewels in the collection include a pair of 19-?carat, intense-pink, pear-shaped diamond drop earrings and a 9.33-carat, deep-blue, oval-cut diamond set in a ring of rose gold and pink-diamond pavé.

However, these mere colored diamonds, though extraordinary, can never match the private pleasure that a chameleon provides its wearer. “The mystery of the color change isn’t immediately evident to an observer,” says Moses. “The owner carries a secret that she can reveal only if she wants.” But once you witness the color change firsthand, he says, “you can’t believe your eyes, and you want to see it again.