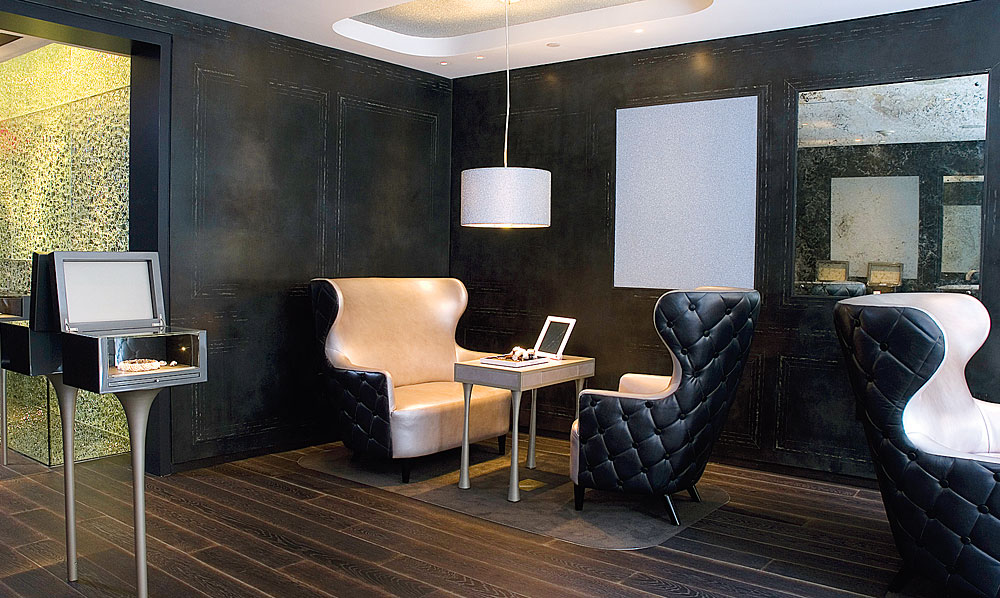 A dark, cavernous main floor; a stark white salon festooned with ostrich feathers; illuminated cracked-glass walls; and kaleidoscopic light shows emanating from the windows at night are not features one associates with the typically more staid jewelry houses on New York’s Madison Avenue—particularly one as venerable as Parisian jeweler Mauboussin. But the 181-year-old company’s eye-catching five-story boutique, which opened in November, represents only the most recent phase of a broader strategy on the part of entrepreneur Dominique Fremont to reinvent the once-sleepy brand. After acquiring the Mauboussin family’s interest in the business in 2002, Fremont took the first and most important step in that reinvention when he persuaded fashion-industry veteran Alain Nemarq to take over as president.

From the beginning, Nemarq wanted to give the company a livelier, more modern sensibility. As a newcomer to jewelry, he approached his task with a completely fresh perspective. For instance, when he discovered a cache of 3,000 dark-blue sapphires, he swiftly purchased the lot with a new design theme in mind. “Nobody wanted the stones because they were almost midnight-black,” he says, “but that’s what I liked about them.” Unlike most jewelers, who envision their pieces as timeless heirlooms, Nemarq unapologetically regards each of Mauboussin’s designs as a changing fashion accessory—whether the item in question is a bold, colorful cocktail ring priced at $650 or a sculptural pendant necklace priced at more than $50,000. “Jewelry is of the moment,” he says. “Women feel different emotions at different times, and that is why they should change their jewels often.”

The expansive new store reflects this more modish attitude toward jewelry. Collaborating with David Rockwell of the Rockwell Group, Nemarq sought to realize an “emotional, evocative, and playful ambience” in which to display Mauboussin’s more fashion-forward collections. “The boutique was designed to create the sense of rising from the earth into the sky,” he says. On the ground floor, shadowy decor provides a cool contrast to arrangements of brilliantly colored jewelry. On the second level, against a lighter, more neutral decorative palette, diamond pieces are showcased individually in innovative display cases on pedestals. The third-floor bridal salon is brighter still: Here, tufts of white tulle drift down from the ceiling to accent the striking pure-white design.

Nemarq’s concept, however, encompasses more than retail space. The boutique also serves as a destination for clients, who can immerse themselves in still other types of sensory indulgence. On the fourth floor, for instance, Salon de Gourmandise offers an imaginative array of French pastries and chocolates from Thomas Keller’s Bouchon Bakery, while in the fifth-floor private dining room, visiting Parisian chefs, such as Yannick Alléno of Le Meurice, work their culinary wonders, preparing special themed dinners on a monthly basis. Fine art also figures prominently in the Mauboussin experience: Works by contemporary artist Clara Halter, painter and sculptor Marine Delterme, and painter Aki Kuroda complement the masterfully modern jewels displayed throughout the store.