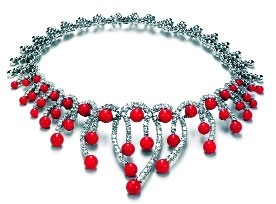 Each summer, the Mediterranean island playground of Capri attracts scores of global jet-setters who touch down to explore picturesque beaches, pristine grottoes, and a dynamic social scene. Another integral part of the island’s landscape is Chantecler, the legendary local jeweler that has catered to Capri’s chic seasonal inhabitants since the 1940s.

“Some clients arrive on their yachts or jets and come directly to our atelier to see the new jewels and have a glass of Champagne with us,” says Costanza Aprea, the designer who has taken over for her late father and his partner, the salon’s founders. Clients have been known to spend hours at the jewelry shop mulling over new sketches and perusing Chantecler’s latest gemstones and pearl discoveries. But there is no immediate gratification when you are seeking one-of-a-kind jewelry designs that start at around $200,000—be prepared to wait at least six months. “Each design is like a work of art,” explains the petite designer with a deep bronze Mediterranean tan. “If we need another month to make a creation just right, our clients understand.”

Chantecler’s elaborate jewelry is inspired by the island’s exotic natural environment. The Hornet necklace, for example, features two natural pearl and diamond insects that appear to hover over a bed of pastel-colored natural pearls. Another necklace combines rare angel coral beads with diamonds, in a design that resembles streams of sea bubbles.

Capri’s captivating beauty attracted jeweler Pietro Capuano in the 1930s. The eccentric Neapolitan native quickly gained notoriety as much for his colorful jewelry as for his flamboyant personality. Capuano’s friends affectionately nicknamed him Chantecler, the French word for rooster, since he was known to walk around the island dressed in red as a personal political statement against Fascism. In 1947, he opened the Chantecler store with Salvatore Aprea, a young man from Capri who shared his love of art and gemstones. Throughout the ’50s and ’60s, high-profile patrons such as Jacqueline Kennedy Onassis, Grace Kelly, Maria Callas, and Charlie Chaplin were among the jeweler’s loyal clients.

After Capuano’s death in 1982, Aprea and his three children continued the Chantecler tradition with its fantasylike, one-of-a-kind designs using colorful and exotic gemstones as well as simpler, everyday designs.

Chantecler, which also has a boutique in Cortina, Italy, still attracts aristocrats, socialites, and celebrities, but the Apreas refuse to divulge their current clients. “Over the years, many of our customers have become our friends,” explains Aprea. “We don’t want to betray their privacy.” In keeping with its exclusive approach, Chantecler also holds private showings each year in Milan, New York, and Palm Beach.

With the summer season in full swing, Aprea is busy planning dinner parties and social events for clients and friends. “In the summer months, our store in the main square is a popular meeting place,” she says. “And, there is always enough jewelry and cold Champagne for everyone.”