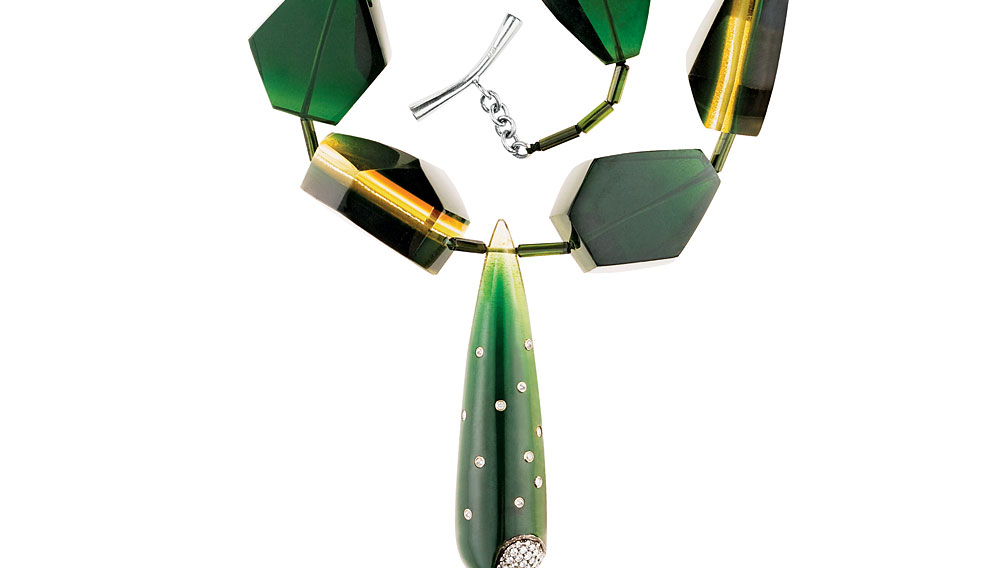 Janis Provisor’s foray into jewelry design was not an orchestrated career move but a creative accident. The renowned artist—whose paintings have graced the walls of such institutions as the National Gallery of Art in Washington, D.C., and the Whitney Museum of American Art in New York—discovered her passion for creating jewelry around the time that she and her artist husband, Brad Davis, established Fort Street Studio in Hong Kong. (The company also has locations in Los Angeles and New York.) When Provisor was not designing silk carpets based on watercolor paintings for Fort Street (prices for the rugs start at $20,000), she spent her time exploring Hong Kong. Her excursions led to the discovery of unusual pearls and beads from which, on a whim, she assembled some necklaces. “I put together elements for their color, shape, texture, and sense of whimsy,” she says, noting that, because she has no formal training in jewelry design, she feels free to pursue her own concept of wearable art. Her lack of professional credentials did not deter admirers: To Provisor’s surprise, her homespun bijous attracted the attention of friends and art collectors, who made offers to buy the pieces right off her neck.

One of these devotees was American collector Debi Wisch, who also happened to be living in Hong Kong at the time. Although Wisch initially sought out Provisor’s carpets, the jewelry captivated her, so she convinced the artist to transform her hobby into something more serious. The women partnered and relocated back to New York, and Wisch hosted a reception for Provisor in her Fifth Avenue apartment. She invited friends to preview 30 newly minted pieces, which sold out immediately. “Women,” says Wisch, “are very excited about buying one-of-a-kind necklaces with no labels or common thread other than an aesthetic that can best be described as high-end Bohemian or classic with a big kick.”

After selling privately for a few years, the partners decided to develop a more cohesive collection (priced from $2,000 to $30,000), which debuted at Bergdorf Goodman earlier this year. The expanded line includes gold elements forged by a single craftswoman whom Provisor discovered while traveling through Bali. This skilled artisan, working from detailed sketches, hand-sculpts each element from 22-karat gold. Provisor then strings these elements onto fishing wire with other pieces—stones, gems, or beads—and ships the various components to a master knotter in Hong Kong, who assembles the jewelry.

The fine workmanship notwithstanding, it is Provisor’s vision that defines this personal collection. With childlike curiosity, she continues to seek components during her travels, making stops at local Asian markets, gem shows, pearl farms in Southeast Asia, and the countryside of New York’s Hudson Valley. Recently she acquired a small cache of cherry quartz that she transformed into a constellation-like cluster by encrusting the stones with bright-blue topaz and diamonds. The design illustrates Provisor’s irreverent style, which combines precious materials such as diamonds with ordinary stones and, in some cases, even seeds from trees.

Provisor’s most recent discoveries include Kenyan golden amber beads, glossy black-and-white Italian marbles, high-quality amethysts, tourmalines, and citrines. “I use components for their originality,” she says, “and I like to mix the high and low—the most precious with the commonplace. But each element brings value to a design.”