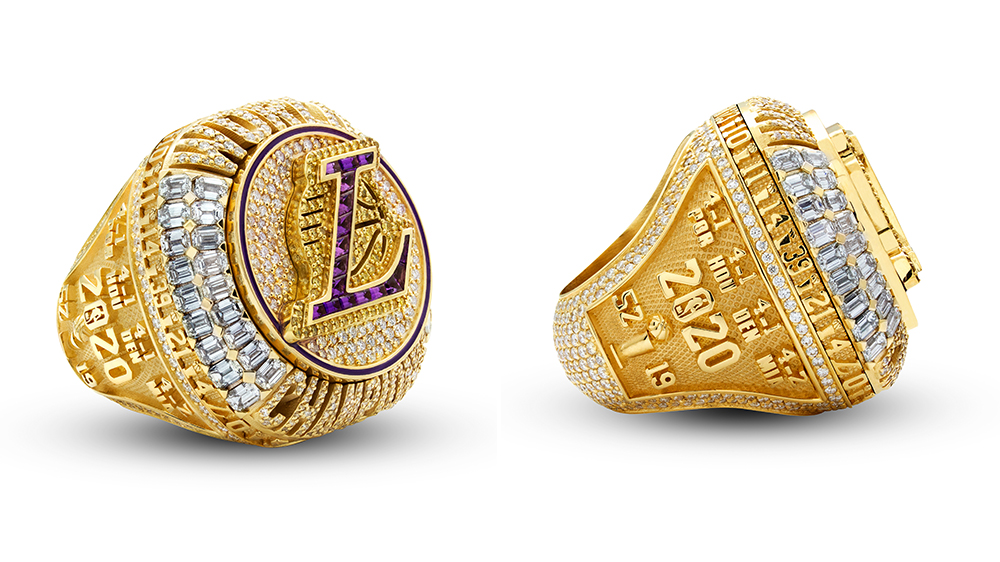 Less than three months after LeBron James, Anthony Davis and the rest of the Los Angeles Lakers vanquished the Miami Heat to win the 2019-20 NBA championship, professional basketball has returned. On Wednesday night, the Lakers christened their title defense by handing-out their newest championship rings before the season’s home opener.

In a normal year, Jason of Beverly Hills, the jeweler charged with designing the Lakers’ ring, would have had three to four months to create and deliver the glitzy bauble. But 2020, of course, has been no normal year. Because of the compressed offseason, Arasheben and his team—including famed streetwear designer Don C—had to produce the ring in a month so that it could be presented to the Lakers players before tonight’s game against cross-town rivals, the Clippers.

“We had to finish all these rings in record breaking time because we really only had four to five weeks to finish everything,” Arasheben told Robb Report earlier this week. “This is completely unheard of, and usually I would say impossible. But we had people staying overnight and working late and we were able to get it done.”

Fortunately, the jeweler knows a thing or two about crafting championship rings, having made them for some of the world’s greatest sports teams, including six NBA title winners (three of which were Lakers teams). Despite the short development time, the jeweler and his team were able to produce one of its most spectacular pieces yet. This year’s ring has a stunning 804 stones, which works out to 15.50 carats of white and yellow diamonds and another .95 carats of Laker Purple amethyst stones.

To be sure, this ring had a unique story to tell. The year’s narratives include a global pandemic, playing in a bubble in Orlando, Lebron James’s first championship as a Laker, Anthony Davis’s first of his NBA career and, of course, the tragic death of one of the franchise’s most beloved figures, Kobe Bryant. As if that weren’t enough, the title was the franchise’s 17th, tied for most in NBA history in the arch-rival Boston Celtics. On top of that, the team wanted to acknowledge all the Laker greats that have donned the purple and gold.

Somehow, the ring nods to all these things. There are 17 amethyst stones in the L, one for each Lakers championship, while the 0.95 carats of amethyst represent the 95 days the team spent in the bubble and the 52 carats of yellow diamonds represent each of its 52 regular season wins. The ring is surrounded by the jersey number of every player who suited up for the team last season, which are separated by 17 small Larry O’Brien trophies. One side of each ring features the team’s regular season and playoffs series records, while the other shows the player’s name and jersey number in front of a black mamba snake. But the biggest tribute to Bryant and other Lakers legends is visible when you remove the top of the ring to reveal every single one of the franchise’s retired jersey numbers over a black mamba pattern.

Arasheben said the Lakers’s 2019-20 championship ring is the most expensive in NBA history when you take into account grams of gold and carats of diamond, though he demurred when asked to put a dollar amount on each ring. “That’s the question I always get asked and I wish there was a simple answer to that,” he told us. “I don’t have a number because these rings are really priceless.”

We can think of at least 15 Lakers who would agree.