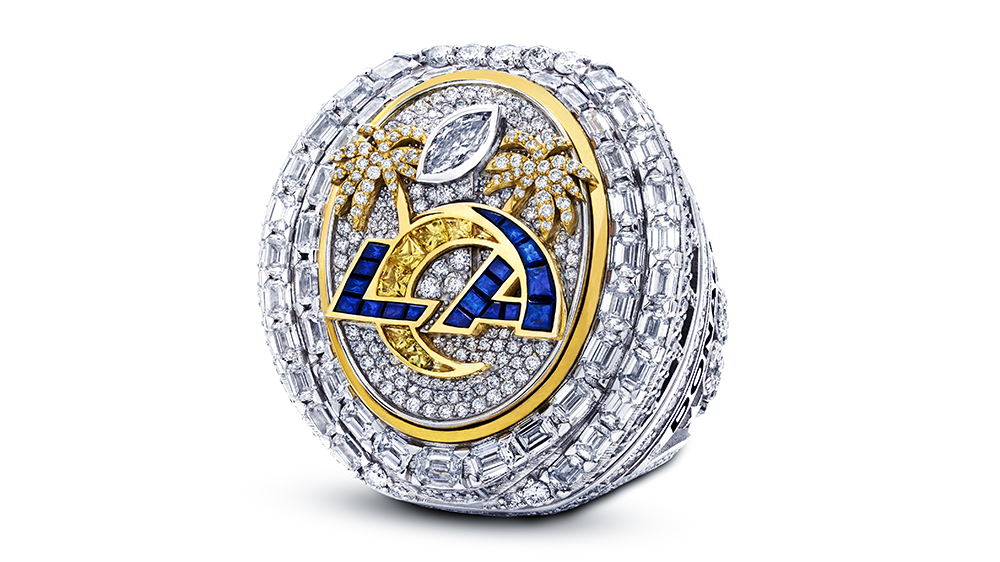 The Los Angeles Rams have made sure their first Super Bowl ring in more than two decades is one to remember.

The NFL champs shared the first images of their ring late Thursday night, hours after it was presented to players, coaches and staff in a private ceremony. While any celebratory bauble is special, the Rams’ new ring boasts the distinction of having the highest carat weight in championship ring history.

The ring, which the Rams earned after beating the Cincinnati Bengals 23-20 in Super Bowl LVI, was designed by the team and noted jeweler Jason of Beverly Hills. Overall, it has approximately 20 carats of white diamonds set in white and yellow gold, according to a spec sheet shared with Robb Report. The carat count is meant to celebrate the opening of the Rams’ home, SoFi Stadium, in 2020. There are also 1.12 carats of round diamonds meant to signify January 12, an important date in the team’s recent history. On January 12, 2016, the franchise’s move back to Los Angeles from St. Louis was approved; on January 12, 2017, head coach Sean McVay was hired, and, on January 12, 2019, the team won its first playoff game since returning to LA.

Our favorite Easter egg is the removable top, which is adorned with the team’s logo, the Lombardi trophy and two palm trees. Remove it and you’ll find a miniature replica of the team’s home stadium with a field made from SoFi’s actual turf. The underside of the top is designed to look like the stadium’s translucent canopy roof and is surrounded by a piece of a Super Bowl LVI game ball. Each ring also features each player’s name and number, the team’s “We Not Me” motto and the score from each of last season’s playoff games.

“Most people don’t understand how immersed we become in the design process. We are passionate about understanding the team, the season, and the city,” Jason Arasheben, CEO Jason of Beverly Hills, said in a statement. “We spent an entire day at SoFi Stadium. The first thing I said was, ‘What can you get me from the game? The field? Ball? What else?’ I didn’t just want it to be historical in design, but have physical elements from the event as well.”

It makes sense that the Rams would call on Jason of Beverly Hills to help design the second Super Bowl ring in the franchise’s history. Not only is the jeweler local, but he’s also designed 12 championship rings across four sports since 2009. If Los Angeles’s most successful team, the Lakers, trust him, why shouldn’t the Rams?

Click here to see all the photos of the Los Angeles Rams’ Super Bowl LVI ring.