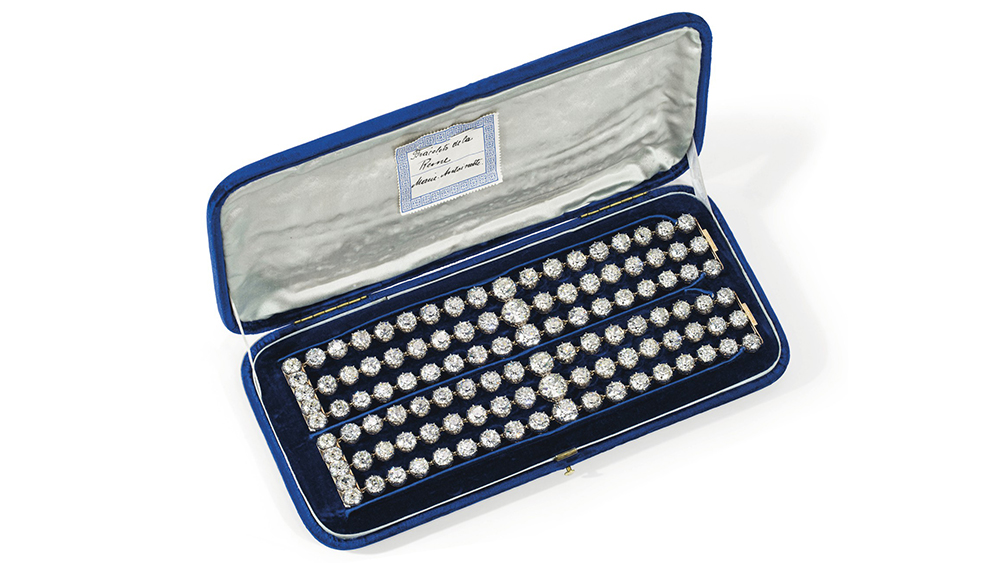 It’s not every day you get to bid on crown jewels. But you can do just that at Christie’s this fall.

On Wednesday, the British auction house announced that a pair of diamond bracelets owned by French Queen Marie Antoinette will be the first lot in its Magnificent Jewels sale, which will be held on Nov. 9 in Geneva’s Four Season’s Hotel Des Bergues. The bracelets feature 112 diamonds in total: Each piece is comprised of a clasp with five diamonds and three rows of 17 stones. The largest diamonds are arranged in the center, while the smaller ones are secured with a rim of metal in collet settings.

One of the diamond bracelets once owned by Queen Marie Antoinette.  Sotheby's

Marie Antoinette purchased the bracelets in the spring of 1776 for 250,000 livres (French for “pound”), an astronomical amount for the time. The queen was said to have an affinity for jewelry, especially diamonds. According to Austria’s ambassador to France, Count Mercy-Argenteau, she paid for the bracelets partly with gemstones from her own collection and partly with money she received from King Louis XVI. According to Christie’s, the jewelry historian Vincent Meylan recently found a line in the king’s papers from February 1777 corroborating this, which states “to the Queen: the down payment of 29,000 livres for the diamond bracelets she bought from Boehmer.”

In 1791, in the midst of the French Revolution, the queen sent a letter to Mercy-Argenteau explaining that she planned to send him a wooden chest for safekeeping. By that time, he was in Brussels, and he stored the chest until after Marie Antoinette was beheaded in 1793. The following year, her nephew Francis II, the Holy Roman Emperor, ordered for the chest to be opened so that an inventory could be taken. Among its items were the bracelets being sold this fall. They were given to Marie Antoinette’s last surviving daughter, Marie Thérèse—styled as Madame Royale—when she arrived in Austria in January 1796. In 1816, artist Antoine-Jean Gros immortalized Marie Thérèse in a portrait; in it, she’s wearing a pair of diamond bracelets that fit the description of Mercy-Argenteau’s inventory.

A portrait of Marie Thérèse of France by Antoine-Jean Gros.  Sotheby's

Marie Thérèse’s will, dated July 1, 1851, asked that the entirety of her jewelry collection—including her mother’s jewels—be divided among her three nieces and nephews. According to Christie’s, the diamond bracelets are the only family jewels to include diamonds that belonged to Marie Antoinette. The bracelets may have been remounted at a later time, but no changes were made to their overall composition and number of diamonds. This is with the exception of the diamonds on the clasp, which has remained identical the original design.

The bracelets are estimated to fetch somewhere between $2 million and $4 million but it wouldn’t be surprising to see them sell for far more. When Sotheby’s sold a pearl pendant that once belonged to the queen in 2018, it was estimated to sell for between $1 million and $2 million. It ultimately sold for a whopping $36.1 million.

Viewings of the scintillating jewels will be held at Christie’s in New York from Sept. 27 to 29, Hong Kong from Oct. 7 to 10, Shanghai and Beijing during the second half of October, and Geneva from Nov. 4 to 8.