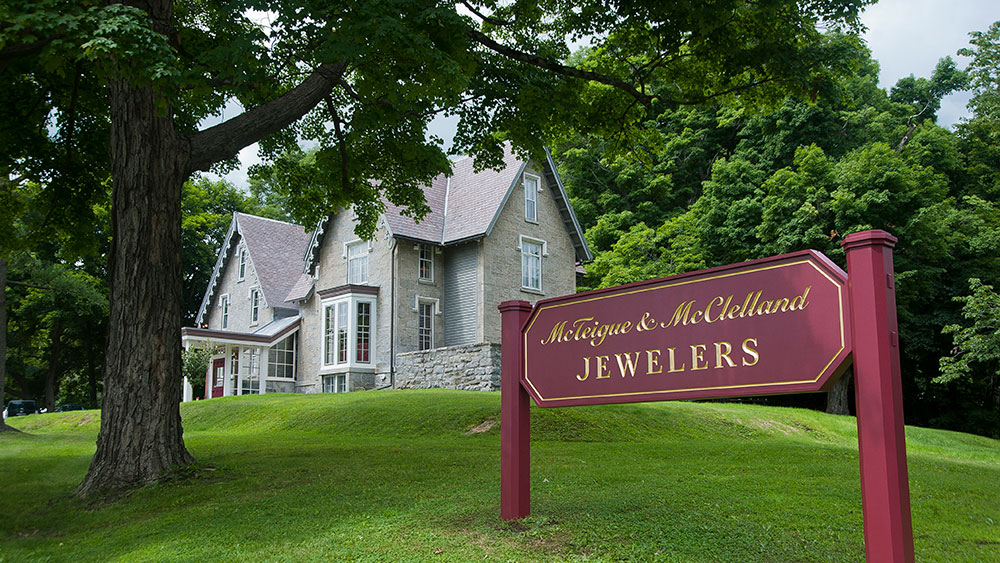 On Black Friday, McTeigue & McClelland, a fine jeweler with a showroom and workshop in Great Barrington, Mass., in the heart of the Berkshires, kicked off a blockbuster sale—only the second in the company’s 21-year history.

The business, founded in New York City in 1998, combines the gem-sourcing talents of Walter McTeigue, a fourth-generation diamond and colored stone dealer whose family once supplied Tiffany & Co., with the jewelry-making expertise of Tim McClelland, a classically trained metalsmith with a love of artsy, risk-taking design. The first time they held a sale was in 2014, when they were preparing to move to their current location, a Gothic Revival limestone building they purchased in 2013 for $2 million, and needed a cash infusion to complete renovations.

This time, the sale is for a less hopeful reason: McTeigue & McClelland is closing.

“The sale ends when we sell everything,” McTeigue says. “I would think we’ll be closed by the end of January.”

For buyers in the market for museum-quality pieces—including a pair of Burma ruby-and-diamond drop platinum earrings (originally $375,000, now $243,750), an 18k gold bracelet loaded with more than 40 carats of blue sapphires (originally $125,000, now $95,000), as well as a host of less expensive fine baubles—the news of McII’s closing is both an opportunity to score heirloom jewels for a song and a harbinger of retail changes to come.

Even though they made it to the heights of the jewelry world—in addition to regularly selling million-dollar pieces to international collectors, McTeigue & McClelland once maintained a strong wholesale business fueled by prestige retailers such as Bergdorf Goodman and Betteridge Jewelers—the model simply wasn’t sustainable. With the shift towards online buying, industry consolidation favoring big global brands, and the fickle tastes of modern consumers, independently owned jewelry brands are facing an uncertain future.

Exhibit A: LVMH’s recent acquisition of Tiffany, a $16.2 billion deal that seemed inevitable to anyone familiar with the pace of consolidation in the jewelry industry. The investment gives America’s most storied jeweler a clear path to the Chinese market, not to mention the time and capital to cement its place on the global stage, and, in exchange, the European luxury group gets a stronger foothold in a category that remains—unlike fashion, watches and beauty—largely unbranded (and, therefore, rife with opportunity).

“More interesting than the acquisition is the extent to which it might accelerate the shift towards a more branded industry,” says Björn Timelin, senior partner at the consulting firm McKinsey & Company in London. “Look at what LVMH has done with Bulgari: doubling sales, increasing profitability, massively investing in marketing. What it suggests is that if LVMH follows the same playbook with Tiffany, this could be a very positive development for the jewelry industry as a whole, with more market investment behind fine jewelry.

“I imagine others would have to follow suit,” he added. “Who’s going to win in that market? Brands that can afford to invest at that level. But it’ll be tougher for smaller and medium-sized brands trying to compete with the big behemoths.”

On the big brand front, the numbers bear Timelin out. In its 2019 interim report, released on Nov. 15, the luxury holding company Financière Richemont—owner of Cartier, Piaget, Van Cleef & Arpels and, as of September, the Italian jeweler Buccellati—noted that sales had increased by 9 percent year over year, led by its jewelry brands and online distributors (i.e., Net-a-Porter and Mr Porter)—and this despite ongoing unrest in Hong Kong, a key market for luxury sales.

Thierry Huron, founder of The Mercury Project, a watch and jewelry consultancy based in Le Landeron, Switzerland, attributes the Richemont brands’ success to two reasons: “One, they targeted very early the Chinese market and are well established there,” he says. “And two, they’re quite focused on their own retail networks, and don’t sell to distributors or wholesalers. Their margins are better and higher, and they can reinvest in communication.”

As the third decade of the 21st century looms, it should come as no surprise that the lion’s share of that communication is digital. And jewelers who don’t keep up—by constantly fine-tuning their SEO strategies, advertising online and engaging on social media—are paying the price.

Indeed, McTeigue says he noticed the first signs of trouble shortly after he and McClelland pulled out of Bergdorf around 2010 (a decision driven by a desire to focus on their own retail clientele).

“Within a year, our web traffic started to go down,” McTeigue says. “We thought maybe it was due to the fact that we didn’t have exposure in New York. But I think we put too much weight on that. We could never figure out a sustainable way—and quite frankly, even an unsustainable way—to drive traffic to our website.”

Instead, McTeigue and McClelland went all-in on brick and mortar, optimistic that a beautiful atelier offering an enchanting retail experience would continue to draw people from near and far. In parallel, the duo struck a wholesale partnership with Barneys in 2016, only to pull out three years later, just weeks before the specialty retailer filed for bankruptcy in August.

One thing they failed to do was perfect their social media game. Yet talk to virtually anyone with a head for marketing about what it takes to connect with younger generations of jewelry buyers, and the answer invariably boils down to one word: Instagram.

“It changes the game because people go to their favorite jewelers directly,” says Lionel Geneste, a Los Angeles-based sales and marketing agent for a handful of rising star Parisian jewelers, including Elie Top, Emmanuel Tarpin and Sylvie Corbelin. “A client recently DMed Emmanuel directly to make an appointment.”

Another factor in an independent jeweler’s success is his or her ability to nurture friendships with clients—as a bulwark against the over-the-top experiences the big brands are putting together to wow their best customers.

“Think about Dolce & Gabbana, who bring their crowd to a place every year, like Sicily, for a three-day-long affair, where they get to be with the designers and some celebrities,” Geneste says. “Bulgari just took everyone to Santa Barbara. Van Cleef flew all their clients to San Francisco. It’s very difficult for others to compete.”

According to Geneste, Top has maintained his best clients despite the encroachment of the big brands by making time to see them on his whistle-stop tours of the States, and offering an original answer to their growing calls for sustainability.

To wit: Both Top and Sylvie Corbelin are promoting their upcycling capabilities to give consumers devoted to eco-consciousness a feel-good way to spend money on fine jewelry. Instead of buying a brand new piece featuring freshly mined gems, customers are invited to hand over an old piece of gem-set jewelry they don’t wear, allowing the designers to repurpose the stones in fresh new styles.

But where does that leave jewelers with a deep desire to push the art of jewelry-making? McClelland is convinced the future will belong to those who value authenticity—something he believes the big brands have squandered in favor of mass appeal. From his perch in Great Barrington, he intends to maintain a small brick-and-mortar showplace for his own designs—expressive jewelry aimed at discerning private buyers who’ve grown tired of branded cookie-cutter styles. McClelland is also gearing up to promote McTeigue & McClelland’s well-received Wildflower collection of engagement rings and weddings bands.

“My hope is that this next chapter of my career as a designer and jeweler is going to be propelled by everything I learned by being part of McTeigue & McClelland,” he says. “That I can look at the jewelers’ art and at where jewelry has come in the first part of the 21st century and say, What can be done that is fresh?”

“The other story is eclecticism,” McClelland concludes. “Tiffany probably has 10 designers working night and day and, to some degree, they’re designing by committee—they have to make it past the cost analysis stuff. That’s the world of commerce. But for a creative, you go the other direction from that—you just try stuff. I’ve tried really hard over the years to be eclectic. You’re surprising people all the time. And that’s my goal.”