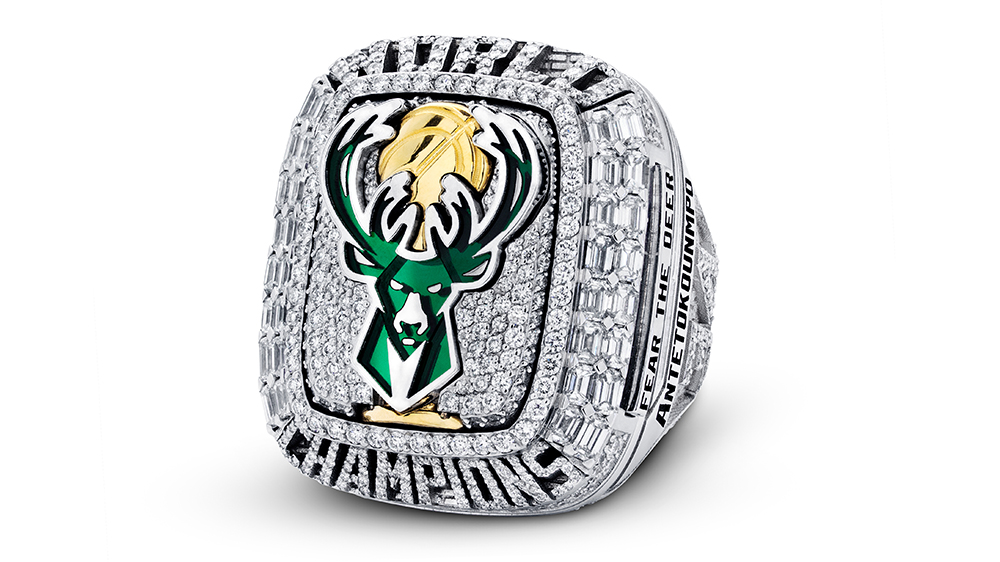 The Milwaukee Bucks have been NBA champions since July, and now they have the bling to prove it.

Star forward Giannis Antetokounmpo and his teammates were presented with their championship rings before Tuesday night’s 127-104 opening night rout of the Brooklyn Nets. Designed in collaboration with jeweler Jason of Beverly Hills, the celebratory bauble features loads of diamonds, a piece that allows it to be worn as a necklace and a QR code that plays highlights when scanned.

So, why did the Bucks turn to Jason of Beverly Hills to help celebrate the second title in the franchise’s history? Probably because the jeweler, whose real name is Jason Arasheben, is increasingly the go-to source for championship jewelry. In the last year alone, he’s helped create rings for the Los Angeles Lakers, Tampa Bay Buccaneers and even Drake’s rec league basketball team. One look at the Bucks’ ring and it’s easy to see why.

The top of the ring is adorned with 360 diamonds, one for each win under the team’s current ownership group. The left side of the ring has 16 emerald-shaped diamonds representing each of last season’s playoff wins, while the right side has the same amount in honor of the team’s 16 division titles. A total of 4.14 carats of emeralds were used throughout the ring, which stands for Milwaukee’s 414 area code. Each ring is also inscribed with a player’s name and number, the record of each playoff series, including “Bucks in 6,” and the team’s “Fear the Deer” motto. Finally, the gold Larry O’Brien on the ring’s face is made from 65.3 percent purity yellow gold, which just so happens to be the team’s win percentage during the 2020-21 season. It’s also surrounded by a bezel of 50 round diamonds, one for each year between the team’s two titles.

There are two features that really make the Bucks’ ring stand out. The first is a push button system—which Arasheben described as its “most complicated” aspect—that flips up so the top of the ring can be worn as a necklace. The reason? Championship rings have gotten so big that they just can’t be worn every day. You’ll also find a QR code underneath the top. The very 2021 detail can be scanned to play a series of highlights from the team’s championship season on your phone.

“We wanted a design that allowed for even greater storytelling,” Arasheben told Robb Report on Wednesday. “A QR code was the perfect way to allow the owner of the ring to see the highlights of the championship season.”

As is often the case with championship jewelry, neither the Bucks or Arasheben have revealed just how much the rings cost. But if you look close enough, the answer is hiding there in plain sight: 16 playoff wins.