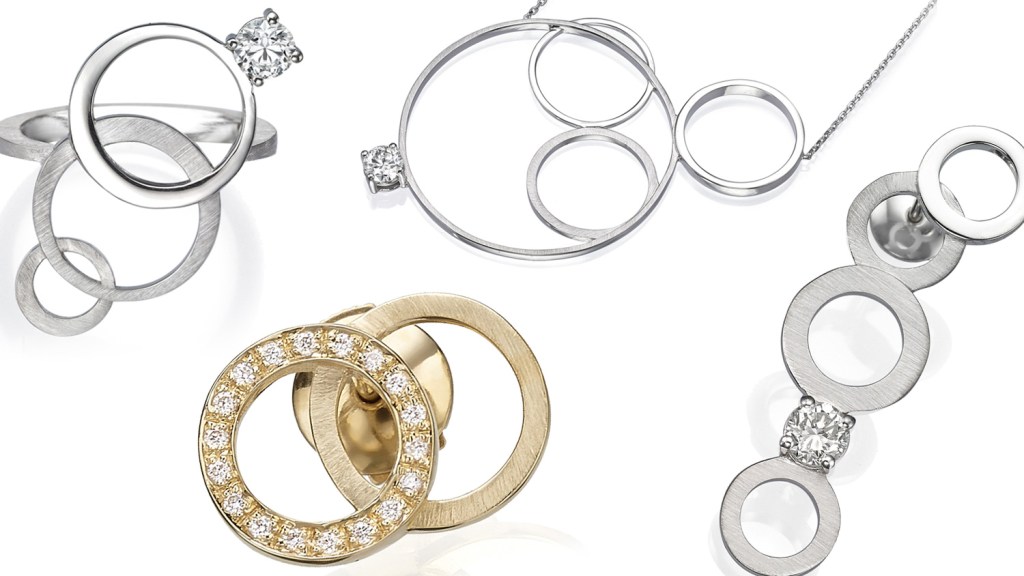 Hadar Nornberg’s jewelry calls upon the Swiss-born artist’s distinctively modern sense of style. “I want my designs to be beautiful, of course,” says Nornberg. “But I also want to recreate and rethink classic forms.” Her latest collection, called Tracing, gathers inspiration from contemporary land art—in particular, the work of artists Walter de Maria and Michael Heizer, whose mesmerizing, large-scale creations typically occupy several miles of open space. While each piece of jewelry has an undercurrent of modernist simplicity, the overlapping loops in Nornberg’s new Affinity and Stagger rings conjure softer organic shapes as well—crop circles, bubbles, and swirling eddies come to mind.

“I associate my designs with contemporary, modern forms, yet with a classic touch,” says Nornberg, who studied fashion design in Paris and is drawn to the unfussy aesthetics of Jil Sander and Rick Owens—the latter she worked with for four years before launching her eponymous jewelry line in 2015.

An affinity for the work of Le Corbusier as well as Bauhaus and Brutalist architecture also imbues Nornberg’s designs. After spending her childhood in Geneva and Tel Aviv, Nornberg lived in Japan, Paris, and New York, absorbing each city’s unique style along the way. Geneva was all about form with functionality, Paris radiated history and uncomplicated elegance; New York vibrated with “amazing, sometimes chaotic energy,” and Japan’s precise, restrained style was coupled with a strong engagement to nature. “All these (places) combined together brought different layers to my work,” she says.

The rounded lines in Nornberg’s new Tracing collection are a progression from her previous designs, which were primarily built around more angular shapes—think ultra-thin square rings with grooved edges and triangular earring studs (similarly bold, sculptural aesthetics have also inspired designers like Gaelle Khouri, Elena Votsi, and Cora Sheibani). “I want my jewelry to be refined, and not overly detailed,” she says. The minimalist quality of Nornberg’s creations make them well-suited to daily wear. “People are sometimes intimidated by the form and geometry of my designs, but they can be worn easily, and with other more classical pieces.”

Nornberg splits her time between Paris and Tel Aviv, where the jewelry is made. The new Tracing collection is primarily crafted from 18-karat white and yellow gold. It can be found at Dover Street Market in New York and London, as well Maxfield in Los Angeles, and Cahier d’Exercices in Montreal.