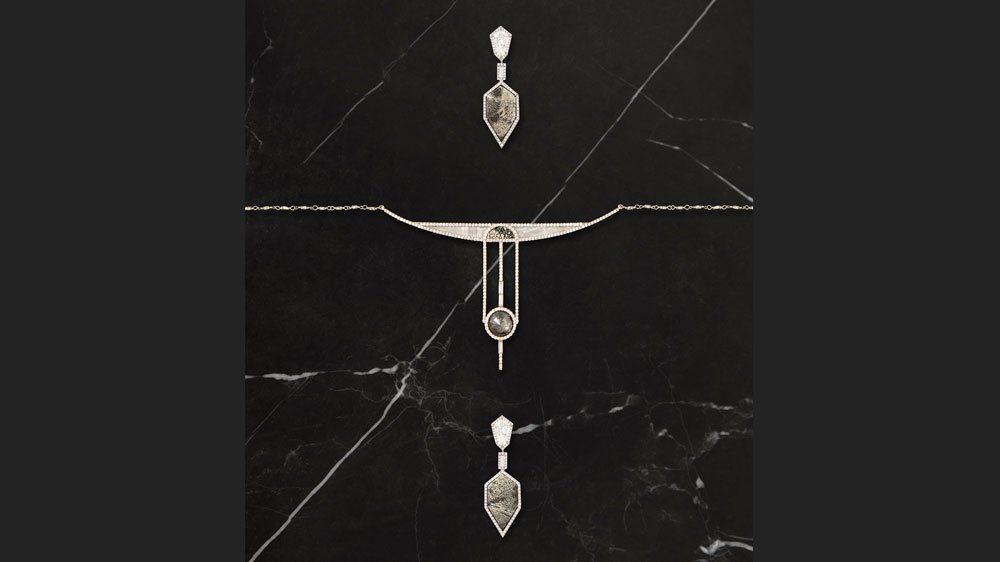 When designer Monique Péan was crafting her first collection of responsibly sourced jewels, she traveled far from her home in New York to the Arctic Circle in search of fossilized wooly mammoth tusks that she later paired with luminous recycled gold and conflict-free diamonds. The prehistorically chic line, which debuted in 2006, quickly established Péan’s reputation as a luxe jeweler for cutting-edge, conscientious collectors.

This spring, her love affair with primordial remains—and the creatures from which they are derived—goes full tilt with a collection of some 25 pieces featuring rare pyritized dinosaur-bone fossils from the Jurassic era. Sourced from the banks of eastern Europe’s Volga River and the Caspian Sea, the fossils bear one-of-a-kind Jurassic minerals and traces of eye-catching glittery pyrite, also known as fool’s gold.

Péan describes the pieces—which come in a subdued palette of whites, blacks, and grays—as “nature’s paintings” for their unique iridescent sheen. “They remind me of [Kazuo] Shiraga’s performative pieces,” she says, referring to the avant-garde Japanese artist.

The necklaces, earrings, and rings also feature elements such as agatized and fossilized dinosaur bone from the Colorado Plateau (near the Four Corners region of the Southwestern United States) and fossilized walrus ivory. In one standout piece—a necklace on a fine chain of antique natural Champagne diamonds—Péan complements the pyritized dinosaur bone with a delicate slice of meteorite, allowing its eventual owner “to wear something of the earth and the cosmos,” she says.

For Péan, the ancient relics are more than just interesting-looking rocks with unique markings; they’re time machines that transport the wearer to a distant past. “Pyritized dinosaur-bone fossils have this mirrored holographic quality,” she says. “They are literally mirrors from the Jurassic period. How fascinating is that?”