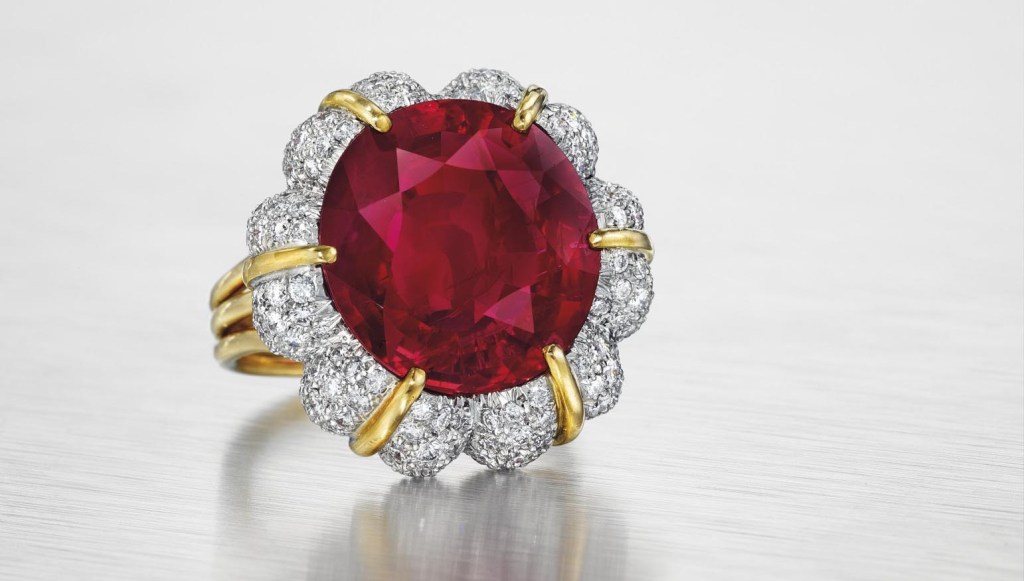 Christie’s is proud to announce its global lineup of spring jewelry sales commencing in New York with the Magnificent Jewels auction on April 20.  With over 250 lots the sale features rare diamonds and colored stones as well as exceptional jewels from Buccellati, Cartier, David Webb, Graff, Harry Winston, Van Cleef & Arpels and more.  We are especially honored to offer additional jewelry from the collection of Carroll Petrie and other prominent families throughout the United States.

The sale is led by the Jubilee Ruby, which is the most important Burmese ruby to appear at auction in the United States in over 25 years; the last time being when a 16.20 carat gem Burmese ruby sold at Christie’s in October 1990.  Featured as an iconic Verdura jewel, the 15.99 carat Jubilee Ruby is a true rarity in its exceptional size, color and quality.  The auction also includes some of the rarest diamonds available in today’s market, including an extraordinary Fancy Intense Purple-Pink diamond ring of 10.07 carats and a perfect D color, Flawless circular cut diamond of 40.43 carats.

Rahul Kadakia, International Head of Jewelry:  “Top quality Burmese rubies of over 15 carats are an absolute rarity in the world of colored gemstones and the record price of $18.3 million achieved for the 15.04 carat Crimson Red Ruby at Christie’s Hong Kong in December 2015 exemplified the voracious appetite of collectors for these gems.  Fittingly, the Jubilee Ruby comes up for sale in Christie’s 250th Anniversary allowing gem connoisseurs the opportunity to own the very best Burmese ruby offered for sale in the United States in over two and a half decades.“

With estimates from $2,000 to $12,000,000 and a majority of lots offered on behalf of Private Collections and Estates, the Magnificent Jewels sale presents a broad, yet select group of fine gemstones and jewelry that meet the demands of today’s discerning market.

The entire Magnificent Jewels auction will be on public view April 15 through April 19, at Christie’s Rockefeller Center galleries.