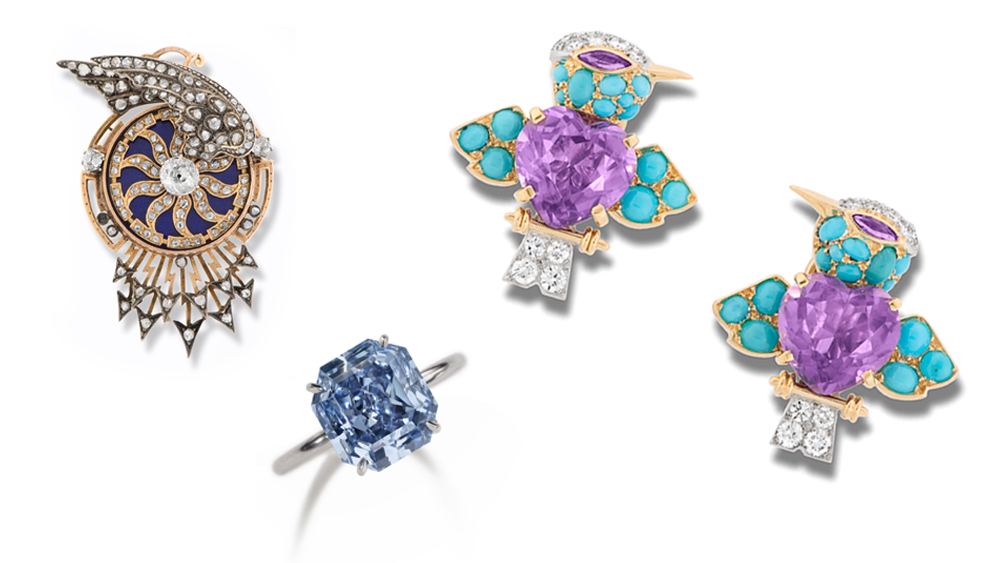 For fashionistas, fall represents the time to pull the most stylish cold-weather pieces out of storage and find the right accessories to complement them. Just in time for the occasion, jewelry experts from Phillips, Christie’s, Sotheby’s, and Bonhams are weighing in on the must-have fall auction lots. From a Fancy Light Pink diamond to a Burmese sapphire ring, these are some of the season’s most anticipated pieces.

Fancy Light Pink in color, this wonderfully feminine and elegant diamond is also sure to turn heads. Weighing 21.19 carats, we have received confirmation from the GIA that this cushion-shaped stone is ‘Type IIa’ – these super-rare stones make up just 2 percent of gem-quality diamonds and they also have the highest optical transparency (Lot 567, estimate $ 4,500,000 – 6,500,000).

It is 40 years since Harry Winston passed away, and we are delighted to be able to showcase his incredible love of diamonds in our upcoming sale. This spectacular diamond necklace is an absolute show-stopper when worn! The nine largest diamonds on the piece have been certified to be D-Colour and Internally Flawless, and looking at the quality of this piece, it is easy see why many people called him the  ‘King of Diamonds’ (Lot 569, estimate $ 4,800,000 – 5,800,000).

This Burmese sapphire is really remarkable, weighing 69.99 carats and mounted as a ring by Cartier. It is extremely rare to find such rich and saturated color in Burmese sapphires of this large size. (Lot 568, estimate $ 3 – 5 million).

The Dodge pearls have everything a connoisseur of natural pearls could want.  Originally ordered by Horace Elgin Dodge, a founding brother of the Dodge Motor Car Company for his wife Anna Thompson, these pearls are steeped in the history of one of America’s greatest entrepreneurial families of the 20th century.  Mr. Dodge paid $825,000 from Cartier for the privilege of acquiring a five strand pearl necklace, which purportedly was formerly in the collection of Empress Catherine II of Russia.  Mrs. Dodge enjoyed them throughout her life and eventually gave the pearls to her granddaughter, who divided the five strands to give to her three children and friends.  Today, Christie’s is honored to be offering the three strands that were reunited when they were offered for the first time at auction in 2008.  To have these two necklaces consisting of three strands of natural pearls in total of such size and quality with incredible provenance makes this an exciting opportunity for our collectors here at Christie’s.

This Egyptian Revival Sautoir from Van Cleef & Arpels is one of the great masterpieces of 20th century jewelry design.  The discovery of Tutankhamun’s tomb in 1922 brought Egyptomania into the forefront of the imagination of both the public and great design houses and this particular necklace, produced in 1924, is one of two known examples made by Van Cleef & Arpels.  The necklace fully captures the Art Deco period through both the motif and the sautoir design, it represents a very rare jewel that would be a highlight of any great jewelry collection.

Phillips’ December Jewels auction, set to relaunch the category here in New York, is shaping up to offer some exceptional pieces. A Victorian diamond and enamel automaton brooch that comes to life with winding is particularly mesmerizing. Undoubtedly inspired by the clockwork revolution of the eighteenth century and the subsequent scientific advances of the Industrial Revolution in the Victorian era, automaton jewels and timepieces were the result of rapidly changing technology. I think of the renaissance woman who wound this pin and sent the spokes and diamonds into a dizzying flight at a tea in the late 1800’s while her friends wore pearls and mourning jewelry. Analogous to showing up to a party in google glasses and paying in bitcoin, she was sensational in her day- donning a kinetic jewel that was nothing short of futuristic!

Another fascinating piece from the upcoming auction is an ojime bead necklace. Originating in Japan, ojime beads were not historically worn together on a strand; rather, they were part of a utilitarian three-piece system consisting of an inro, netsuke, and ojime bead, which worn together on a silk cord, allowed Japanese people to hang possessions from the sash of their kimono. Used over time to symbolize the wearers religious beliefs, curative powers, status in society, and a host of other functions—these intricately embellished adornments each tell a story. The example here dates back to the Meiji period in the second half of the 19th century. This necklace is comprised of a variety of metals, but what makes this piece so desirable are the two highly-coveted gold ojime beads. One gold cylindrical bead depicts a “rakan” or holy man, while the other gold bean-shaped ojime opens to reveal a clandestine hand carved erotic scene, making this bead the most collectible ojime on the strand.

The sale on December 6 also includes a timeless diamond and cultured pearl necklace by Van Cleef & Arpels with a detachable pendant. In addition, we have a pair of amethyst, Persian turquoise, and diamond bird ear clips by Cartier. Many collectors have an affinity for the French ateliers whimsical, colorful animal creations. This fall, we are delighted to present a sale with a variety of jewels for collectors of all tastes and levels.”

Caroline Morrissey, Head of Sales, US

A beautiful example of a large, white diamond exhibiting sensational fire and cut.

An extraordinary example of a Ceylon, displaying a blue similar to a Kashmir, evenly distributed, with a clean table. The size also speaks to its rarity, making it not only a beautiful pieces of jewelry but a stone worth reviewing.

This is a perfect example of how contemporary designers blend materials to create exceptional pieces, which represent the traditional fine craftsmanship found in jewelry, while adding a 21st century flare, speaking to an audiences intrigue for creativity and diversity.

A stunning example of the Retro era, with exceptional craftsmanship, of highly flexible geometric design. Craftsmanship and quality of goods hint to a European designer, true to its period.

Crafted by the renowned house of Cartier, using the highest techniques of craftsmanship and quality of material. An excellent example of the traditional clip designs created in the Art Deco period, believed to have been part of a pair.

It’s rare to find emerald cut colored diamonds, and even rarer to find Internally Flawless colored diamonds. Added to which, a Vivid Yellow of such strong saturation as this is even rarer, plus it is signed by Cartier and comes with a copy of the original purchasing receipt from Cartier New York stipulating that it was purchased for $583,000.

The 5.93-carat pear-shape and 2.37-carat round brilliant are both D color, Internally Flawless and Type IIa which means they contain little or no nitrogen – therefore meaning they are chemically pure and putting them into a bracket occupied by fewer than 2% of all diamonds. The 2.55-carat Natural Fancy Vivid Orangy Yellow pear-shape brings a wonderful juxtaposition of color against the pure white of the almost-6 carat pear-shape and rounds. That this is signed (by) Cartier is an even bigger draw and makes this an extremely rare haute joaillerie piece from Cartier.

Favored by France’s King Louis XIV who once owned what has since become the most famous blue diamond of all, the Hope Diamond, blue diamonds are extremely rare and are only becoming rarer, with production dwindling to just a few dozen per year, principally from South Africa. This 1.45-carat marquise cut is an exceptional example of a blue diamond as it has a very pure color – GIA have graded it Natural Fancy Intense Blue, with no secondary color, and have given it VVS1 clarity with the potential to have it polished to be Internally Flawless, adding further to its rarity and appeal.

Three gem-set bracelets, by Van Cleef & Arpels, 1926. Estimate: £70,000-100,000 (US$91,000-130,000)This set of three gem-set bracelets are rare examples by Van Cleef & Arpels from the early Art Deco period. Instead of the mainstream choice of rubies, sapphires or emeralds, a more unusual choice of amethyst, citrine and peridot was used, creating a unique and distinctive colored palette.

This handsome rectangular step-cut diamond, which weighs over 24.00 carats, is of the finest color and clarity and has been designated as a Type IIa diamond making it chemically pure. Its original purchasing receipt from Cartier New York stipulated that it was purchased for $583,000 and helps make this ring very desirable.