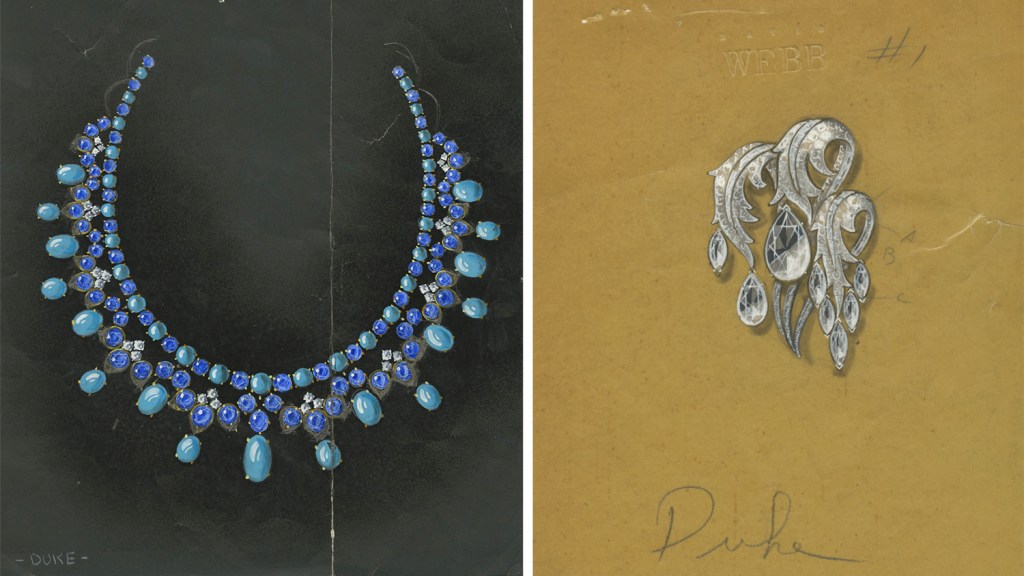 For as long as there have been wealthy consumers with an eye for beauty, private patronage has given way to some of history’s greatest works of art. Michelangelo had the Medici, Rothko had the de Menils, and, as a new exhibition demonstrates, David Webb had Doris Duke. Designing for Doris: David Webb Jewelry and Newport’s Architectural Gems recently opened at Rough Point, Doris Duke’s home in Newport, Rhode Island, and illuminates the many spectacular jewels yielded over their years-long collaboration.

The heiress of a vast fortune at the tender age of 12 (after her father, James Buchannan Duke, a tobacco titan and the namesake of Duke University, passed away), Doris Duke wasn’t your conventional socialite. She had a pioneering collection of Islamic art, dabbled in competitive surfing, and sang in a gospel choir. Considering that Duke was born in 1912, these were rather colorful interests for a woman of her stature—which made her a perfect muse for David Webb.

At the height of his career in the 1960s, Webb revolutionized fine jewelry by creating bold, irreverent pieces suited to bold, irreverent women. Feminism was beginning to make waves, and Webb’s aesthetic—vividly colored, large-scaled, and impossible to ignore—catered to modern women’s desire to break away from demurity. His fans included almost every bold-faced name in the Social Register and such powerhouses as Elizabeth Taylor, Diana Vreeland, and the Duchess of Windsor. But Doris Duke’s relationship with Webb was unique in that many of the pieces she collected were created specifically for her, the fruits of an aesthetic tête-à-tête between these two visionaries.

As the exhibition displays, Duke and Webb had several overlapping passions—most notably a love of Asian art. One vitrine juxtaposes quintessentially Webb designs like carved jade earrings and an elaborate enamel and coral cocktail ring alongside an antique Chinese enameled canister from Duke’s collection. “I truly think that Doris Duke stretched his visual language and challenged him,” says Mark Emanuel, co-owner of David Webb. “She was this wonderful apparition in David Webb’s landscape, a dream client that allowed him to flex all of his design muscles.”

Most of the pieces Duke commissioned began with loose gemstones or older jewels she’d inherited, which she brought to Webb to be reimagined into something more in line with her eclectic interests. “It was about the artist catering to the self-expression of the client,” says Emanuel. “Her inheritance of diamonds and gemstones was a palette that was irresistible to David Webb.” The most showstopping piece to come out of their collaboration was a pair of earrings centered around an incredibly rare pair of gumball-sized, pear-shaped natural pearls that Duke just happened to have lying around. Webb suspended each one within a wreath of diamonds, from which dangled 11 more natural pearls—a design that nodded to Duke’s love of traditional Indian art and jewelry. The original earrings have since fallen into the hands of one very lucky private collector, so the style was re-created for the exhibition by David Webb’s New York City workshop using Mughal-carved emeralds in place of the original’s pearls (and, even better, the emerald earrings are available for purchase).

While the jewels are stunning, the real highlights of the exhibition are all of the sketches, notes, and assorted ephemera that provide a glimpse into the relationship between Duke and Webb. One can see the design process playing out, from an initial quick sketch of several options for Duke to veto to technical renderings and gouache paintings. The exhibition draws parallels between Duke’s work with Webb and her work with the Newport Restoration Foundation, an organization she founded to preserve over 80 colonial buildings that were destined for destruction. Seeing Duke’s presence in the architectural drawings for Newport Restoration Foundation’s projects reinforces what a special rapport she and Webb shared. “I think, for Doris, it was an unusual relationship because of the caution with which she approached other people in that kind of transactional relationship,” says Margot Nishimura, director of museums at Newport Restoration Foundation and the curator of the exhibition. “To have found somebody with whom she’d entrust these projects is pretty unique.”

While both Webb and Duke have passed away, it’s inspiring to see that the David Webb workshop is still working in the same spirit today. Thanks to the savoir-faire of David Webb’s craftsmen and the brand’s extensive archives, they are able to produce pieces to the specifications that Mr. Webb had originally detailed (such as those emerald earrings). And, should you have a desire for the full Doris Duke experience, the brand still works with clients on custom commissions—regardless of if you’re providing your own inherited gems. Designing for Doris: David Webb Jewelry and Newport’s Architectural Gems will run through November 11 at Rough Point.