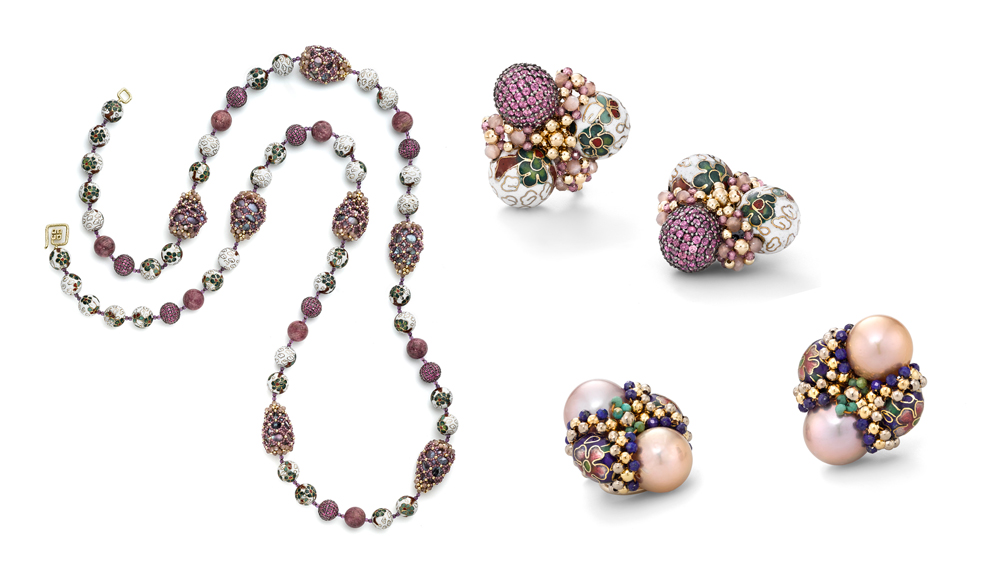 Cloisonné—have you heard of it? It’s an exquisite, exceedingly challenging enameling technique that dates back to ancient Egypt (pharaohs and queens sported it on bracelets, decorative pectoral plates and earrings) and blossomed during the Byzantine Empire. In the mid-1800s, Chinese-made cloisonné regained popularity and was frequently exported to the U.S. Today, New York–based designer Chris Davies is refreshing the look, piece by piece, in his new Silk Road collection.

“Making [cloisonné] is incredibly time-consuming,” says Davies. “A single cloisonné bead can involve hundreds of hours.” Each bead is set with a gold wire inlay, which is then filled with glass enamel and fired in layers inside the cells of the wire formation. The resulting design can depict abstract shapes, detailed flower blossoms, or picturesque scenes. The word cloisonné itself comes from the French word for “cell” (cloisons), which was often used to describe the small monastery rooms where monks lived.

Davies’ first encounter with cloisonné was through his grandmother, who traveled extensively in China and collected the designs herself. “I was less than eight years old when my grandmother picked up a small 19th-century cloisonné enamel vessel in her private collection and explained to me what it was,” says Davies. “I was incredibly lucky to have family collections that I could actually touch and hold and grandparents who were passionate about sharing the history of these objects with me.”

Davies, who studied art history, religion, and ancient civilizations at Vassar, learned how to do cloisonné during a goldsmithing course at the Jewelry Art Institute in New York. This meticulous, time-consuming practice gave Davies a profound respect for the design. “In the great ‘Silk Road’ tradition, I am bringing together East and West and celebrating an art form that will one day disappear and most likely will never be practiced again in the same way and at the same level of quality,” says Davies. “It’s one of those processes that has intangible cultural heritage. It’s just so precious and should be celebrated, valued, and understood.”

For his latest pieces, Davies uses hard-to-find antique cloisonné, much of which was made by artisans who have long since passed on. Today’s remaining makers in China are now in their eighties. “I’m always on the hunt,” says Davies. “I’m going to various sources around the country—there’s a little bit here and a little bit there, but really, nobody has a big cave of this stuff.” By placing the beads alongside his own 18-karat-gold woven granulations and lapidary work, Davies imbues each design with a modern sensibility.

Plus, Davies is sourcing examples with rare coloring, to add to their contemporary look. “Even within the genre, I’m really seeking out examples that stand out,” he says. “Some of the colors I’m using are extremely unusual, like lavender and these beautiful persimmon colors. These are cloisonné colors that you really didn’t find, even 40 years ago.” Davies arranges the cloisonné alongside pearls, rubies, rainbow moonstones, jasper, and carnelian. “The way that we’re presenting it is something that nobody’s even seen before. I think a successful piece of design that incorporates a vintage or antique element has to feel new,” he says. “It shouldn’t feel derivative. It’s not historical replica jewelry; it’s a new design.” Davies’ Silk Road cloisonné pieces are available at select retailers and start at $3,950.