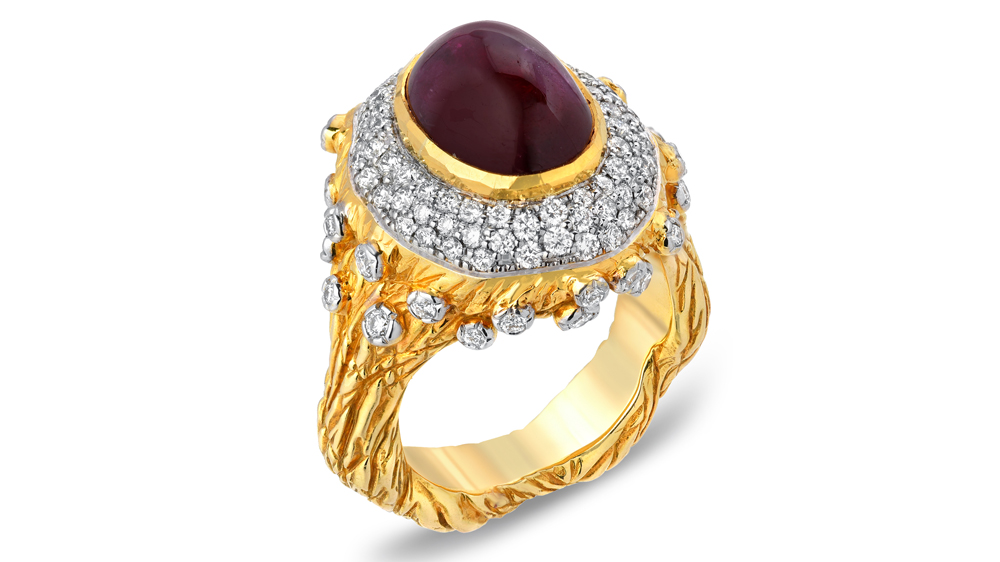 Red-hot rubies from ice-covered Greenland? Yes, in fact, the coveted crimson gem was discovered on the Nordic island decades ago, in 1966. But, since then, only limited mining has taken place, so quality examples from other sources (like Thailand and Africa) have become the norm—and garnered big numbers at auction.

But now, the world’s largest island (best known for its fish and shrimp exports) is investing in more excavations; which means we might all be seeing more of the Greenland ruby in the coming years. New mining company Greenland Ruby has been harvesting the gems since last summer, and recently partnered with Los Angeles-based designer Victor Velyan to craft a limited series of heritage-inspired ruby jewelry.

“Greenland rubies are thought to be nearly 3 billion years old,” says Velyan, who started off as a diamond setter and created award-winning pieces for other brands before launching his own. “So, in order to do the gemstones justice, I wanted to pay homage to their unique heritage by creating pieces that look antiquated to begin with.” Designs in the Victor Velyan x Greenland Ruby collection currently include an earring, ring, and cuff made with 18-karat and 24-karat gold and white diamonds.

“I utilized old world techniques inspired by ancient craftsmanship,” Velyan explains. “All of the pieces were painstakingly crafted by hand, including the texturized finish on both the cuff and the ring. My entire collection is inspired by ancient traditions in craftsmanship, so in thinking about these brilliantly colored gemstones, lying under the stark white of harsh, arctic conditions for billions of years, something about them really spoke to my core passions.”

When asked to describe the special hue of a Greenland ruby, Velyan compares it to a fine red wine—an alluring, “deep burgundy” tone. Equally appealing to Velyan was the mining company’s ethical practices. “I’m moved by different characteristics of every gemstone that I encounter. That said, it was exciting to me to partner with Greenland Ruby, also based on the fact that the company adheres to strict ethical, social, and human rights as well as environmental laws and responsible practices. They guarantee protections and ethically sustainable conditions for each of their employees, and that’s also very important to me.”

Though Velyan will add more designs to this capsule, he plans on keeping the collection small. The new Victor Velyan x Greenland Ruby can be seen on the designer’s site and will be sold through Neiman Marcus, Saks Fifth Avenue, and Bergdorf Goodman.