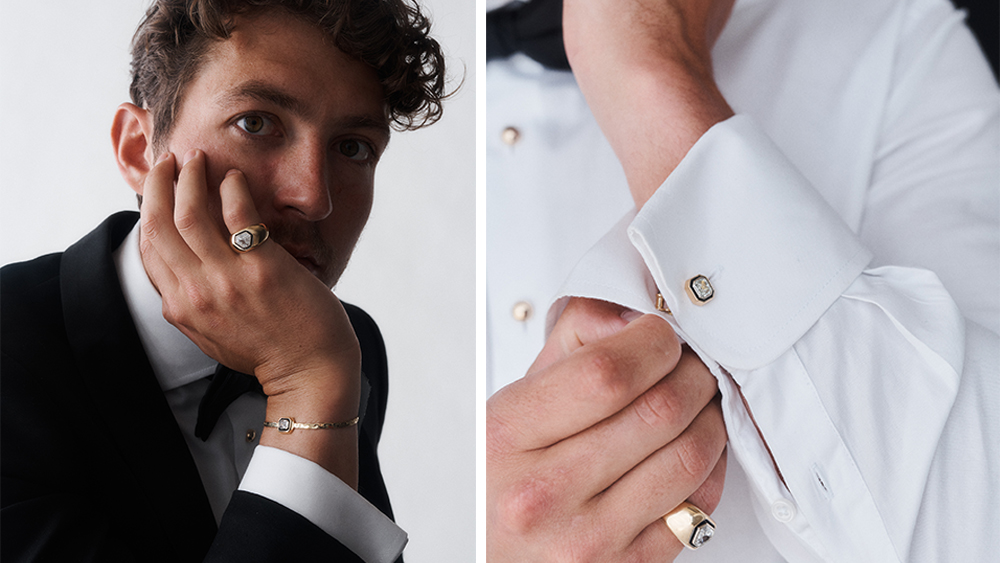 It all started with a pinky ring. Jewelry designer Nina Runsdorf had a 3.5-carat rock and wanted to create something for herself that was less conventionally precious than the refined jewels she typically makes. “Everybody loves a good pinky ring,” Runsdorf says of the logic behind the resulting bauble. “It’s just a really fun way to wear an accessory that’s not as serious—it’s certainly a conversation starter.”

Although it wasn’t her plan, the design quickly began earning compliments from guys, leading Runsdorf to venture into the world of men’s jewelry. While a sparkler of that size may not be for the faint of heart, those of more understated tastes needn’t fear: “Men don’t have to wear a huge-sized [diamond],” she says (think: less Slick Rick and more Pharrell). She turned the flash down even further by bezel-setting the stone (which literally tones down the sparkle by making the diamond flush with the band, meaning it reflects less light, and framing it with inky black rhodium.)

Even the cut of the stone is decidedly masculine. “We did this really cool shield, which is super fun because it’s supposed to be like the Superman ring. It’s classic, but it has a little bit of a twist making it very approachable and wearable all the time.”

That ring grew into a five-piece men’s collection, starting at $13,800, consisting of an asscher-cut diamond stick pin (which she recommends either popping “into a casual jacket with jeans or wear it with a tux for a special occasion,” as the likes of Jamie Dornan and Wilmer Valderrama did at this year’s Oscars), a woven chain bracelet with a radiant-cut diamond, radiant-cut diamond cufflinks and a yellow-gold and rhodium stud set.

“These pieces should amplify [a guy’s] lifestyle and wardrobe, seamlessly working into every day, while offering something special for those unique occasions,” she says. Where to begin your collection? “Every man needs a really beautiful cufflink and stud set. It’s timeless, but it also has its own style. And if a man is going to wear jewelry, they always will be okay with wearing cuff links and studs—even if that man is super conservative.”

Stripped back to their purest form—simply diamonds and gold—these designs are as close to universally appealing as jewelry gets. As Runsdorf says, “It’s not just for men. It’s not just for women. It’s for everyone.” The only rule when it comes to wearing jewelry, it seems, is that there are none.