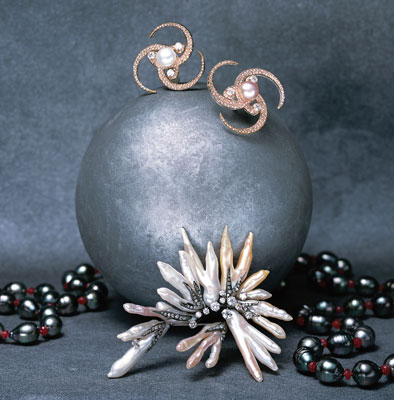 Even when abetted by the most advanced pearl-farming methods, an oyster’s chances of producing a high-quality South Sea pearl are no better than about 200 to 1. The Paspaley pearl farms, located predominantly in the Indian Ocean off of northern Australia, are a leading source for these lustrous, large, round, creamy-colored, and flawlessly complexioned specimens, which, because of water pollution, few if any oysters now produce naturally. Nicholas Paspaley, whose children now run the business, established Australia’s first pearl farm 50 years ago in Kuri Bay, north of Broome. Today, the company has some 20 farms, where it cultivates pearls in the giant silver-lip and gold-lip Pinctada maxima oysters that are found only in this region of the world.

At depths as great as 260 feet, divers gather these oysters while adhering to strict quotas that the Australian government has imposed to preserve the species. In the wild, a pearl forms around a parasite or a shell that becomes lodged within the oyster. The oyster reacts by secreting layers of nacre—a smooth, hard crystalline substance—around the irritant, and those layers eventually form a pearl. On board a vessel that serves as a kind of floating laboratory, Paspaley technicians implant each oyster with a spherical piece of a freshwater mussel shell, around which, in theory, the oyster will secrete nacre. Divers then return the oysters to the sea in nets that allow the animals to feed while making them easily accessible to the technicians, who nurture and monitor them for the few years it takes to produce a gem. Every two weeks during that period, the nets are briefly brought on board to remove from the shells any marine growth, which can carry parasites or diseases that might disrupt the formation of the pearls.

Despite these efforts, on average, only about half of the oysters will produce a South Sea pearl, and less than 1 percent of those will be of the quality that Chanel uses for its new Les Perles de Chanel, a collection that includes pieces in which large South Sea pearls seemingly spring from gold and diamond spheres and sunbursts. In a cuff by British designer Stephen Webster, enormous South Sea pearls appear to be rosebuds at the tips of black- and white-diamond pavéed thorny vines. These pieces—as well as others designed with pearls of various colors, round or irregular-shaped Tahitian pearls, elongated or nuggetlike freshwater pearls, or domed mabe pearls—demonstrate how versatile the gems have become, however painstaking and uncertain their cultivation is.