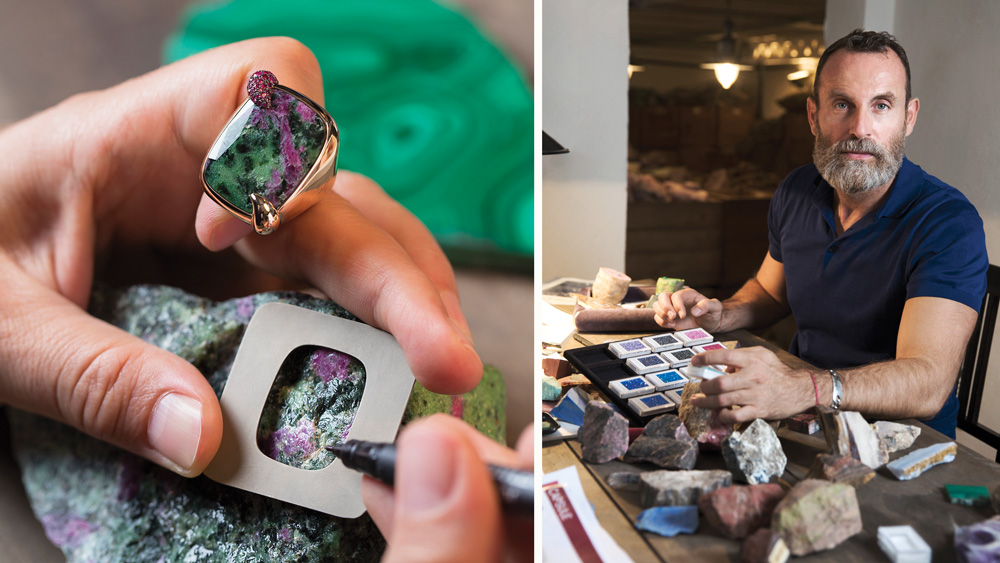 “Every stone has a story to tell,” says Pomellato’s Vincenzo Castaldo. The creative director recently collaborated with the German gemstone merchant and cutter Constantin Wild on a series of rings—pieces that not only celebrate Pomellato’s 50th anniversary this year but also reveal the unique characteristics of stones not typically used in the brand’s fine jewelry. Known for bold, colorful designs that evoke a fashionable take on fine jewelry, the Milanese company wanted to express its sense of style using different materials that, Castaldo says, “represent a new preciousness.” So he searched for hard stones, such as chrysocolla and zoisite, and then turned to Wild, who comes from a centuries-long line of gemstone cutters, to transform the rocks into works of art using the ritratto (portrait) cut.

“It requires an expertise to cut hard stones,” Castaldo says. “You need to find the exact part of the stone where there is a density of color and where the veins and semitransparency converge to create a unique image.”

Castaldo spent over a year working alongside Wild, visiting the cutter’s workshop in Idar-Oberstein, Germany, many times to help uncover the most interesting angles before cleaving the rock. “We wanted to find the part of the stone that tells a story, shows a landscape, or suggests a dream,” says Castaldo. The Pink Hawaiian Peony ring, for example, features a large rhodochrosite with pink crystals in patterns and shades that he says resemble a Hawaiian sunset, while the Summer Paradise ring has a large greenish-blue amazonite center stone with whitish bands of feldspar that give the impression of sea-foam-covered waves. Like a work of art, each large stone is framed in a gold setting with gemstone accents. “Mother Nature only needs a little help from us,” says Castaldo, “to express all her majesty and beauty.”

Here Are the Best Ways to Insure Your Valuable Jewelry