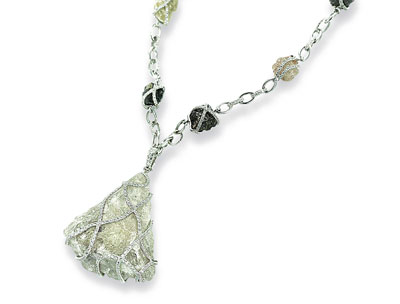 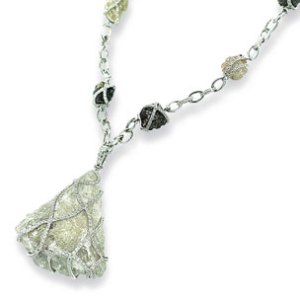 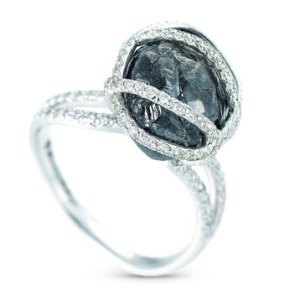 A diamond usually is coveted for its brilliant sparkle, the result of light reflecting off the dozens of precisely positioned facets that a diamond cutter has made. But not everyone believes that this type of human intervention enhances the appearance of the gem. For his new collection of edgy and innovative jewelry designs, Daniel Eskapa, chairman and founder of Diamond in the Rough, leaves the stones in their natural state, allowing them to retain the appearance they have had since being formed in the earth billions of years ago.

The organic-looking stones have a mysterious quality, with shadowy inclusions that appear to radiate light from deep within the diamonds. “Each diamond is unique; no piece of rough is ever the same,” says Anjanette Clisura, president of Diamond in the Rough. “Nature gave us diamonds with their own beauty, luster, and brilliance; there is no need to alter them.”

Diamond in the Rough’s creative team bases each design on the particular characteristics of a stone. The collection, which debuts at Bergdorf Goodman this fall, employs an array of colored rough diamonds: silvery white, yellow, green, cognac, and rose. One standout necklace, priced at $250,000, features a large, silvery white 106-carat stone wrapped in what appears to be a thread of pave diamond and gold.

Eskapa frequently travels to Antwerp, Tel Aviv, and several African countries, where he culls premium specimens for his collection from the thousands of raw stones that he views. “Very few people deal in rough diamonds,” says Eskapa, who purchases mainly from dealers who buy directly from mining companies or mine the diamonds themselves. “These stones come right from the source, and they are in high demand, so you need to move quickly and pay cash when buying them.”

While it may be unusual, Eskapa’s design treatment is not novel. The practice of using rough stones in jewelry dates back thousands of years. In India, where the gems were first discovered, diamonds were prized for their inherent radiance and attributed with magical properties. In fact, the ancient Indians believed that the stones would lose their healing and protective powers if altered.

Today, most people would not even recognize a raw diamond, but that does not concern Clisura, who believes that Diamond in the Rough’s designs will attract a following primarily because of their intriguing contemporary, yet somewhat primitive, appearance. “The fact that they are diamonds,” says Clisura, “is a bonus.”