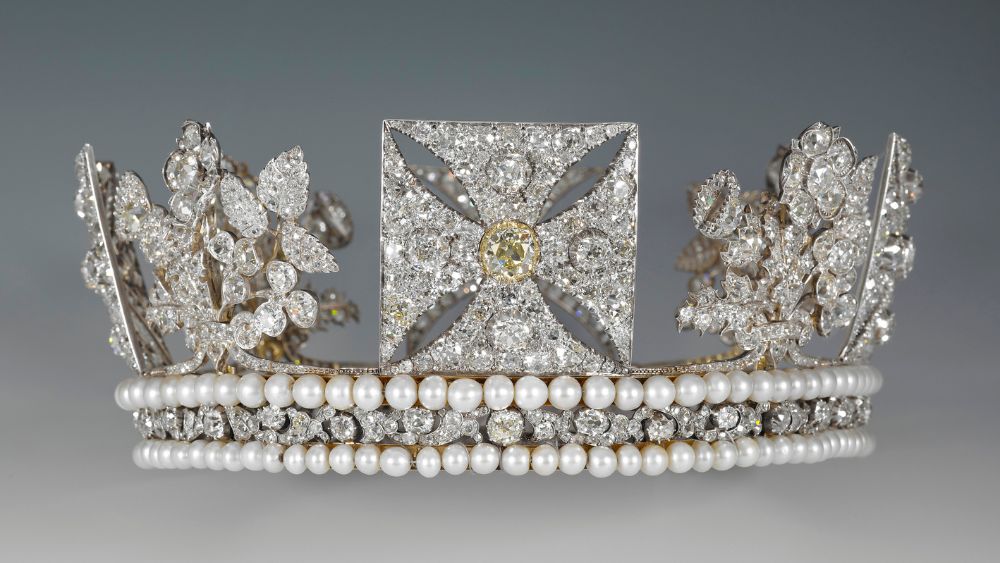 Holding onto precious jewelry has been the royal family’s jam for generations. Now a new UK exhibition is putting those skills—and the heirlooms they’ve culled—on full display.

The show, organized by the Royal Collection Trust, showcases pieces from Her Majesty’s extensive prized jewelry collection. The exhibition, entitled “The Platinum Jubilee: The Queen’s Accession,” opened to the public on Friday inside the State Rooms at Buckingham Palace.

On view are jewels that have great sentimental value to the Queen, including items worn by the monarch throughout her lifetime—passed down from generations and donned during portrait sittings. Among the pieces on display, the most recognizable may be the Diamond Diadem crown and The Girls of Great Britain and Ireland tiara. Other jewels, such as a Dorset Bow brooch and a pair of diamond bangles, are being shown for the first time.

The Queen wears The Girls of Great Britain and Ireland Tiara (left), The Queen wears the Diamond Diadem and the Nizam of Hyderabad necklace (right)  Dorothy Wilding l The Royal Trust

The famous Diamond Diadem is set with 1,333 brilliant-cut diamonds and 169 pearls. The crown was originally created for George IV’s coronation in 1821 and was worn by the Queen on the day of her coronation in 1953. She has also worn it to almost every State Opening of Parliaments.

The Girls of Great Britain and Ireland tiara was passed down to Princess Elizabeth on her wedding day in 1947 by her grandmother, Queen Mary. At the time, the future Queen Mary was given the tiara upon her marriage to the future King George V in 1893. On this occasion, she was also presented with a Dorset Bow Brooch and a pair of bangles believed to be made in India.

The Girls of Great Britain and Ireland Tiara  The Royal Trust

Other notable jewels on view include the platinum Nizam of Hyderabad necklace set with 300 diamonds, the Vladimir Tiara with removable emeralds and the Delhi Durbar necklace with an 8.8-karat diamond pendant.

The Vladimir Tiara  The Royal Trust

Accompanying the heirlooms are a series of portraits taken by Dorothy Wilding, who was appointed as the Official Royal Photographer of the Coronation in 1937. Wilding first began photographing the royal family in the late 1920s. In the 24 historic images on display, viewers can see the exact jewelry that The Queen wore during each of the sittings.

“The Platinum Jubilee: The Queen’s Accession” will run through October 2.