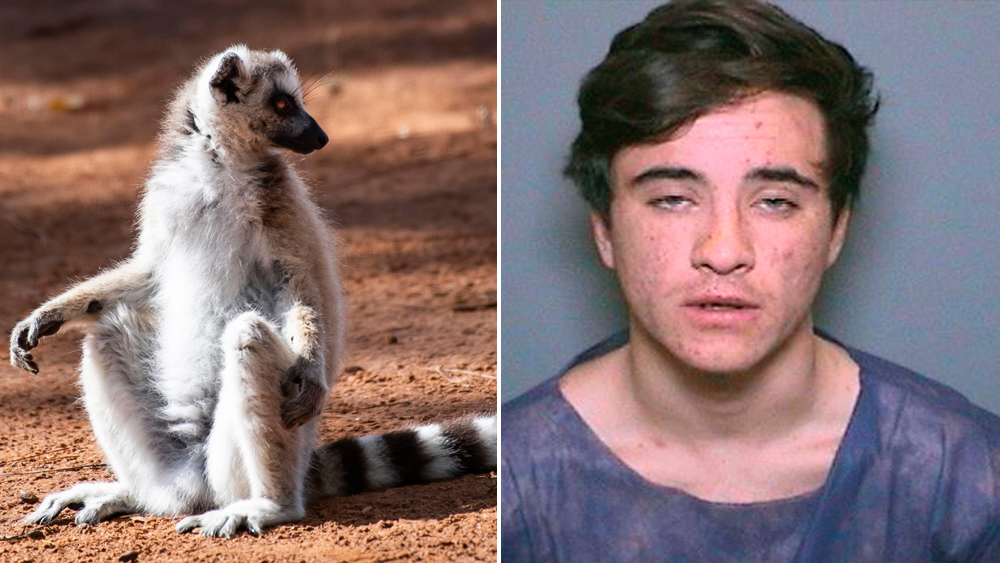 Try as they might, some teens just can’t stay out of trouble. Take, for example, the case of 19-year-old Aquinas “Quinn” Kasbar of Newport Beach, California. On Monday, the teen pleaded guilty to a federal criminal charge for stealing a critically endangered ring-tailed lemur, reports the Washington Post.

The theft occurred late last July, when Kasbar allegedly broke into the Santa Ana Zoo after it had closed for the day, then cut a hole in the lemurs and capuchin monkeys enclosure, and made off with 32-year-old Isaac, believed to be the oldest ring-tailed lemur in captivity in North America. According to the paper, despite a thriving illegal market for the “critically” endangered animals, Kasbar claims he didn’t intend to sell Isaac; rather he said he wanted to keep him as a pet. It would appear that the teen soon realized the folly of his ways, as within hours he is said to have placed Isaac in a plastic container outside the Newport Beach Marriott with the notes “Lemur (with tracker)” and “This belongs to the Santa Ana Zoo it was taken last night please bring it to police” written on top.

The whole incident, which Kasbar’s lawyer called “a mistake he made as a high school student,” reportedly cost the zoo $8,486. The teen, who faces up to a year in federal prison and a $100,000 fine, will be sentenced on October 28.

While stealing a rare zoo animal would be more than enough trouble for your average adolescent, it apparently wasn’t for Kasbar. Authorities only became aware of the teen after investigating a series of break-ins he’s suspected of having perpetrated in Balboa Park, a wealthy harbor-side community within Newport, over the past year.

Police first started looking into Kasbar in late November, after a $4,500 Chopard diamond ring popped up at a local pawn shop. The ring’s serial number matched that of a ring that had been stolen as part of an October break-in during which $75,000 worth of jewelry was snatched. The ring was then traced back to Kasbar, who, astonishingly, had given his name and his parents’ address to the pawnshop for its records.

But that wasn’t the teen’s only slip-up. He also was listed as the seller for $52,000 worth of diamonds at another pawn shop. Police also allegedly saw the teen dump a stolen safe which had once contained passports, a Rolex and $4,000 in cash. He was then connected to a storage unit in Newport Beach, where Police reportedly found even more luxury goods, including several Fender guitars and $20,000 worth of Birkin bags, including one made of ostrich skin.

This is not Kasbar’s first brush with notoriety in the Newport area. The teen once achieved a small measure of internet fame after a video of him surfing the Pacific Ocean on an air mattress went viral.  Now, he will be subject to a different kind of scrutiny, as he prepares go to trial for the alleged burglaries. He has pleaded guilt to 29 felonies and three misdemeanors tied to the crimes.