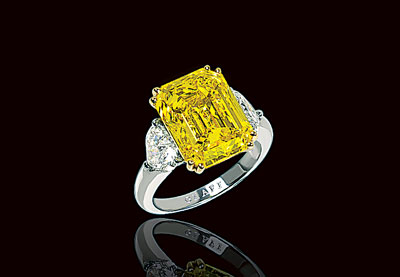 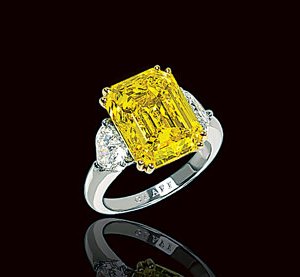 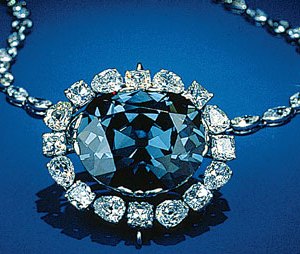 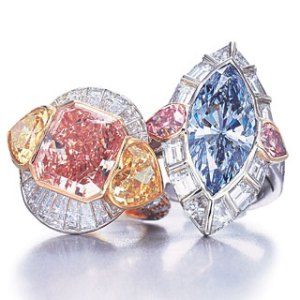 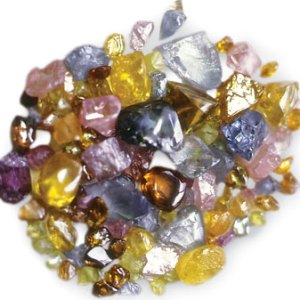 Traces of chemical elements in the earth create a full spectrum of colored diamonds—ranging from the more common shades of yellow and pink to the exceedingly rare blue and red. These elusive specimens have captivated collectors for centuries with their vivid brilliance, but today, values are skyrocketing as supplies grow even scarcer.

Featured in books, articles, and amusing folklore discussing everything from its inscrutable provenance to its numinous power, the Hope diamond, a reputedly cursed, flawless 45-carat sapphire-blue stone, is perhaps the world’s most famous gemstone. It is widely held that the Hope was cut from the French Blue, a 67-carat stone that was looted from the French crown jewels in 1792 during that country’s revolution. The Hope has passed through the hands of four kings—Louis XIV, Louis XV, and Louis XVII of France, and England’s George IV—and, the nephew of Henry Philip Hope, the diamond’s namesake, sold it to pay off a gambling debt. In 1910, American Evalyn Walsh McLean, whose husband, Edward McLean, was heir to the Washington Post newspaper fortune, acquired the stone from Cartier and subsequently experienced a string of personal tragedies, including the loss of two children. These events added credence to the notion of a curse, which otherwise derives from only groundless legend and the fates of fictitious characters—assuming you dismiss any connection between Louis XVI’s demise and his possession of the diamond. Two years after Evalyn Walsh McLean’s death in 1947, Harry Winston purchased the diamond and later donated it to the Smithsonian Institution in Washington, D.C., where it attracts nearly 6 million visitors annually.

“If the Hope diamond was not blue, it’s unlikely that we would know anything about its fascinating history,” says Jeffrey E. Post, curator of the National Gem and Mineral Collection at the Smithsonian Institution. “Colored diamonds are so rare that people tend to follow them through history, and that’s why they have taken on a certain mystique.” Post says that he knows of no other blue diamond of similar quality and size.

“The mere fact that only one out of every 200,000 diamonds might be blue, including very pale shades, makes an intensely colored stone a rare and fascinating natural occurrence,” continues Post, who has been overseeing the Smithsonian’s collection for 21 years. “Most people will never see an important colored diamond close up, other than in a museum.”

Such extreme rarity and preciousness has beckoned a growing audience of collectors and connoisseurs, who are driving up auction prices to record-breaking levels and contributing to a scarcity of these stones among even the most elite jewelers.

Also known as fancy diamonds, colored diamonds are the by-products of negligible amounts of elements in the earth that alter the color of the diamond crystal. Yellow diamonds owe their color to nitrogen, sometimes combined with hydrogen; green diamonds are the result of irradiation from uranium or other radioactive materials; and the presence of boron creates a blue diamond. These stones, found primarily in Africa, Australia, and Brazil, are graded on an industry scale based on their color saturation—designated from faint to the most-valued fancy intense and fancy vivid.

“In general, any strongly colored diamond is quite rare, and the more saturated the color, the rarer still,” says John King, who, as the GIA Gem Trade Laboratory’s authority on colored diamonds, has evaluated the world’s most important stones, including the Hope diamond. The rarest and most valuable color varieties are red, purple, green, and orange. More common are pink, yellow, and brown diamonds, but they are extremely scarce in intense shades and large sizes.“Finding a specific colored diamond is not easy,” says one Swiss collector, who is fascinated by the stones’ endless variety of colors and shapes, as well as their brilliance and rarity. “It may take years to get what you want, if it appears at all.” In his home, the collector, who, because of the value of his collection, asked that his name not be used, displays his collection of about 150 loose diamonds arranged by color in transparent boxes. “They offer the promise of eternity,” he says, referring to their durability. (Diamonds are the hardest known natural substance.) His most prized stones are a deep blue, an intense green, and a deep purplish pink. Each weighs less than a carat, but he treasures them for their color saturation.

In this respect, the Swiss collector is typical of most connoisseurs. The Hope diamond’s allure notwithstanding, a colored diamond usually is coveted because it is understatedly sublime. “Colored diamonds are appropriate for today’s lifestyle, especially with safety concerns,” says Lisa Hubbard, executive director of international jewelry for Sotheby’s. “They tend to be smaller, more subtle, and sophisticated—they do not shout from across the room. Most people won’t even recognize that they are diamonds, only those in the know.”

Such subtlety and Sophistication comes at a premium. Recent auction prices for colored diamonds have surprised even experts, who have grossly undervalued them. At Sotheby’s April sale in New York, a 3.12-carat pear-shaped intense blue, with an estimate of $450,000 to $550,000, sold for $956,800. At the same sale, a 3.35-carat modified triangular, brilliant-cut blue diamond sold for $699,200, far greater than the $180,000 to $220,000 estimate. “There is nothing artificial about this market,” says Hubbard, noting the rapid price escalation in recent years. “There will never be a huge cache of these stones; just like a great piece of Cartier Art Deco jewelry, there is limited supply.”

Christie’s auction house also has witnessed skyrocketing prices. At its New York sale in June, a ring set with a 6.21-carat marquis-cut blue diamond flanked by two small fancy purplish pink diamonds, part of the Margaret Adderley Kelly estate, sold for $1.4 million; the estimate was $400,000 to $600,000. A week earlier at Christie’s Magnificent Jewels sale in Hong Kong, a recently mined Brazilian 3.10-carat vivid purplish pink stone sold for $1.8 million, or about $580,000 per carat. Dealers purchased both of these stones, offering evidence that even industry insiders must pay top dollar to acquire such diamonds.

Veteran dealer Alan Bronstein of Aurora Gems in New York, who has been pursuing colored diamonds for 25 years, says the hunt has become increasingly challenging. “[Dealing] colored diamonds was sort of an underground business,” he explains. “When I started out, very few diamond dealers even knew about them, and still today, most people don’t understand them.”

Bronstein is among a few elite dealers and retailers who can track down an elusive green or orange diamond, though clients must be patient, because such a search can last for months or even years. The auction houses are a primary source of colored diamonds from estate collections or less-renowned dealers, and some leading jewelers—including Graff, Harry Winston, Vivid, and more recently Tiffany & Co.—are expanding their colored diamond offerings.

Over the past few years, Tiffany’s has amassed a cache of about 100 important colored diamonds that it reserves for particular clients. Among its selection of stones, all of which have been set into rings, are a 2.34-carat vivid orange diamond for $1.06 million, a 1.59-carat emerald-cut purplish red diamond set between two heart-shaped white diamonds for $2.67 million, and a 2.34-carat emerald-cut intense green diamond for $2 million.

“Clients are awestruck when they see these diamonds,” says Melvyn Kirtley, Tiffany’s group vice president and chief gemologist. He presents the diamonds to clients in private meetings or at invitation-only events around the world, where he educates them about the stones’ rarity and beauty. “The combination of color and brilliance of a colored diamond is like no other gem in the world,” Kirtley adds. “It elicits a strong emotional reaction.”