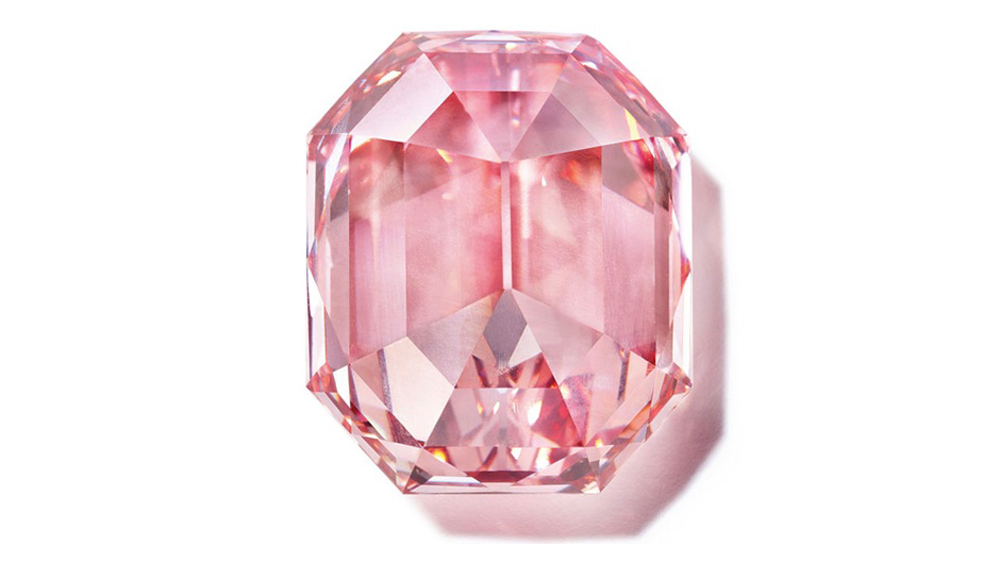 Blink, and you might have missed it. After a brief five minutes of bidding, Christie’s has sold an 18.96-carat Pink Legacy diamond for a record-breaking $50 million—that’s nearly $3 million per carat, the highest per carat price ever paid for any pink diamond. The fancy vivid pink diamond was part of the Magnificent Jewels sale that took place in Geneva today, November 13.

“You have to acknowledge first that the Pink Legacy diamond was a very special diamond,” noted Christie’s international head of jewelry, Rahul Kadakia, in a post-sale statement. “It is one of the best and finest examples of pink diamonds at this size and color and it proved it with a new world record price per carat.” It’s been reported that the gem was purchased by Harry Winston, and will be renamed the Winston Pink Legacy. The rectangular-cut diamond is is the largest and finest example ever offered by the auction house and was estimated to sell for between $30-$50 million. Though its most recent owners have remained anonymous, the diamond was once the property of the Oppenheimer family (known for previously owning diamond company De Beers) and was exhibited in Hong Kong, London, and New York prior to today’s auction. An auction-quality fancy vivid pink diamonds over 10 carats is extraordinary—in the last 250 years, Christie’s has only brought four comparable gems for sale.

“You have to acknowledge first that the Pink Legacy diamond was a very special diamond,”

“To find a diamond of this size with this color is pretty much unreal,” said Kadakia prior to the sale. “The discovery of this previously unrecorded and remarkable diamond (has) caused immense excitement with collectors and connoisseurs of diamonds around the world. Its exceptional provenance will no doubt propel it into a class of its own as one of the world’s greatest diamonds.” The Gemological Institute of America awarded the Pink Legacy the highest diamond color grading of “vivid”—vivid colored diamonds have the most strongly saturated hues. In addition, the Pink Legacy classifies as a Type IIa diamond, which contain little if any nitrogen and account for less than two percent of all gem diamonds.

Jewelry Specialist at Christie’s, Rachel Evans-Omeyer, poses with the Pink Legacy prior to it being auctioned.  Courtesy: REUTERS

“Pink diamonds of any size and depth of color have always had a special allure even amongst knowledgeable industry members,” says GIA executive VP Tom Moses. “The 18.96 carat emerald cut pink diamond is amongst the rarest of all gemstones.”

While all colored diamonds are hot investment items, newly discovered pink diamonds continue to spark intense interest among collectors. In July, mining firm Rio Tinto unveiled a record-breaking vivid pink called the Argyle AlphaTM, which clocks in at 3.14 carats. Attention towards rare pink diamonds has stayed strong in recent years. Looking back to 2017, Sotheby’s sold the 59-carat Pink Star diamond for $72.1 million, the highest price ever paid for a diamond or jewel at auction. Months later, Sotheby’s dropped the hammer for a 33.63-carat fancy light pink diamond for around $12.8 million, setting a new world record for a fancy light pink diamond sold at auction—it calculated out to about $2.6 million per carat. And last November, Christie’s sold a 14.93-carat Fancy Vivid VVS1 pink diamond (dubbed the Pink Promise) for $31,861,000, or approximately $2.13 million per carat.