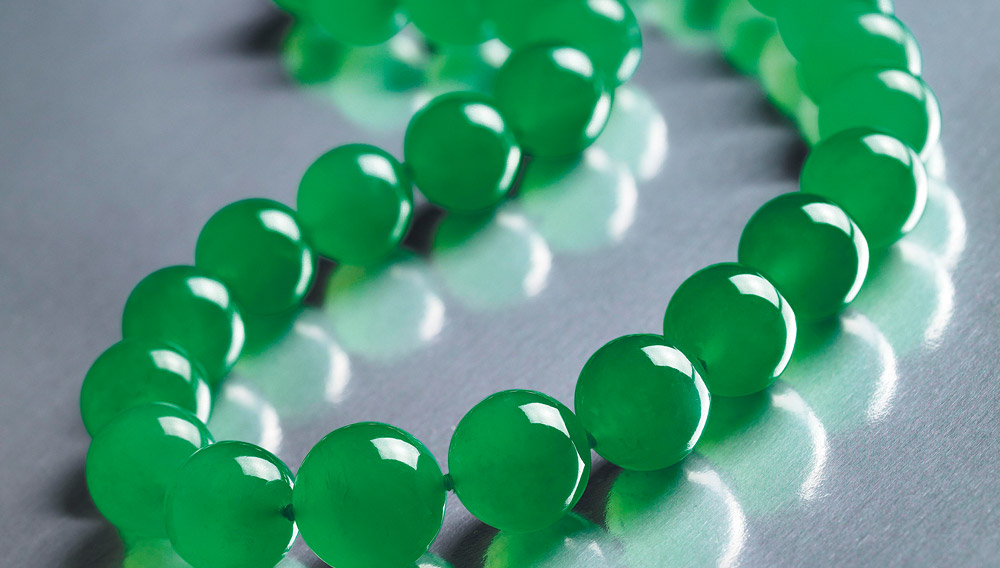 When the Hutton–Mdivani jadeite necklace comes to Sotheby’s Magnificent Jewels and Jadeite sale in Hong Kong on April 7, it is expected to set a new world record for jadeite at auction. Considered the most important known piece of jadeite jewelry, the necklace comprises 27 enormous jadeite beads (15.40 to 19.20 mm in size) of exceptional color and luster. It once belonged to a member of China’s Qing imperial court, and its estimated value is $12.8 million. The necklace, with a Cartier-designed clasp, was given to Barbara Woolworth Hutton by her father on the occasion of her marriage to Alexis Mdivani, and it remained in the possession of the Mdivani family for five decades. Records show that the necklace sold for $2 million in 1988 and again for $4.2 million in 1994, both times setting a world record for the price of jadeite jewelry.

What makes this necklace exceptionally rare is the large size, uniform color, and luster of the beads. For the beads to be perfectly matched, they had to be carved from a single jadeite boulder, and most boulders simply aren’t large enough to yield this number of beads of this size. The average size of top-quality jadeite beads in a necklace is between 5 and 10 mm, making the Hutton–Mdivani necklace an extraordinary example indeed. (www.sothebys.com)