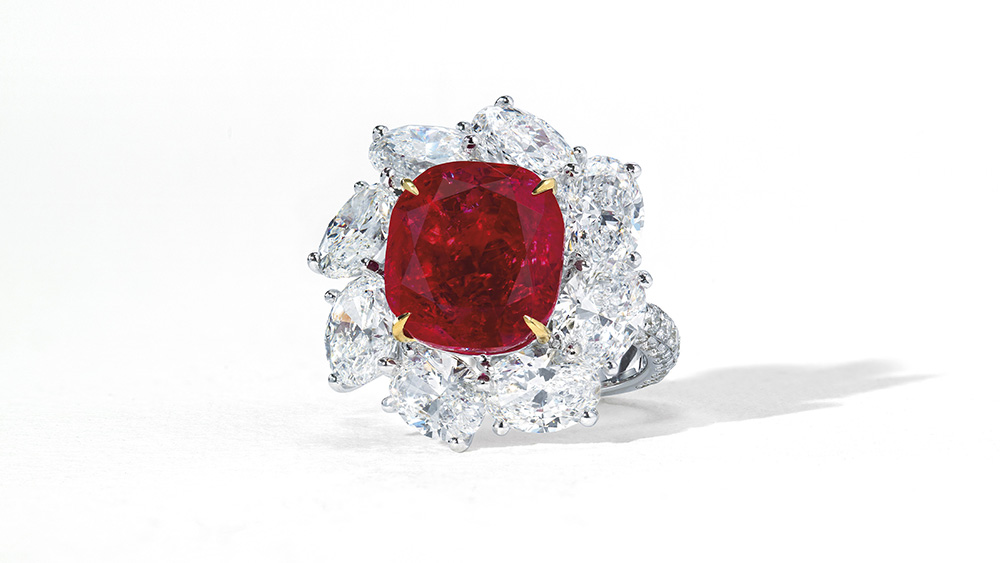 The legendary “pigeon’s blood” ruby is poised to make a giant splash at Christie’s this fall.

Two pieces of high jewelry featuring the exceedingly rare red gemstone will go under the gavel at the Hong Kong Magnificent Jewels auction on November 28. According to the auction house, the rarities are expected to ignite fervent bidding among collectors and fetch in excess of $4 million each.

For the unversed, the pigeon’s blood ruby is the most coveted of all rubies. The moniker, which is believed to have originated in Myanmar, points to the gem’s vivid crimson hue that is said to mirror the blood of a pigeon. Since only perfect rubies of exceptional saturation and natural red fluorescence are awarded this descriptor, pigeon’s blood stones are few and far between. Furthermore, the amount of significant-sized stones coming from the mines of Myanmar has steadily been decreasing. Hence the sky-high estimates accompanying this particular duo.

The pièce de résistance is a striking ring that has a giant pigeon’s blood ruby totaling 8.11 carats at its center, offset by a row of gleaming diamonds. It’s expected to hammer for between $3 million and $4.5 million. The second showstopper is a pair of earrings featuring diamonds and pigeon’s blood rubies weighing 5.19 and 5.03 carats, respectively. This lot is estimated to sell for between $2.9 million and $4.3 million.

Beyond rubies, Christie’s will auction an array of jadeites, Kashmir sapphires and Golconda diamonds. The latter, which hail from the exhausted mines of Golconda, represent less than 2 percent of the world’s gem-quality diamonds and are known for their extraordinary limpidity. Taking the spotlight in this section is a 10.63 carat Golconda diamond ring that is expected to achieve between $1.3 million and $1.9 million. This is complemented by a pair of Golconda diamond earrings totaling 5.10 and 5.02 carats, respectively, which are estimated to sell for between $1 million and $1.5 million.

Clearly, deep pockets are a must for the Magnificent Jewels auction.