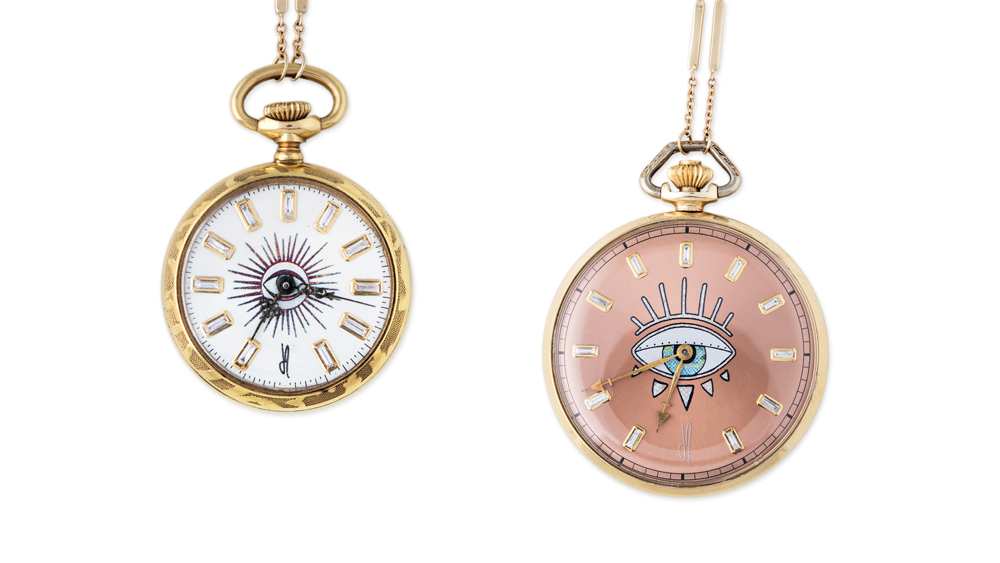 When they were first invented in the early 1500s, pocket watches were all the rage. For the first time ever, men had portable timepieces (the wristwatch would come centuries later, in the 19th century), and the designs quickly became status symbols and style statements for the nattily dressed set. Being able to whip out a timepiece on a chain was a display of au courant sophistication and wealth—plus, the day’s hours could slip by when one was far removed from urban centers and clanging clock towers, so the timepiece served to keep all those trendy tastemakers on schedule. Today, a new collection from Los Angeles–based jewelry designer Jacquie Aiche reimagines the appearance (and audience) for the pocket watch.

Aiche is best known for her signature bohemian designs—think vibrant, chunky turquoise pendants accented with shark teeth, drop earrings made with ammonite fossils, and rings crafted from soul-strengthening crystals. Her designs can make a style statement on their own, but Aiche’s devotees often wear them in layers and stacks.

A pocket watch enthusiast from a young age, Aiche dipped into her own personal collection to create these new one-of-a-kind pendant necklaces. “I thought it was time to turn the pocket watch into a real jewelry piece,” says Aiche, who applies her own boho-chic style to the historic designs by hand-carving inscriptions and detailed evil eyes onto the timepiece’s dial and case.

“The pocket watch is historical and beautiful. They also symbolize the importance of time, which I think is really cool,” says Aiche. Plus, because each 14-karat-gold pocket watch works, they are equal parts eye-catching accessory and convenient piece of functional fashion. “There is something so bossy about wearing this piece. It’s a little extra added oomph to your outfit, and you just got to look down to see what time it is.”