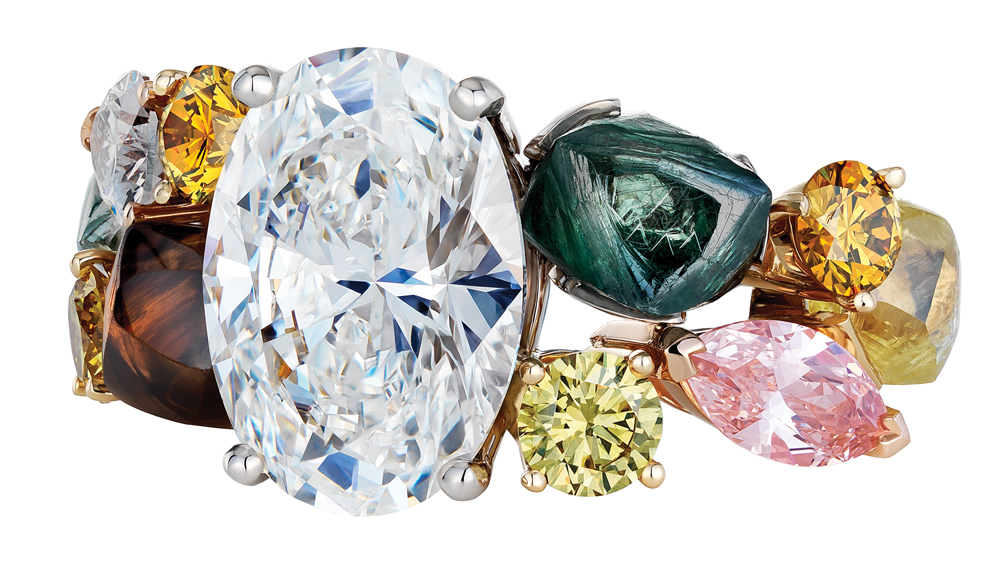 The kind of sensational headlines that, for the past decade, have been associated with multimillion-dollar art transactions are now occurring with notable regularity in the world of diamonds and gemstones. News makers include Laurence Graff, who acquired a $53 million, 1,109-carat uncut diamond in late September, and Christie’s, which announced that this month it will sell a 163-carat D-flawless diamond. The largest ever to come to auction, the Christie’s stone is likely to fetch over $30 million.

These and many other marquee sales have drawn attention to an auction category that was once driven more by insiders than by private collectors. As has happened with fine art, wine, and other categories, well-informed consumers are rapidly recognizing the opportunities inherent in jewelry and, in the process, driving up the prices of an already limited commodity.

Just 10 years ago, a buyer could have bought a vivid blue diamond for $200,000 to $300,000 per carat; today, that same stone is fetching $2 million to $3 million per carat. This tenfold increase in value surpasses the growth rate of the S&P 500 and most real estate markets. And diamonds are not the only stones making news: Christie’s sold a 5-carat Burmese ruby last May for nearly $13 million. The house’s international head of jewelry, Rahul Kadakia, notes that this stone, which is smaller than the average grape, would have sold for a mere $2 million 15 years ago.

Though such swift appreciation often leads to a correction, many of the savviest market experts see no signs of a sell-off. Graff, who has built his brand on an innate ability to spot and secure some of the century’s most valuable diamonds, says interest and buyers continue to grow. “Connoisseurs are learning more and more about stones,” he notes, “and our clients increasingly appreciate that these exceptionally large stones are a natural wonder.” The discovery of gems on the scale of Graff’s recent acquisition is abetted by recent improvements in mining technology, but supplies of new stones, he cautions, remain unreliable. “There are still many months that pass by without discovery of such rare rough diamonds. Ultimately, we can only find what Mother Nature gives us. Extraordinary diamonds are very, very rare.”

Jewelry’s rising value is now outpacing that of classic cars, according to newly released data from the Knight Frank Luxury Investment Index, which tracks the price growth of 10 luxury investment sectors over the past 12 months. Although wine holds the top place in the index, jewelry makes a strong showing. The greatest price gains are being seen with fancy colored diamonds, D-flawless colorless diamonds, Burmese rubies, Colombian emeralds, Kashmir and Ceylon sapphires, select vintage pieces, and certain contemporary designers. While the returns can be significant in this category, collectors should do their homework and only purchase pieces from highly reputable sources with proper documentation from the Gemological Institute of America or another accredited evaluator. A 1-carat vivid blue diamond, for example, can command roughly 10 times more than a light-blue stone of the same size, according to the Fancy Color Research Foundation, whose recent figures show that between 2006 and 2014, blue, pink, and yellow diamonds experienced an average appreciation of 154.7 percent.

“Twenty-five to 30 years ago, a colored diamond was considered a flaw, and people only wanted the whitest stones,” says Alisa Moussaieff, whose London shop has been a consistent source of top-quality jewelry for more than five decades. “Over the years, people recognized the beauty and rarity of these stones. If you bought wisely 10 or 20 years ago, you could expect a colored diamond to be worth 10 times that amount today.” In response to current demand, Moussaieff continually scours the market for colored diamonds, but she says she is lucky to locate a single vivid blue diamond in a year. With such gems, she says, “You don’t overdesign it; the stone is the leading piece of the puzzle.”

High-profile events such as Sotheby’s 2015 record-​breaking sale of the Blue Moon of Josephine, a 12-carat vivid blue stone that sold for approximately $48.4 million ($4 million per carat), have been a factor in attracting wider interest to the category. “You can have this phenomenon when something gets a huge amount of publicity, and it becomes an even rarer object of desire,” says David Bennett, Sotheby’s worldwide chairman of international jewelry and the chairman of Sotheby’s Switzerland. “That is what happened to colored diamonds.” Yet more than perception contributes to these stones’ valuations: “Blue diamonds are incredibly rare and principally from one, very restricted source—the Cullinan mine.”

Like their blue siblings, pink diamonds have only one consistent source: the Argyle mine in Australia, which is expected to be depleted around 2020—a circumstance that has pushed prices upward. The most expensive gem ever sold at auction was the Pink Star, a 59.60-carat fancy vivid pink flawless diamond that brought in a little over $71.1 million at Sotheby’s Hong Kong in April. Once curiosities, stones such as this—along with very rare red diamonds—have shown sufficiently consistent appreciation and liquidity to make them secure investments.

Fancy colored diamonds are prized for the saturation of their hues, while colorless stones are rated according to clarity and size. By this latter standard, de Grisogono’s 163-carat D-flawless diamond, which is coming up for sale in Geneva on November 14, should be a highly coveted lot. “It’s the largest D-flawless diamond ever at auction by more than 50 carats,” says Christie’s Kadakia. “It’s a once-in-a-lifetime,” observes Lisa Klein, who, with her husband, David Klein, owns DLK, which manages de Grisogono’s business in North America. “When we saw the rough, we knew this was a spectacular find; it was whiter than white.” The 404-carat uncut stone was uncovered in February 2016 in Angola’s Lulo mine, and after careful analysis, a team of 10 highly skilled diamond cutters cleaved and polished it. To showcase the gem, de Grisogono founder Fawaz Gruosi created an elaborate necklace of diamonds and emeralds. “It’s a fabulous, classic emerald cut with a lot of grace and charm,” says Kadakia, who expects the sale to realize “well over $30 million.”

Perfect diamonds in the 20-, 40-, and 50-carat ranges continue to see rising demand, according to Kadakia, who compares them to art. “As you build a collection,” he says, “you want the next big piece of art—or stone.” Colorless stones, he adds, have an investment advantage over their colored counterparts: A blue diamond might appear blue to one person and bluish-gray to another, so a certain subjectivity is introduced to the evaluation process; the standards of quality for colorless stones, on the other hand, remain fairly objective. “You can sell a D-flawless stone on paper without even seeing it,” says Kadakia. “Always buy the best stone in your budget, and the day you go to sell, there is no explaining needed.”

Kadakia suggests investing in such “blue-chip” gems as diamonds, Colombian emeralds, Burmese rubies, Kashmir sapphires, and natural pearls. As far as vintage designs are concerned, he likes pieces from the Art Deco period, preferably ones from the great houses, which include Boucheron, Bulgari, Van Cleef & Arpels, Cartier, and Belperron.

Colored gemstones present a more nuanced proposition than either diamonds or finished pieces. Grading guidelines for these stones are not as clearly delineated as those for diamonds, making precise values difficult to establish—although stones from historic sources, such as Colombia, Burma, and Kashmir, outperform those without prestigious provenance. Sotheby’s obtained the highest price ever paid for a ruby when it sold the Sunrise, a 25-carat Burmese set in a Cartier ring, for just over $30 million in 2015. “Nobody dreamed a ruby could make $30 million. Then suddenly an exceptional stone comes on the market, and everything changed,” says Bennett. “You could spend your entire career in jewelry and never see a top-quality, 10-carat ruby.”

Rubies, emeralds, and sapphires come from many locales today, but the heritage sources mentioned above are still the most desirable. “Historical localities that have been written about and known for centuries are the bar by which everything else is measured and the standard of beauty, and thus [a stone from one of these places] commands a premium,” explains Robert Weldon, director of the Gemological Institute of America’s Richard T. Liddicoat Gemological Library and Information Center. He likens the subtle distinctions of these sources to grand crus in viticulture. “You could have the same grape, but it will have a slightly different quality because of where it is grown,” he explains. Geological conditions dramatically influence a stone’s characteristics, as in the case of a Kashmir sapphire, which, Weldon says, has “distinctive reflective inclusions that give it an inner velvety haziness, diffuse the color, and make it especially appealing.”

Still, many Mozambique rubies and Zambian emeralds exhibit a level of quality that rivals that of examples from the legacy mines. Over time, as buyers better understand and appreciate stones from newer sources and older mines become depleted, the value of exceptional specimens will climb. “The beauty is the remarkable element in jewelry,” says Melvyn Kirtley, Tiffany’s chief gemologist and vice president of high jewelry. “Once our clients understand the Mozambique ruby—its beauty and qualities—they are quite amazed.” Sotheby’s Bennett regards rubies from Mozambique and Madagascar as potential investment opportunities, noting that they “are probably undervalued to a certain extent.”

The more adventurous investors sometimes stray even farther from convention by exploring lesser-known gemstones from remote sources around the globe. These mineral treasures offer an element of discovery for buyers in search of something unique, and purchasing a Paraíba tourmaline or spinel can result in a big payoff. “Sometimes a new mine discovery can increase the value of stones,” says Weldon, pointing out that the spinel mine in Tanzania changed the marketplace dynamics when it opened 10 years ago. “All of the sudden, spinel was on the map, and people became aware of it.” Other desirable stones include alexandrite, tsavorite, and fire opal—though the precise values of these gems can be challenging to establish thanks to fluctuating supply and demand.

Another emerging category consists of high-end contemporary designers whose one-of-a-kind pieces are compared to collectible art. These items are being collected the way people collect contemporary art or sculpture, notes Jean Ghika, Bonhams’ director of jewelry in the United Kingdom and Europe, who cites the postwar-era work of Andrew Grima as an example. Ghika adds that pieces by designers for the large brands—including Angela Cummings for Tiffany’s and Aldo Cipullo for Cartier—are also highly sought after. Christie’s Kadakia favors Bhagat, Edmond Chin, Michelle Ong, Hemmerle, and James de Givenchy for Taffin.

Of course, as with all passion-driven investments, the returns for buyers of fine jewelry go well beyond any increases in monetary value. Most jewels are given as tokens of affection or as mementos of important events. “The primary reason someone purchases a piece,” says Ghika, “is because they want to wear it; they love it, and it becomes part of their style. The investment value is a sidebar.”

All the same, most of us would likely agree that a stone seems to shine brighter when we know it’s increasing in value.