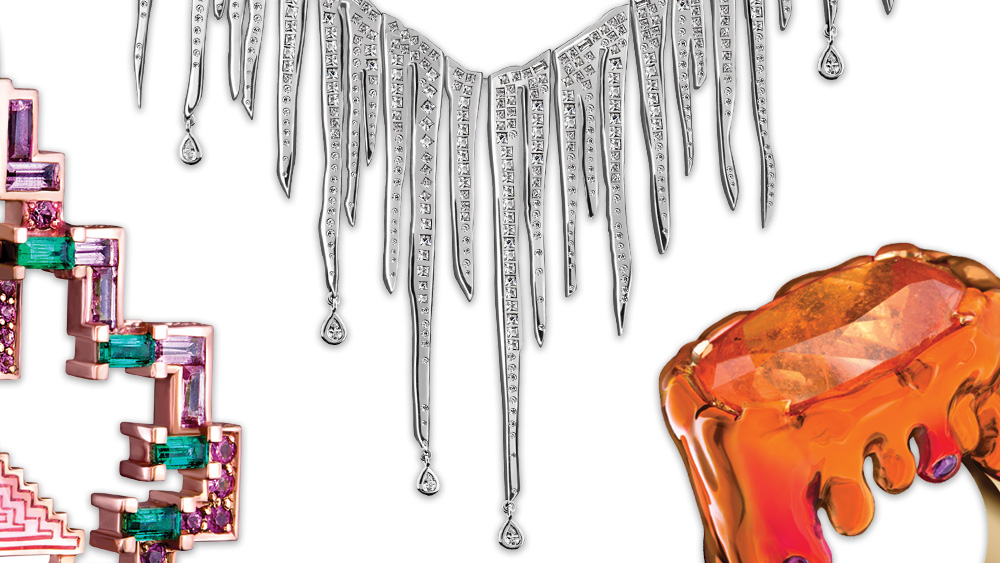 Solange Azagury-Partridge’s creativity seemingly knows no bounds—and she has applied her considerable imagination and love of color to her latest collection, Supernature. The London jeweler was initially inspired by an out-of-print Lyle Watson book of the same name that reveals “mind-blowing facts about the universe from the lunar cycle to cycadian rhythms to tidal patterns,” which she keeps by her bedside. “I thought, let me try and translate those facts into jewelry,” she said.

Basing her designs on each of the five ancient classical elements—Fire, Air, Water, Earth and Aether—the result is classic Solange: full of color, exquisite craftsmanship, and tongue-in-cheek humor.

The accompanying Storm ring—one of Solange’s favorite pieces in the collection—centers on a sparkling hunk of raw diamond, also set with diamond lightning bolts that stretch around the shank.

Icy stalactites of diamonds in white gold represent Water in an equally dramatic necklace and single earrings, while a beautifully iridescent golden South Sea pearl emerges from the curves of engraved gold waves in a cocktail ring. “It’s like Botticelli’s Venus rising out of the water,” she says.

Meanwhile, the ethereal element of Aether—the mysterious essence that links earth to the gods and the heavens—is represented by earrings depicting the architectural blueprints of places of worship like the Notre-Dame cathedral and a Mayan temple.

The Mayan earrings share the same bubblegum pink and emerald color scheme as Solange’s West London showroom. Behind its discreetly dark exterior and stained-glass windows, lies a cacophony of color, detail and texture.

From its rainbow carpet to its green velvet sofas to the walls of her office, which are lined with antique Indonesian wood panels depicting tropical scenes highlighted in neon colors, it is the perfect location for losing oneself in Solange’s joyful and otherworldly creations.