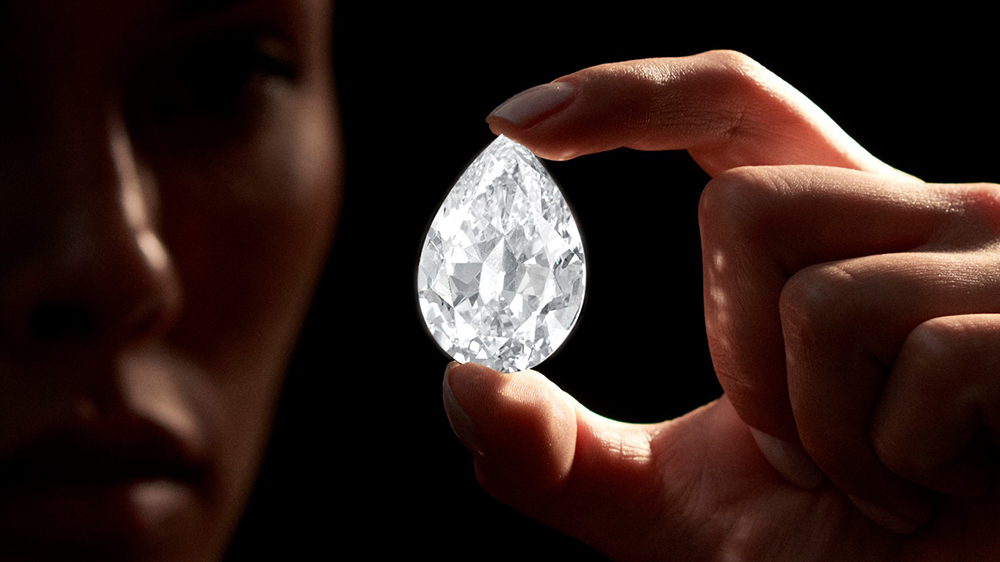 Got a lot of crypto on your Ledger? You can now use it to buy a diamond larger than one of Queen Elizabeth II’s beloved brooches.

On Monday, Sotheby’s announced that cryptocurrency will be accepted as payment for a rare 101.38-carat pear-shaped D Flawless diamond scheduled to be sold at auction in July. With an estimated value between $10 million and $15 million, the stone—named The Key 10138—is believed to be the most valuable item ever sold for cryptocurrency in a public sale. The pear-shaped diamond will be offered in a single-lot live sale at Sotheby’s Hong Kong on July 9. While you can of course buy the stone with fiat money, you can also exchange Bitcoin or Ethereum for it. All transactions will be facilitated through Coinbase Commerce, one of the world’s largest cryptocurrency exchanges.

An up-close comparison of the diamond to a key.  Sotheby's

The ‘crypto-diamond’ is currently available to view by appointment at Sotheby’s New York. But it will soon head overseas to star in the auction house’s Hong Kong Gallery within a ‘Luxury Edit’ of watches, handbags and more from July 3-8. Named The stone has been graded by the Gemological Institute of America as D Color, Flawless and Type IIa. With no IR-detectable nitrogen or boron impurities, Type IIa diamonds are incredibly rare and represent less than 2 percent of all diamonds mined, according to Sotheby’s. The auction house also claims that the chosen name of the diamond symbolizes “the unlocking of a new era in commerce and technology, and thus is a key to history.”

Sotheby’s is making that point in marketing the sale, comparing The Key 10138 to other notable pear-shaped diamonds that have gained fame throughout history. To wit, there’s the Cullinan I which is the world’s largest colorless cut diamond—weighing a whopping 530 carats. The Cullinan I was widely known as the Great Star of Africa and was mounted in the Imperial Sceptre of Great Britain for King Charles II in 1660. And there’s also the Cullinan III among others, which weighs 94 carats and is frequently worn by Queen Elizabeth as a brooch.

The message? Diamonds with the magnitude of this 101-carat find are usually passed down through royal bloodlines. But with a strong crypto portfolio, you won’t need a title to call this asset your own.

To make an appointment to view The Key 10138 or inquire about bidding, head over to Sotheby’s.com for more information.