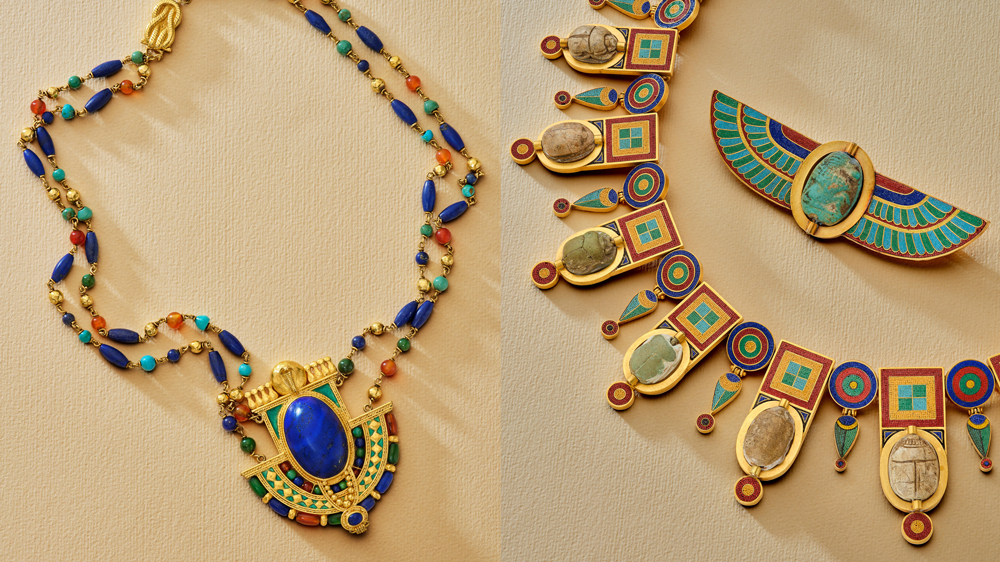 If you’re keen on some high-level holiday shopping this season, Sotheby’s December 7 Magnificent Jewels auction in New York is a good place to start.

The top lot is the Golden Canary Diamond (you know a diamond is important when it has a name), expected to hammer for up to $20 million. On a more arcane note, the sale includes several pieces that represent outstanding examples of Egyptian Revival Art Deco jewelry, many including scarabs (beetle bug shells). And if mythical provenance is your thing, you’ll love the 5-carat emerald ring retrieved from the wreck of a 17th-century Spanish galleon that was lost at sea for four centuries (est. $50,000 to $70,000).

The Golden Canary is a big diamond with a big back story. It’s a dazzling fancy deep brownish-yellow gem weighing 303.10 carats—the largest IF (internally flawless) diamond ever graded by the Gemological Institute of America. It was found in the 1980s in the Democratic Republic of Congo, by a young girl playing in the backyard of her uncle’s house, amongst an unassuming pile of rocks—in rough form, a diamond can look like just another rock. It’s the cutting that brings out its famous brilliance. Apparently, miners from the nearby MIBA diamond mine had considered it too bulky to be a real diamond. The girl gave the 890-carat rough to her uncle, who sold it to local diamond dealers—hopefully for a good price. It was eventually cut into 15 gems, the largest of which is this one. Originally it was given a shield cut, yielding a 404.78-carat gem, but was later cut into the 303.10-carat Golden Canary to release more of the brilliance. Sotheby’s is giving it an estimate of $15 million to $20 million.

The fancy color theme extends to a few other outstanding diamonds in the sale, including two from the De Beers Exceptional Blue collection: one a 3.2-carat fancy vivid blue diamond estimated at $5 million – $8 million; and the other a 2.08-carat fancy intense blue estimated at $1.2 million – $1.5 million. An unusual and very rare gray diamond of 10.67 carats, set in a ring by Hemmerle, is on the block for $1.5 million to $2 million. As for colorless diamonds, a 51.52-carat IF cushion-cut diamond from Harry Winston estimated at $3 million to $5 million is also on the block.

In celebration of the 100th anniversary of the discovery of King Tutankhamun’s tomb, and in tribute to the contribution of ancient Egyptian culture to the modern world, Sotheby’s has assembled a collection of Egyptian-revival jewels by renowned makers, including Castellani, Émile-Dêsire Philippe, F.W. Lawrence, Louis Comfort Tiffany, Lacloche and Verdura. The highlight is a bracelet by Lacloche Frères with rubies, emeralds and sapphires arranged to depict Egyptian scenes against a background of diamonds, estimated at $1 million to $1.5 million. A matching pair of earrings has a high estimate of $500,000. A group of Egyptian revival pieces made in the 1930s by Castellani is also outstanding. The highlight is a steatite and faience (types of scarabs) necklace estimated at $650,000. A matching micro-mosaic brooch has a high estimate of $150,000. Ancient Egyptians considered the scarab to be a sacred symbol of spontaneous regeneration, life and resurrection.

The sale also includes some outstanding examples of the big three: ruby, sapphire and emerald. A 12.23-carat Burmese ruby ring is estimated at $1.2 million to $1.8 million. A 16.46-carat Kashmir sapphire ring is another heavyweight colored stone expected to fetch around $1.6 million, while a 12.64-carat emerald ring has a, relatively speaking, more palatable top estimate of $700,000.

Even if you’re not buying, the auction preview is worth attending for anyone interested in the history of jewelry. It is packed with rarities made by the biggest names in the business from the last century, including Suzanne Belperron, Bulgari, Cartier, Louis Comfort Tiffany, JAR, Oscar Heyman and Graff.

And there are several signed jewels by Van Cleef & Arpels, including its coveted mystery-set pieces. As Sotheby’s puts it: “Van Cleef’s mystery settings are the ultimate in haute joaillerie, and a requirement for anyone wishing to have the complete canon of jewelry design.”

Christie’s Is Selling Another Rare Pink Diamond Next Month. This One Could Fetch Up to $35 Million.