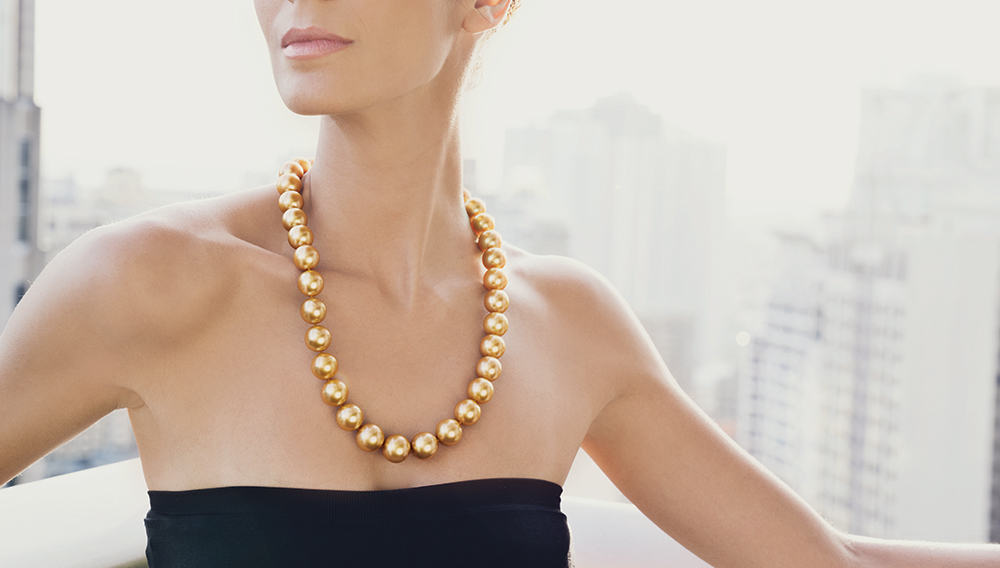 It took 37 years to assemble the collection of 35 perfectly matched large golden South Sea pearls for this newly unveiled necklace by Jewelmer Joaillerie, the world’s premiere source for golden pearls. The golden South Sea pearl is among the rarest pearl species because a single pearl requires pristine marine environments, numerous steps, and a minimum of five years to grow in the gold-lipped Pinctada maxima, the world’s largest species of mother-of-pearl oysters. And still, there is no guarantee a top-quality, flawless, large pearl will emerge after five years of development.

“It requires 377 steps and five years to see if a single pearl, normally in the size of 10 to 13 mm, would emerge from its mother oyster,” explains Jacques Christophe Branellec, Jewelmer’s executive vice president and deputy CEO. His family’s extensive pearl farm is located in the pristine waters of Palawan. This strand, he says, consists of 35 gem-quality round, golden South Sea pearls in sizes from 16 to 18 mm.  “On the rarest occasions, a pearl emerges in the exceptional size of 16 to 18 mm, with a flawless surface and a perfect round form.” That is why his team had to search for 37 years to find this many matching pearls of similar size, color, luster, and flawless finish to create this single strand.

“Palawan is one of the most sensitive marine environments in the world,” says Branellec. “It’s the center of biodiversity.” While the company’s Palawan farm continues to produce top-quality golden South Sea pearls, many of which are used in its own Jewelmer jewelry collection, it doesn’t expect to build another strand of this quality anytime soon. “There is no guarantee that we will be able to produce a second strand of a similar caliber, what with the ongoing issues of global warming and climate change. The production of a pearl is heavily reliant on nature. This is why the Palawan strand is highly symbolic: It is an indication of a pure environment and an achievement of man working in harmony with nature.” (jewelmer.com)