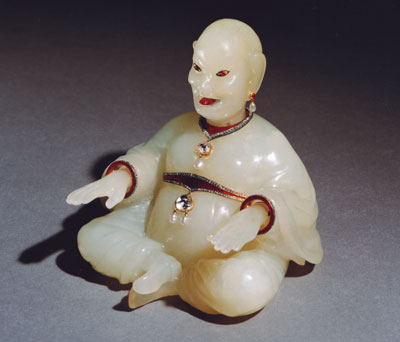 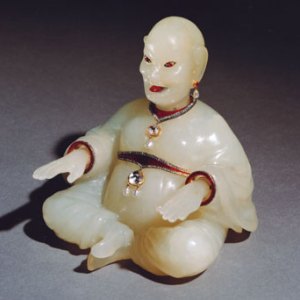 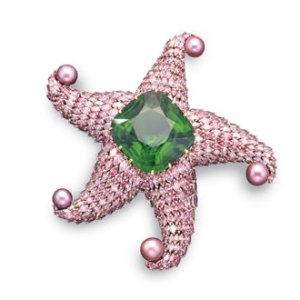 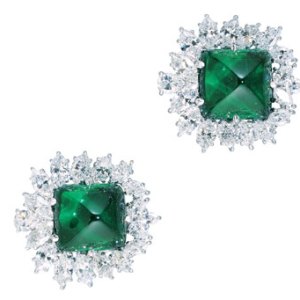 Ralph Esmerian adeptly maneuvers around the piles of papers, boxes, and books that cover virtually every surface in his office in Manhattan’s Rockefeller Center. Even beneath his desk, dish towels conceal stacks of trays laden with jeweled antique handbags and objects d’art. Unfazed by the clutter, Esmerian delights in presenting his favorite treasures, which include a hand-carved, jeweled bowenite Magot created by Peter Carl Fabergé, one of three that Fabergé made between 1903 and 1915. The chinoiserie piece, valued at $6 million, depicts a jovial Buddha-like character, whose jeweled arms and head flail up and down, much like the head of a bobble-head doll does. “It has a marvelous kind of whimsy, charm, and spirit,” says Esmerian, who acquired the Magot 23 years ago from renowned Fabergé authority Kenneth Snowman of London, “and it’s brilliantly engineered.”

Over the course of his 42-year career, Esmerian has bought and sold original Fabergé creations, jewels from the French Crown, and highly coveted Cartier and Lalique pieces. Rather than promote his rare finds directly to the public, the fourth-generation jeweler has built his business behind the scenes, dealing exclusively with the trade. As a collector himself, he frequently loans pieces for museum exhibitions, but prefers to remain anonymous when he does so.

However, last April, Esmerian purchased—in partnership with Merrill Lynch’s Global Asset Based Finance Group—the high-profile estate jewelry company Fred Leighton, through which he now offers his vast collection of gemstones, jewelry, and objects d’art. He may even part with his prized Magot if the terms are acceptable. “I’m the end of the line,” says the 66-year-old, whose tall, powerful frame and shock of white hair lend him a regal appearance. “I need to get these things out into the world.”

His reserve comprises an eclectic mix of more than 18,000 estate jewelry designs and gems, in addition to what he calls his “family collection” of about 100 museum-worthy jewels and objects d’art that his father, Raphael, began acquiring 75 years earlier. “I’ve been spoiled,” says Esmerian. “My father introduced me to the highest-quality stones and jewels in the market, and I have a sense of what I think a great emerald or ruby should be. It takes quite a bit to grab me.” Among his rare pieces now available for purchase are a 14-carat intense pink emerald-cut diamond valued at about $1 million per carat, and a 17-carat Colombian emerald ring for $1.5 million.

Some of Esmerian’s stones have amusing provenances. A dealer, he says, once brought his father a 17-carat Colombian cabochon-cut emerald, which at the time was worth about $200,000. Raphael turned him away because he did not care for the man, who subsequently sold the gem to another dealer. The following day, the new owner offered the stone, at double the price, to Raphael, who snapped it up immediately. “My father told me he couldn’t sleep all night thinking about the stone,” says Esmerian. “It was the most beautiful he had ever seen.” After many years of searching, Esmerian found a closely matching emerald to create a pair of earrings that he said is worth $2.5 million; he has held them for sentimental reasons until now.

Because he has no heirs to inherit his business and its assets, Esmerian has decided to divest his cache of jewels. Among his favorites that he pulls from the office safe is a vibrant, intensely sparkling Montana sapphire and diamond butterfly brooch made by Joel Arthur Rosenthal, the American jewelry designer behind the JAR collection of Paris. Esmerian purchased the piece in 1987, a few years before the jeweler gained his fame. “I held onto this piece because of its sheer beauty,” he explains. “Every generation has a leading jeweler on the world stage. For the past 20 years, JAR stands out as the best jeweler in terms of design and craftsmanship.” He points to Tiffany & Co. and Van Cleef & Arpels as jewelry houses that had “their moments in the sun,” but he believes that Cartier has been the best all-around jeweler over the past 200 years.

Esmerian’s fervor for jewels, however, does not detract from his business acumen. Over the years, he has held back pieces, anticipating that the demand for rare gems and jewelry would escalate. He predicts it will continue to rise. “Jewelry as a decorative art is undervalued,” Esmerian says. “The best jewelry pieces ever sold barely reach $15 million, while a great piece of art can be well over $100 million.” In comparison to art, he points out, jewelry is wearable, often older, and has intrinsic value in its components.Esmerian’s discreet, discriminating manner is in sharp contrast to that of Fred Leighton, the former owner of eponymous boutiques on Madison Avenue and in Las Vegas’ Bellagio hotel. Leighton, an unabashed marketer, gained prominence over the past two decades for adorning Hollywood’s A-list celebrities in vintage jewels. When they first met in the 1970s, Esmerian appreciated Leighton’s audacity. “Fred was so out of whack with the rest of the fine jewelry retailers,” he recalls. “He had no training or background, but a true passion for jewelry.”

The appreciation is mutual: Leighton credits Esmerian with jump-starting his Madison Avenue business. “Ralph was the first dealer to give me important pieces on consignment 30 years ago,” he recalls. “He gave me a window full of Art Deco jewels; at the time, I couldn’t afford those kinds of pieces.” With his 75th birthday on the horizon, Leighton decided it was time to sell his company and put some money in the bank. “In this business, if you’re passionate like I am,” he says, “you never have a dime because you’re always buying more jewelry.”

Esmerian is enhancing the Fred Leighton offerings with his vintage treasures and a limited number of newly created jewelry designs. He continuously has drawn on his cache of gems to create about 20 new pieces annually, and he intends to expand the practice for the Fred Leighton boutiques. Esmerian’s original pieces include an elaborate colored diamond butterfly brooch and a ring with an emerald that is flanked by two canary yellow diamonds, in addition to an azurite bead necklace and other fashionable pieces.

Esmerian is the last in his family’s long line of jewelers; his great-grandfather, a lapidary in Constantinople beginning in the late 1880s, was the first. He passed along the trade to his son, who in turn initiated Esmerian’s father, Raphael. Around 1940, after a stint in Paris, Raphael moved to New York City, where he established a colored gemstone business. Shortly thereafter, Stanley Marcus, son of the founder of Neiman Marcus, asked him to produce a collection for the store’s first fine jewelry department.

“My father showed me how to look at things, and suddenly I was awakened,” says Esmerian, who joined the family business in 1964 and worked at Raphael’s side for 13 years until Raphael’s death. “Different stones have different character, just like people do,” he adds. “But human beings can bore you stiff sometimes, while a great stone speaks volumes.”