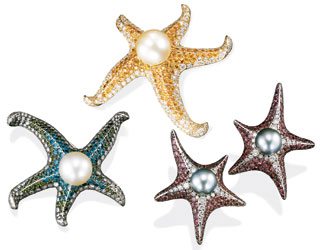 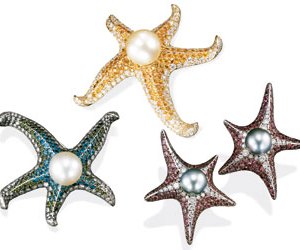 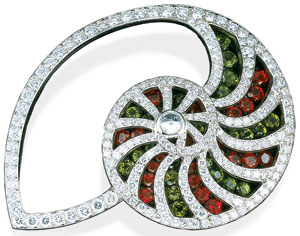 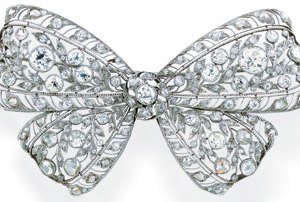 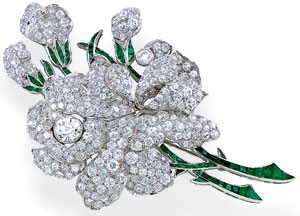 Over the past 25 years, estate jeweler Martin Katz has acquired some of the world’s finest examples of period jewelry. In his continual hunt for an elusive Edwardian diamond engagement ring or an 18th-century Cartier sautoir necklace, however, he has discovered that the demand for beautiful period jewelry has begun to outweigh the supply.

These days, Katz does not spend as much of his time chasing down estate sales and auctions in search of rare, desirable period pieces. Instead, he channels his passion for vintage style and craftsmanship into producing his own signature jewelry designs. His eponymous contemporary collection echoes an earlier era but is undeniably timely and chic.

Like Katz, leading estate jewelry dealers Neil Lane and Stephen Russell have also begun designing and producing distinctive jewelry collections that exude vintage flair. No longer limited by what is available in the resale market, these jewelers are enhancing their vintage offerings with fresh designs that entice a younger generation of women. At the same time, they are creating a new generation of collectibles.

A determined Martin Katz recently completed an elaborate ribbon brooch, which is composed of 1,400 diamonds set in 20 platinum strands loosely knotted in a bow design. The piece took three years to complete. “Everyone said the brooch was technically impossible to create,” Katz says with a satisfied grin. “I wanted the design to appear effortless, delicate, and feminine—just as though someone loosely tied this diamond ribbon.”

The brooch, which recently sold for an undisclosed sum, is a prime example of the designer’s zeal for old-world craftsmanship. Katz oversaw every detail of the piece, a process that involved making several trips to the Parisian atelier where it was made.

“My jewelry is contemporary but with an old soul,” says Katz, who has boutiques in Beverly Hills and New York. “It’s influenced by the past but is clearly not reproduction.” Katz says his work is identifiable by its apparent absence of metal, an effect achieved by using a technique he calls “micro-pavé.” Small diamonds are set extremely close together to cover virtually all the metal. He also reveals a sense of whimsy in his jewelry through colorful sea-life motifs and three-dimensional floral designs in various stages of bloom.

Katz’s overriding motivation, he emphasizes, is to create diamond jewelry that is both wearable and relevant. The diamond rope chain, he says, is an example of diamond jewels that go as well with an evening gown as with a pair of jeans. The elongated necklace comprises 140 one-carat diamonds set in a 3-foot-long platinum chain that can be draped several times around the neck in a variety of styles. Each signature design is crafted in one of several small ateliers in Europe and is signed and numbered.

Katz’s original designs are already appearing at auction, and like coveted vintage designs, they are garnering top dollar. At a Christie’s auction in 2002, an octopus brooch set with vivid blue Paraiba tourmalines, sparkling green tsavorites, and pink sapphires drew a high bid of $39,000. The brooch originally sold for $22,000 just a few years earlier.

For more than 20 years, from behind the counter of his small shop on Beverly Boulevard in Los Angeles, Neil Lane has advised a loyal following of celebrities and socialites on their jewelry acquisitions. While his specialty may be discovering distinct, fashionable period jewelry, Lane increasingly has been creating custom designs for his clientele.

“Most jewelry is boring and lacking anything meaningful,” says the personable and chatty Lane. “I have a certain Karma connection to jewelry. All these years, I’ve bought and collected pieces for their beauty, meaning, and relevance. My clients want this kind of connection with their jewels.” Through his long-term relationships with his patrons, he has observed that women want jewelry that has both symbolic and heirloom qualities. In response, he created his first extensive jewelry collection, which is defined by inspirational and representational pieces.

A common element of his designs is the use of symbolic, nature-inspired motifs. “At the turn of the 20th century,” explains Lane, “important jewelry symbols were salamanders [power], serpents [eternity], and butterflies [rebirth]. These items were made for their symbolism and beauty, not fashion.”

In addition to these emblematic figures, his first collection includes a breadth of designs, from feminine and delicate Edwardian-inspired diamond floral earrings and barrettes to bold Art Deco–style diamond and onyx ball-shape pendants and drop earrings. Lane has created a wide range of elegant engagement rings and wedding bands combining white and fancy colored diamonds in antique cushion and rose cuts. “I also want to portray that sexy and glamorous attitude in jewelry that is so apparent in many older designs,” says Lane.

“Jewelry is about much more than fashion,” he adds. “Jewelry is one accessory that has a soul and can be passed down with all its meaning to the next generation.”

Russell Zelenetz has never found it so challenging to find exceptional period pieces. Period jewelry—once considered passé—has assumed a glamorous and fashionable image, he explains. Increasingly, a younger generation of stylish women is turning to vintage designs, expressing their individualism with distinctive pieces, such as exotic and colorful Mogul-period Indian earrings or a refined Edwardian sautoir.

“There is simply a finite source of beautiful period designs,” says Zelenetz, who, with business partner Stephen Feuerman, owns the Stephen Russell boutique on Madison Avenue in New York City. The limited supply of vintage pieces prompted him to create more of his own jewelry, which is made mainly in Manhattan in small workshops.

Still, Zelenetz says, designing and making jewelry is as challenging as locating that period treasure. “It’s hard finding stones with the quality and size that we want for our designs, and it takes a lot of patience and time to have these pieces made.” After spending 20 years cultivating clients and educating them about craftsmanship and execution, says Zelenetz, “our own collection must be made with the same integrity of design and quality as period pieces. Our clients expect nothing less.”

Among his prized creations is a recently completed ring with a table-cut D-flawless diamond that looks like a pool of water. This rare cut requires a specific type of rough stone. It took more than four months to cut the diamond, which has a flat surface and virtually no depth, and set it in a ring. The piece sold within a week of debuting in the boutique.

Zelenetz’s Mogul-inspired large diamond drop earrings, in which the diamonds appear to be floating in air, are another sought-after design. One such pair features six diamonds with a total weight of 17 carats. Another unique creation is a simple platinum ring set with an 18-carat natural sapphire. The minimal setting highlights the beauty of the sea-blue stone centerpiece of this ring.

Zelenetz goes to great lengths to make his jewelry designs appear simple, as though they were effortlessly made. But looks can be deceiving. Sometimes, such refined and understated designs can be more difficult to execute than a fanciful creation.