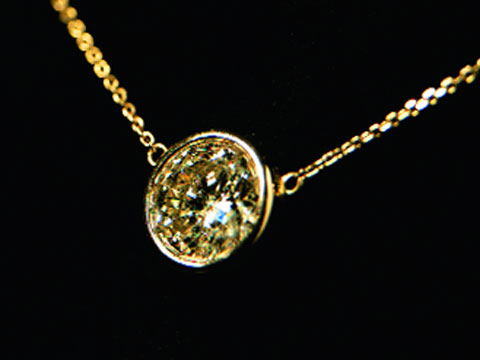 In the silk-upholstered lobby of the Peninsula Beverly Hills hotel, actor/director Lou Diamond Phillips and his wife, Kelly, are sipping tea and talking diamonds. The topic is courtesy of their companions, Mitch Edwards and Pericles Rellas of the Beverly Hills jewelry design house Edwards & Rellas, who have come to high tea equipped with a jeweler’s loupe, a notepad, and a few diamond-and-platinum jewels that Edwards keeps pulling from his jacket pockets.

As specialists in custom design and refashioning of vintage jewels, Edwards and Rellas frequently conduct their business in living rooms and well-appointed restaurants throughout Southern California, operating more like business consultants than jewelry designers. Clients come to them through word of mouth, bringing cracked brooches, outdated dinner rings, and inherited necklaces, hoping to salvage the gems and remake the pieces into creations that are uniquely theirs.

Commissioning a custom design is the ultimate coup for anyone who wants a truly one-of-a-kind piece of jewelry. Edwards & Rellas and other custom jewelry designers are developing this niche by emphasizing extremely personal service and drawing their creative inspiration from the client to fashion unique heirlooms for future generations.

Kelly and Lou had heard about Edwards and Rellas in the usual way: socially. They had attended parties and events where they had seen some of Edwards’ designs, including a pearl necklace with a stunning aquamarine drop set in pavé diamonds. “That particular client had come to see us with a plastic baggie of pearls and diamonds and this 25-carat aqua,” says Rellas, who heads marketing and operations. The designs inspired Kelly to take another look at a white elephant jewel of her own.

From a blue Tiffany bag, Kelly shakes out a small, simple, gold-and-diamond pendant. The 3.5-carat diamond, set into a plain gold bezel setting, was in its third incarnation as a piece of jewelry, none of which Kelly had found wearable. “This was in my mother’s engagement ring,” Kelly explains of the diamond, which she inherited when she was only 15. Kelly’s father had bought the stone loose in New York City’s diamond district 40 years earlier, where he had it set into a four-prong, white gold Tiffany-style engagement ring for her mother.

Twenty years later, shortly before her death, Kelly’s mother had the diamond refashioned in late-1970s style, with a four-prong thick gold band that reached to the knuckle. Kelly says the bold ring had looked great on her statuesque mother. “She was tall and elegant and carried it well,” she explains. It didn’t, however, suit Kelly, a delicately featured, soft-spoken former fashion model.

The bezel-set pendant that lay before them represented Kelly’s own attempt to remake the jewel—but that too had its problems: The stone, which was not set properly, scratched her throat, and the heavy gold setting had not aged well. After a while, the diamond, in its bezel prison, had ended up in a drawer.

As she passes the pendant to Edwards, Kelly explains that she would like the stone set into a platinum ring. The challenge, she says, is that the ring needs to suit her own soft, somewhat romantic style while also honoring her mother’s stately taste. “Something classic and elegant,” says Kelly. “Less is more,” she adds, “but not always.”

Edwards laughs. “Okay, throw me for a loop,” he says. Before checking the stone, he first casts a glance at the jewelry Kelly is wearing: a Tiffany platinum-and-diamond cross pendant and a diamond wedding band and engagement ring. She points out that each piece has sentimental significance. Her platinum engagement ring (an emerald-cut two-carat diamond flanked by emeralds) features two full-carat diamonds that Lou added when the couple’s twin girls were born. Kelly notes that at home she has a four-carat heart-shaped estate diamond ring that was a gift from Lou to celebrate the birth of their youngest daughter, Lili.

Designing a complementary ring may appear to be a simple matter—until Edwards takes a closer look at the stone. “This is a European cut,” he says, examining the diamond through his loupe. “It’s an antique stone.” Most likely, he says, the old “Euro”—which features fewer facets and a smaller table than a brilliant-cut diamond of today—was hand-cut in the early 1900s. Originally, it was probably set in an intricate eight-to-12-prong platinum ring with some openwork and tiny textured beads, called “milligraining,” on the band. According to Edwards, any new setting should not only combine Kelly’s style with her mother’s tastes, it should also reflect the diamond’s authentic origins.

At this point, Edwards pulls out his sketch pad. “I definitely don’t see the ring as something contemporary,” he says, sketching. That means no wide shiny band, no trendy engraving, no sleek stylings, and no four-prong setting. “I think we can do something with authentic craftsmanship, something that is more finely wrought, that speaks to the genesis of the diamond itself. It would become a modern antique.”

Since Kelly prefers a solitaire setting, Edwards proposes creating intricacy through beaded metal and a pavé-set diamond band. He pulls a platinum-and-diamond necklace from his jacket pocket, showing Kelly how tiny metal beads are hand-hammered around the pavé diamonds. “Beaded prongs could hold in your stone so the setting looks slightly square,” he says. “It’s clean and simple, and the beading adds just a little something to it. And then you could have little diamonds”—he runs a finger along the necklace’s sparkling river of stones—“in the surrounding band.”

“I do like the beading,” Kelly says, examining the necklace. She then picks up a picture of an Edwards & Rellas Tahitian pearl drop pendant crowned with a glittering pavé diamond cone. “I also like the look of having a stone with a pavé band,” she says. (Click image to enlarge)

Edwards agrees: The close-set smaller diamonds would “pull the ring together” so that the large stone would not jut out. He notes, though, that Kelly’s band would not have a modern pavé setting, in which the diamonds sit flat on the metal surface. Rather, the band’s small diamonds would be hand-set 1920s style, into an open channel with the surrounding metal hammered into small beads.

“Everything starts with a doodle,” says Edwards, as he jots down more notes. “We’ll put down several combinations and see which way we’re going to go with it.”

Back at his studio, Edwards hand-paints the first of three designs—and it is the one he is certain Kelly will prefer. Minutely rendered in oils and watercolors on charcoal paper, it features the solo diamond held in place by six U-shaped prongs. Around the platinum band is a pavé setting of 30 2.5-point round diamonds, with milligraining along the band’s edge.

His next two designs, he says, will give Kelly different stylistic options. One is dressier with two 8-point round diamonds flanking the center stone, which sits in an angular beaded setting that creates the illusion of a square diamond. A third design plays more to Kelly’s preference for the clean, soft curves of her larger rings. In it, two half-carat pear-shaped diamonds, on a plain polished band, embrace the main stone, popping like flashbulbs on the dark page. “This is a 1940s style, simple and clean,” Edwards points out.

Six weeks after the first meeting, as Rellas pours coffee in the sitting room of his Los Angeles home, Kelly and Lou both light up at the life-size oil renderings. At first Kelly is drawn to the third design with the pear-cuts. “I like this,” she says. After a moment, though, she picks up the first rendering, the solitaire supported by its sparkling orchestra of diamonds and beading. “But I love this. This is what I had pictured in my mind. It’s so much more about the stone, for me.”

“From the moment Kelly and Lou left the Peninsula, I knew we would make that first design,” Edwards says later. “Clients like Kelly pretty clearly give me an accurate description of what they want, even if they don’t articulate it. I can look at a client and get a sense of who they are.”

The final task is to turn the sketch into reality. Though a simple design, the ring presents a complex manufacturing dilemma: balancing the delicacy of a thin band with the necessary strength to secure a relatively large stone.

As Edwards and Rellas work with their Los Angeles manufacturer, who specializes in hand-tooling intricate platinum pieces, several challenges arise. Because Kelly wants the band as thin as possible, Edwards needs to refashion the original buttercup setting into a traditional basket, which allows for the use of thicker prongs. Otherwise, the individual prongs may have proven too delicate for the stone and the basket would have overpowered the thin band and flopped around on Kelly’s hand.

Other revisions are made as well. Initially, Edwards wanted to use old European-cut diamonds for the smaller stones to complement Kelly’s antique stone. But the large stone, with its smaller table, fewer facets, and imperfections, already has significantly less flash than a modern stone. “Adding even flawless 2-point Euros would have given the ring no sparkle,” says Edwards. So they select modern 2.5-point brilliants instead.

With the design finalized, Edwards & Rellas’ manufacturer constructs the ring’s band, which is cut from a length of 3.3-millimeter-thick platinum rod and hand-filed to give it a delicate roundness. Hand-drilled holes hold the band’s small stones, which are then secured by hammering the metal into beads around each stone’s edge. Finally, a mallet and fine chisel are used to hand-cut milligraining around the band’s edge. Edwards notes that only platinum can support this level of workmanship. “You couldn’t necessarily make this ring in white gold,” he says. “The beading would disintegrate over time.”

Once the band is finished, the manufacturer solders on the platinum basket for the main stone, polishes the metal, and sets Kelly’s diamond in place. As a final step, the six prongs are hammered into beads at the tips, echoing the beaded design of the pavé diamond band.

Only eight weeks after their initial consultation, Lou and Kelly are seated once again in Rellas’ sitting room and presented with a small white box. Inside is another box of lacquered cherry wood. Lou and Kelly exchange looks before opening the box. “My heart’s in my mouth,” Lou says. Then, a moment later, he exclaims, “Oh my God, it’s perfect.”

Kelly turns the ring over and over, then immediately takes off her wedding band and puts the new ring on her left ring finger. “I love it,” she says.

“It’s perfect for my hand—so pretty and delicate.” As she turns her hand, the pavé diamonds sing like a small chorus behind the 3.5-carat stone.

The six-prong setting holds the large stone in restraint, and the openwork of the basket beneath the stone permits light to flow through.

“And,” adds Edwards, “the beauty of it is that as it ages, it will look more and more like something out of the ’20s.”

“I’m ecstatic,” Kelly says. “And my mother would love it. It’s classy. It’s classic. I can’t stop looking at my hand.”