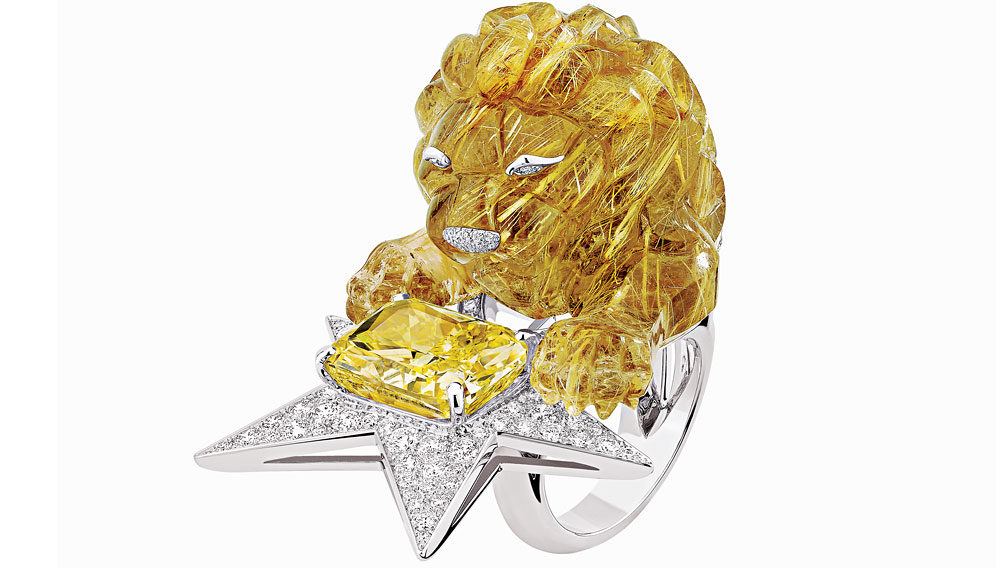 It was a spectacle of otherworldly beauty, a celestial dance of shooting comets and blazing meteorites. If Chanel designed the universe—and for one night at the planetarium at Paris’s Musée du quai Branly, the fashion house did—the galaxies would sparkle with diamonds and gemstones. There would be stars and leonine adornments glittering on long necklaces, a collar swirling in the shape of a shooting star, a comet brooch bursting with hundreds of white and yellow diamonds.

The planetarium show, held in July, was as dramatic as Chanel’s famously theatrical haute couture fashion shows—and a sign of how important the Biennale des Antiquaires, Paris’s biannual art, antiques, and jewelry event, has become in the world of fine jewelry. Both jewelers and collectors consider the exhibition one of the world’s foremost venues for artistic jewelry designs and rare gemstones. Chanel designed the planetarium presentation, which displayed the company’s jewels like a series of constellations, to introduce its elite clients and members of the media to the fashion house’s 80th-anniversary high-jewelry collection, which will make its debut at the Biennale from September 14 to 23.

This year’s Biennale will also feature such high-jewelry houses as Cartier, Van Cleef & Arpels, Bulgari, and Harry Winston, as well as Hong Kong–based designer Wallace Chan. Many of the pieces on display will exude an air of fantasy, with colorful jewels and flamboyant and whimsical designs, while other pieces will recall the brands’ histories.

For example, the celestial bodies that inspired Coco Chanel’s first and only diamond jewelry collection, which was unveiled in Paris in 1932, have inspired the house’s new anniversary series of 80 one-off pieces. From the shooting-star collar to a titanium cuff with diamond-encrusted moons and stars, the collection is the best example yet of the brand’s dedication to preserving its founder’s vision. “Mademoiselle Chanel designed fashion and understood what women wanted in jewelry,” says Benjamin Comar, international director of Chanel Fine Jewelry. “She knew jewelry wasn’t a trophy, but something women want to wear every day.” In keeping with the founder’s philosophy, the new jewelry is light and supple. Examples include a sautoir composed of strands of tiny pearls, with a large solitaire diamond at the center, and feather-shaped earrings dripping with rows of diamonds and pink sapphires. The collection’s lion-themed pieces are a reference to the founder’s astrological sign, Leo; one of the standouts is a sautoir with a lion ornament, carved from rutile quartz, poised atop a striking 32-carat yellow diamond.

Big cats are prowling at Cartier as well: The 138-piece collection that the company will debut at the Biennale includes sensuous new renditions of its iconic panther swathed in delicate gemstones. Another design in the series is a bracelet featuring a large snake wrapped around an opal the size of a plump berry. Cartier will also present a cache of large, sumptuous gemstones, such as a 236-carat aquamarine pendant necklace set in a gold-and-diamond cage with a large natural pearl drop.

French jeweler Boucheron is returning to the Biennale after an eight-year absence, with a 120-piece collection that draws upon its archives. The centerpiece is an intricate collar composed of flowers and butterflies in a range of colorful gemstones; its open, airy design makes it look like a jeweled garden fluttering around the neck.

For its Biennale moment, Van Cleef & Arpels is leaving nothing to chance. The company’s latest collection is based on objects thought to bring luck: the four-leaf clover, the numeral 8, frogs, and ladybugs. Taking its cue from a range of cultural references, the house spent nearly two years developing colorful designs, such as a ring with an octagonal-cut tourmaline sitting atop diamond-studded frogs, and a ladybug brooch showcasing a collection of rubies.

Lucky, indeed, is the wearer of any of the Biennale’s bright new stars.