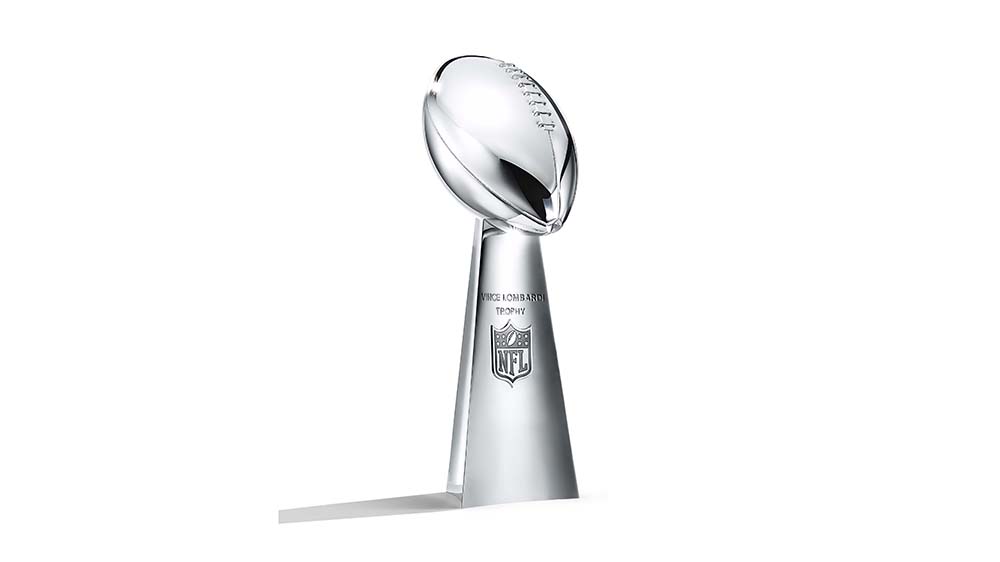 The Kansas City Chiefs and Tampa Bay Buccaneers put a lot of blood, sweat and tears into reaching this weekend’s Super Bowl. So, it’s only fitting that almost as much time and effort was put into the crafting of the trophy they’ll be battling it out over.

The winner of Sunday’s big game will walk away with the Vince Lombardi Trophy, quite possibly the biggest prize in North American sports. And the trophy, which has been awarded to every single Super Bowl winner since the first game in 1967, is still hand-crafted each year by its original designer: Tiffany & Co.

The trophy base’s three sides are soldered together.  Tiffany & Co.

Standing 22 inches tall and weighting seven pounds, the sterling silver trophy depicts a full-sized football in the kicking position. It was designed by Oscar Riedener, a former Tiffany vice president, who first drew it on a cocktail napkin during a meeting with the in 1966. Riedener’s design won over then-Commissioner Pete Rozelle and the jeweler has been making the trophy, which was named legendary Green Bay Packers coach Vince Lombardi in 1970, ever since.

After 55 years of making the trophy, Tiffany has the process, which employs for traditional silversmithing techniques—hand soldering, spinning, chasing and polishing—down to a science, but that doesn’t make it any less labor intensive. It takes four months to make each trophy.

First, the base’s three metal sides are cut and curved by hand before being soldered together to form the tower that holds the ball. Then, the ball’s two haves are soldered together, hammered and polished before the sterling silver laces are applied to its surface. Finally, the ball is connected to the base via a thread rod and the trophy is given one final polish before being shipped off to the host venue, which, this year, is Raymond James Stadium in Tampa.

The sterling silver laces are applied to the regulation-size football.  Tiffany & Co

The Vince Lombardi isn’t the only trophy Tiffany makes each year. The jeweler is also responsible for the top prizes in Major League Baseball and the NBA. It’s also not the only luxury company with its hand in the sports award world. In October, the Larry O’Brien Trophy was presented to the Los Angeles Lakers in a bespoke Louis Vuitton trunk.