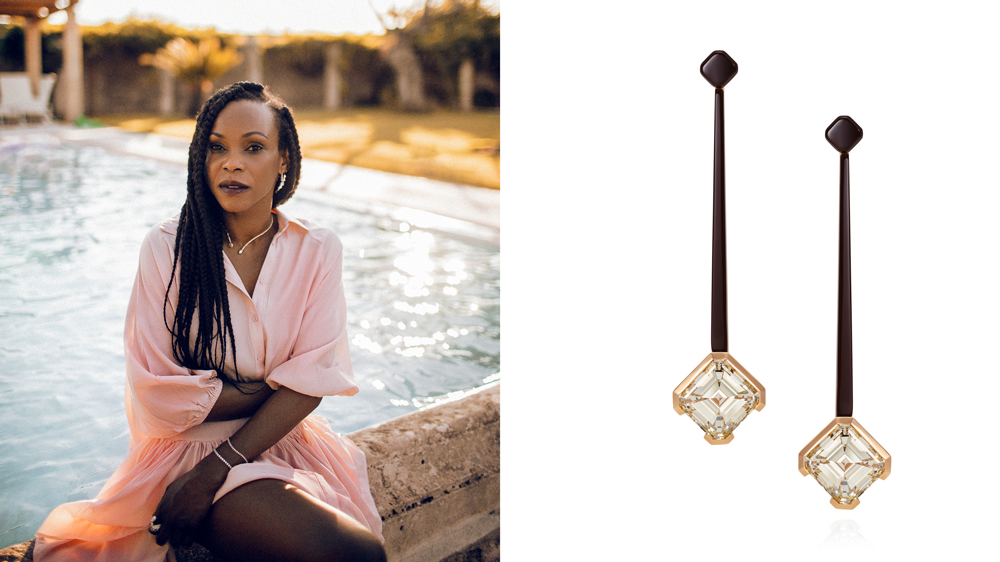 In the early aughts, when Thelma West was a student of gemology at HRD Antwerp, a respected training ground for the diamond industry, she used to dream about floating inside a diamond. “It was nine to five of the same thing, over and over again,” recalls the London-based jeweler, whose eponymous brand specializes in rarefied bespoke diamond jewels. “But it was fun. For someone who had no background or family in the business, I had a lot of passion for it.”

That enthusiasm is evident in West’s jaw-dropping collection of diamonds, which she places in refined yet distinctive settings designed to showcase the splendor of the stones. Even more enchanting than the jewels, however, is the story of how a young woman from Africa forged a singular path through the tradition-bound diamond trade.

Born in Lagos, Nigeria, West came to the U.K. when she was 16 years old to study engineering. “That did not work out,” she says with a laugh. A year later, she decided to follow a passion for diamonds to Belgium, where her science background came in surprisingly handy at HRD. “Understanding light refractions and how to cut a diamond — I found it easier than a lot of students,” West says.

In 2003, she returned to the U.K. and pounded the pavement of Hatton Garden, London’s jewelry district, in search of a job. A position as a diamond grader opened up at a big company that served the full spectrum of the trade, from chain stores to mom-and-pop shops to private jewelers specializing in large, fine gems. Within a couple of years, West was promoted to buyer, a role that found her traveling the world, negotiating with sellers, assessing a wide assortment of diamonds on the spot.

“It was beautiful the amount of diamonds I got to see,” West says. “You can focus on diamonds in a classroom, but if you’re not looking at them every day, you’re not learning much.”

The experience opened West’s eyes to the breadth of quality inherent in the diamond category. In 2008, when she was ready to run her own company, she and a business partner opened Yeraua, a diamond wholesaler with an emphasis on bigger, special stones.

“My partner was more into selling and I was more into buying,” West says. “My skill was maximizing the potential of a diamond: how to cut it, polish it and refine it to make it even more special.”

Yeraua, which means “diamond” in ancient Hebrew, developed a niche in finding older diamonds that were badly polished and needed to be recut.

In 2012, at the urging of a friend who asked her to recut an old diamond and make it into a special ring, West founded the jewelry brand that now commands the bulk of her attention. (She still sources loose gems for a handful of clients; her partner at Yeraua handles the rest.)

“I love to create around spectacular stones,” West says. “Usually, a client comes into my mind, and this person gets first refusal because of the buying history.”

The signature “TW” look includes a combination of fine lines and unexpected curves, such as the delicate curlicue of gold that hugs the spectacular 5-carat pear-shaped diamond at the center of West’s Rebel Rose solitaire. Commissions begin at £10,000 pounds, or around $14,000.

“I love pieces that can sit on anyone regardless of age or how you dress,” she says.

West is particularly bewitched by colored diamonds and fancy shapes. “I’m in the process of cutting a moval out of an oval,” she says. “It’s a marriage of a marquise and an oval.”

While West used to conduct her bespoke appointments in person, the pandemic forced her (and the rest of the world) on to Zoom, WhatsApp and Instagram, where she’s perfected the process of sharing design briefs and sketches.

“More people are able to discover me or at least reach out because they don’t feel the pressure to come into the office or travel to London,” West says. “But to sit down with a client and hear their story and actually translate that into a piece… ah, magic. I do miss those one-on-one consultations.”