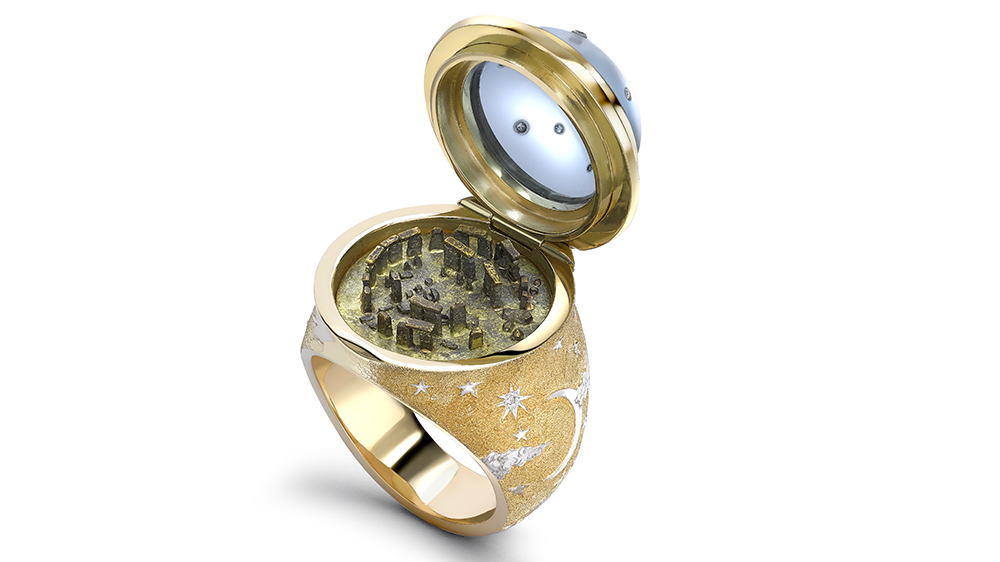 Imagine the god-like power you would feel wearing a prehistoric world heritage site on your little finger. Thanks to British jeweler Theo Fennell, now you can. The storied studio, which has been handcrafting jewelry on London’s Fulham Road for more than 40 years, just released a one-of-a-kind opening ring that has a mini Stonehenge as its centerpiece.

The rarity was designed to tribute both the ancient landmark and the summer solstice, which takes place on June 21 every year. This ritual has endured for a millennium and sees tens of thousands of people flock to the mystical stone circle to watch the sunrise and celebrate the onset of summer.

The exquisite 18-carat gold creation showcases a level of detail that is genuinely staggering. It features a blue tourmaline dome that is designed to mimic the night sky turning into dawn, and is encrusted with sparkling diamonds that represent the stars. One side of the ring is hand-engraved with moons and stars, while the other depicts a blazing sun. Beneath the dome lies the meticulous replica of the ancient monolith that is built to scale.

“The tiny Stonehenge is accurate to the last detail,” Fennell told Robb Report.

The miniature version of Stonehenge took more than six painstaking months to complete, according to the jeweler. He says it was a challenge his team relished.

“The more complicated the ring is to make and the greater the craftsmanship required the better as the craftsmen in our workshop love to show off,” he adds.

This is not the first theatrical opening ring the studio has released. Indeed, the site offers rings with everything from igloos to slain gladiators hidden underneath. There’s even a design dedicated to the Joshua Tree.

“The Opening Rings all have something hidden under them: a starfish under the sea or a pot of gold at a rainbow’s end, or something—like Stonehenge—more talismanic,” Fennell says. “I either draw the piece from imagination, like the rainbow, or from life, as this one is; a mistake as it was raining!”