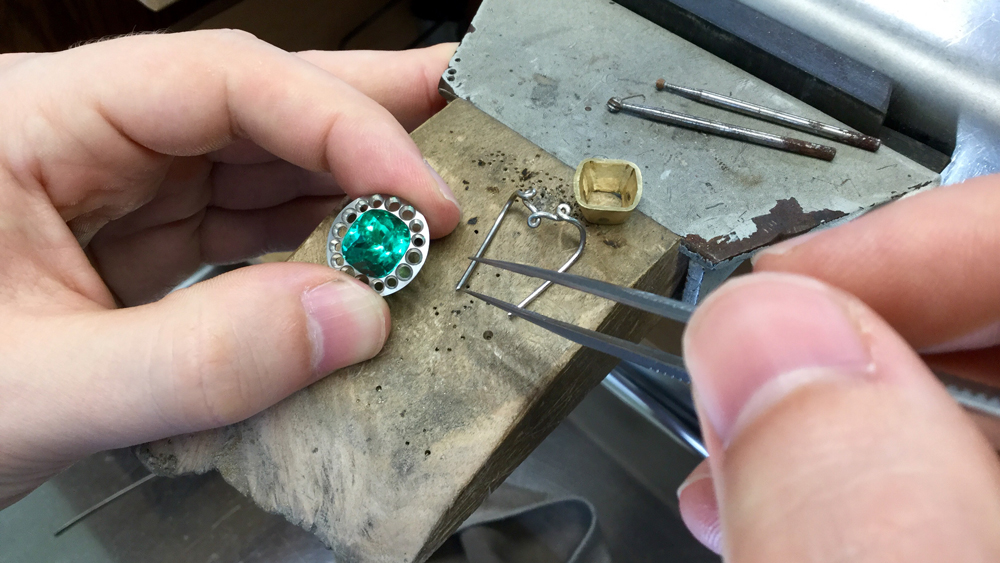 Learn the names of these young designers—they’re crafting jewelry that’s inventive, playful and refreshingly original. As one designer notes: “We don’t make products; we make art.”

From a remote beachfront workshop in Brisbane with dolphins frolicking in view, identical twins David and Michael Robinson are creating extraordinary jewelry. These pieces reflect the level of ingenuity and craftsmanship that one expects to see coming out of a revered Paris workshop, or in the windows of a Place Vendôme maison. But, in fact, “it’s just the two of us, no apprentices, squirreled away making the pieces that we want,” says David, acknowledging that their isolated lifestyle (they don’t even have cell phones) allows them to focus exclusively on their craft.

Relying on solar power and collected rainwater to operate their eco-friendly studio, the 40-year-old brothers make only about 15 pieces a year, and they’re not looking to increase production.

“It’s a passion, not work,” David says. That passion is manifested in the remarkable handcraftsmanship that shapes their uniquely decorative pieces: A radiant cushion-cut yellow diamond is framed with tiny diamonds and set within a large golden-pearl ring; a cluster of rare pink conch pearls is surrounded by undulating platinum petals paved with pink diamonds, rubies, sapphires, and spinels on a jeweled leafy ring, each slender edge lightly dusted with diamonds or gemstones so it subtly sparkles from every angle.

It takes years of training to achieve this refined craftsmanship, and their schooling started as young boys when they lolled away their afternoons in their father’s jewelry shop in New Zealand. When the family moved to Europe where their father worked at Chaumet and Backes & Strauss, the twins learned about European craftsman- ship. Returning to their native New Zealand, they made bridal jewelry for retail clients before moving to the more temperate Brisbane region four years ago to pursue their creative dream. For the first three years, they experimented, refined their craft, and created pieces without giving any thought of selling them. Once they posted their creations on Instagram, they were promptly noticed by Natalie Betteridge, whose family owns Betteridge jewelry shops in Vail, Aspen, and Greenwich, Conn. Her team didn’t waste any time convincing the brothers to allow Betteridge to become the exclusive David Michael distributor in America.

“I was drawn to their use of color, which has a painterly quality, and the intricate details of each piece,” says Betteridge. Being hand- crafted from start to finish, she says, gives the pieces a “nuanced finish unlike anything else.”

Committed to a pure process, the duo has shunned technology: Every piece is forged from a bar or plate of gold that is rolled, hammered, and stretched; they cut and set the stones and finish everything by hand. Michael says hand-forging the metal allows them to make it so fine that it essentially disappears and allows the stones to stand out.

Working side by side, often seven days a week, the brothers typically spend several weeks or months on a single piece. Their jewelry is largely inspired by the flora and fauna that surrounds them, each piece originating from a watercolor rendering painted by Michael. It takes them 200 to 300 hours on average to make a single design, and a recent creation, inspired by Michael’s love of 19th-century hand- painted miniatures, was more than 400 hours in the making. He painstakingly painted an oil rendering of a koi fish on a slice of mother-of-pearl, covered it with a thin, portrait-cut aquamarine to create an illusion of the fish underwater, and surrounded it with green tsavorite foliage and rough gray diamond cubes that emulate cobblestones. The masterpiece can be worn as a brooch or pendant necklace, and also comes with a small stand so that it can be exhibited. That’s just how they see their work. Says Michael, “We don’t make products; we make art.”

The stylish Lauren Khoo sits down at Casa Lever in New York in late September to discuss her new jewelry collection. “It’s about personal symbolism and romanticism,” she says, and then identifies the significance of her own jewelry. The two diamond tennis bracelets on her wrist belonged to her grandmother, the men’s rose-gold Rolex Daytona watch was a gift from her parents when she graduated from Brown University, and the matte-gold set of oval bangles on her other wrist are engraved with her grandfather’s name and his favorite saying.

“I’m inspired by the Victoria era because so much of that jewelry was connected to sentimentality,” says the 32-year-old. But that is as far as the connection to the Victorian era goes. Her contemporary designs are playful, like the mismatched ivy earrings (one is short, the other long) covered with deep-green tsavorite gems and inspired by the ever-present foliage during her four years in New England. Another pair of earrings features a cherry- blossom design with pink- sapphire and diamond petals closed in one silhouette and open in the other. The gummy-bear pendants in blue quartz, black onyx, or pavé diamonds look like her favorite candy. “My crafts- men didn’t understand what I wanted from the sketch so I brought them Haribo gummy bears, and they caught on fast,” she says with a laugh.

Her passion for jewelry began while observing her mother and her grand- mother (part of Singapore’s Khoo family dynasty), who had a big jewelry collection. “I noticed that my mother and her friends wore the same handbags and jewelry from Cartier or Van Cleef— it was like a uniform,” she says of growing up in Singapore. “I wanted to create bespoke jewelry so women could express their individuality.”

To that end, she unveiled her recent collection in Singapore, where women can preview her original designs. Each piece is custom made to a client’s specifications, including size, stones, and other modifications. “Every piece should connect to a woman’s story, whether it’s a certain stone or a symbol,” she says. The engraved gold bracelets are among her most popular designs.

Her latest collection explores putting pearls in a modern context by pairing tiny orbs with diamonds in Cosmos—which appear like large starbursts. “When people think of pearls, they think of Barbara Bush or the Flintstones’ [old-fashioned necklaces], but pearls are beautiful and feminine, and I want to reignite the conversation.”

“Growing up in Miami, I’m obsessed with color,” says David Gusky, who spent nearly three years searching workshops across Europe to uncover new methods of applying color in jewelry. Rather than turn to big gemstones for bold color, Gusky decided ceramic was the optimum alternative because it offered a limitless color palette—including his custom-made mint- green and lemon-yellow— and was sturdier than enamel or gold.

His search ended in Paris, where he found a team of artisans who worked with him to develop an arduous method to integrate gold and ceramic colors in stylized, everyday designs. Each piece starts with a block of 18-karat gold, from which craftsmen extrude his signature arch shapes. They then apply layers of hand-lacquered ceramic inside the crevices, and it’s hand-polished to create a flush, smooth finish. The skillful process takes between six to eight weeks to make a single piece.

“The sleek ceramic finishes reminded me of the vintage cars that I grew up restoring with my father,” says the 30-year-old entrepreneur. “This is more similar to how watch cases are crafted with a level of precision that can’t be achieved with traditional jewelry casting, which requires heating and can make the metal porous.”

Five years ago he opened a salon on Rue de la Paix with neighbors like Cartier and Van Cleef & Arpels, as well as his own workshop employing about 40 crafts- men working on the ceramic collection and a series of one-of-a-kind jewelry designs. His signature Arch motif is influenced by both the clean lines of Art Deco design and Italy’s Palladian villas. “I was moved by the shape of the arch because it reminds me of something romantic,” says Gusky, who spent a lot of time traveling in Italy with his parents who were jewelry manufacturers. “When I looked through archways, I always saw something incredible—a window to another place.” He even translated the shape into his own proprietary diamond cut, the Davidor Arch Cut, applied to the signature designs. Gusky’s latest series, L’Arc Deco, features ruby, sapphire, and diamond Arch Cut stones set in platinum jewelry. The ceramic designs, though, are quickly becoming a collectible among his Paris clients, he says, with women buying two or three at a time. “Women want to wear their jewelry every day and have fun with it, and the ceramic jewelry is pretty much indestructible.”