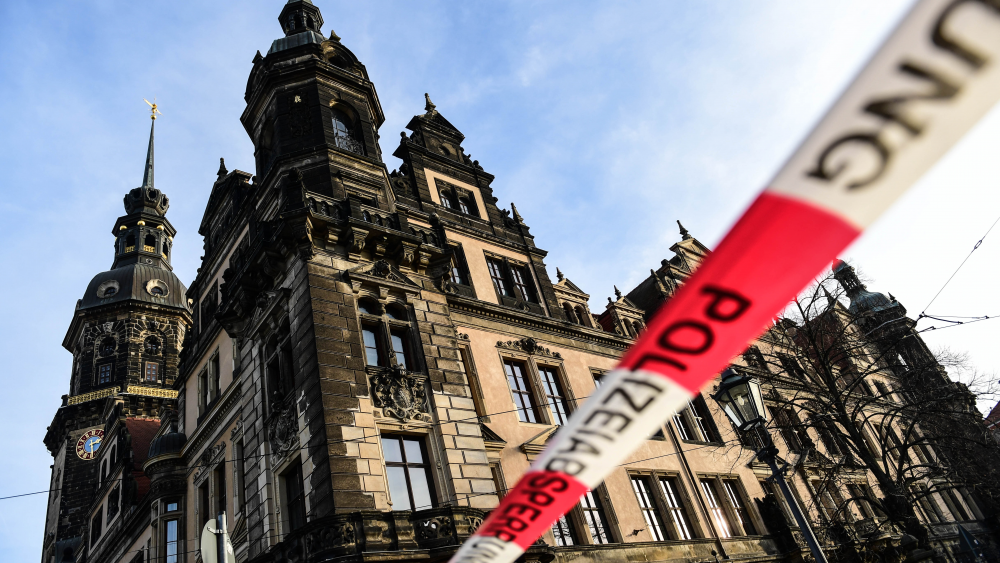 A cache of priceless gems was stolen from the Grünes Gewölbe (Green Vault) museum at Germany’s Dresden Castle on Monday morning, in what some experts estimate is the museum’s most devastating loss since World War II.

The museum contains the largest collection of treasures in all of Europe, so it’s an understandably appealing target. The thieves made off with three out of the museum’s 10 diamond sets—each consists of 37 pieces. A fire broke out at a nearby electricity junction box before the heist, which some speculate cut off the museum’s alarm system. The perpetrators then broke in by removing an iron grill from a ground-floor window and smashing through the glass.

Surveillance footage reveals that once inside, two individuals entered the Jewel Room and broke open a display cabinet. Volker Lange, the head of Dresden police, told The Guardian it was in “a targeted manner.”

Police have set up roadblocks, but proximity to the autobahn may have already allowed the thieves to escape. A burning car was found following the heist, which some believe may have been a tossed aside getaway vehicle. (At least one report claims the duo escaped in a limo.)

The police initially estimated that the jewels taken were worth well over €1 billion, but others have called the loss immeasurable. “They’re priceless—we can’t put a figure on it,” Marion Ackermann, head of the Dresden state museums, told the BBC. “These items can’t be sold on the art market legally. They’re too well known.”

Fortunately, because of this notoriety, it’s likely the thieves will be traced while trying to sell the diamonds. Unless, of course, they can find a discerning buyer. “The thieves might find an oligarch who is willing to pay to hide the pieces in a private vault, only showing them to his or her most trusted circle,” says 77Diamonds managing director Tobias Kormind. “And, if they’re not caught in the next few days, the chances decrease dramatically that the goods will ever be recovered.”

Mercifully, one of the museum’s most famous treasures remains out of reach: The Dresden Green Diamond, which is currently on loan at the Met in New York.